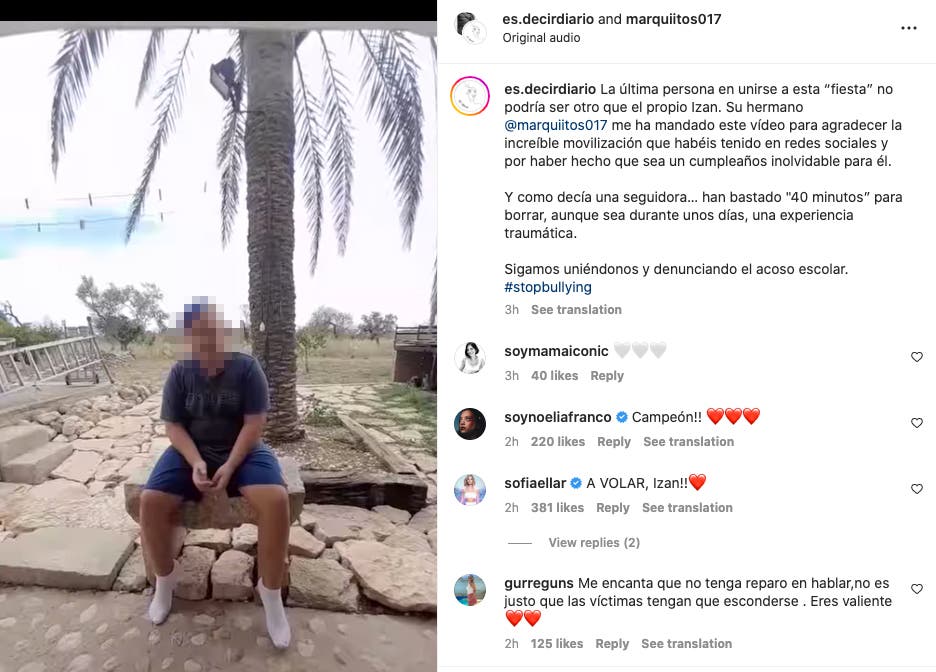 A boy in Mallorca who was bullied by classmates during a summer camp has been inundated with messages of support from celebrities and sports stars after the child’s brother shared a video of the harassment.

The 11-year-old, whose name is Izan, was mocked by classmates on his birthday. In the video recording, his bullies can be heard calling him “fat” and “seal”. The child can be seen in the Es Puig de Lloseta school’s playground while being mocked.

In the message that accompanied the video, Izan’s brother explained that “first thing this is [Izan] ‘ when he returned home ‘was to burst into tears and say that this life is terrible and that he didn’t want to live anymore’.

The brother also explained that the video was taken by one of the bullies with the aim of sharing it on social media.

The video has since gone viral and was positively received by Spanish celebrities including Eurovision singer Chanel, Unidas Podemos party leader Ione Belarra, internet celebrity Ibai Llanos and soccer player Antoine Griezmann, who sent Izan a message to tell him that “this life is beautiful” and to invite him to an Atlético de Madrid match at the Wanda Stadium.

In response to the news, Izan released a video thanking everyone for the support and birthday wishes, saying they “really cheered him up” and advising anyone who’s suffered similar treatment to “try to ignore it.” ‘ and ‘to take the necessary measures’. take”.

The child’s family also criticized the school’s staff for not doing enough to prevent the bullying, saying he had suffered from the abuse for four years.

However, the school said it was considering legal action against the family because a private company operated the summer camp where the incident occurred, despite being on their premises.

School bullies kick and hit an 11-year-old girl in the toilet on Spain’s Costa Blanca, posting a video on social media