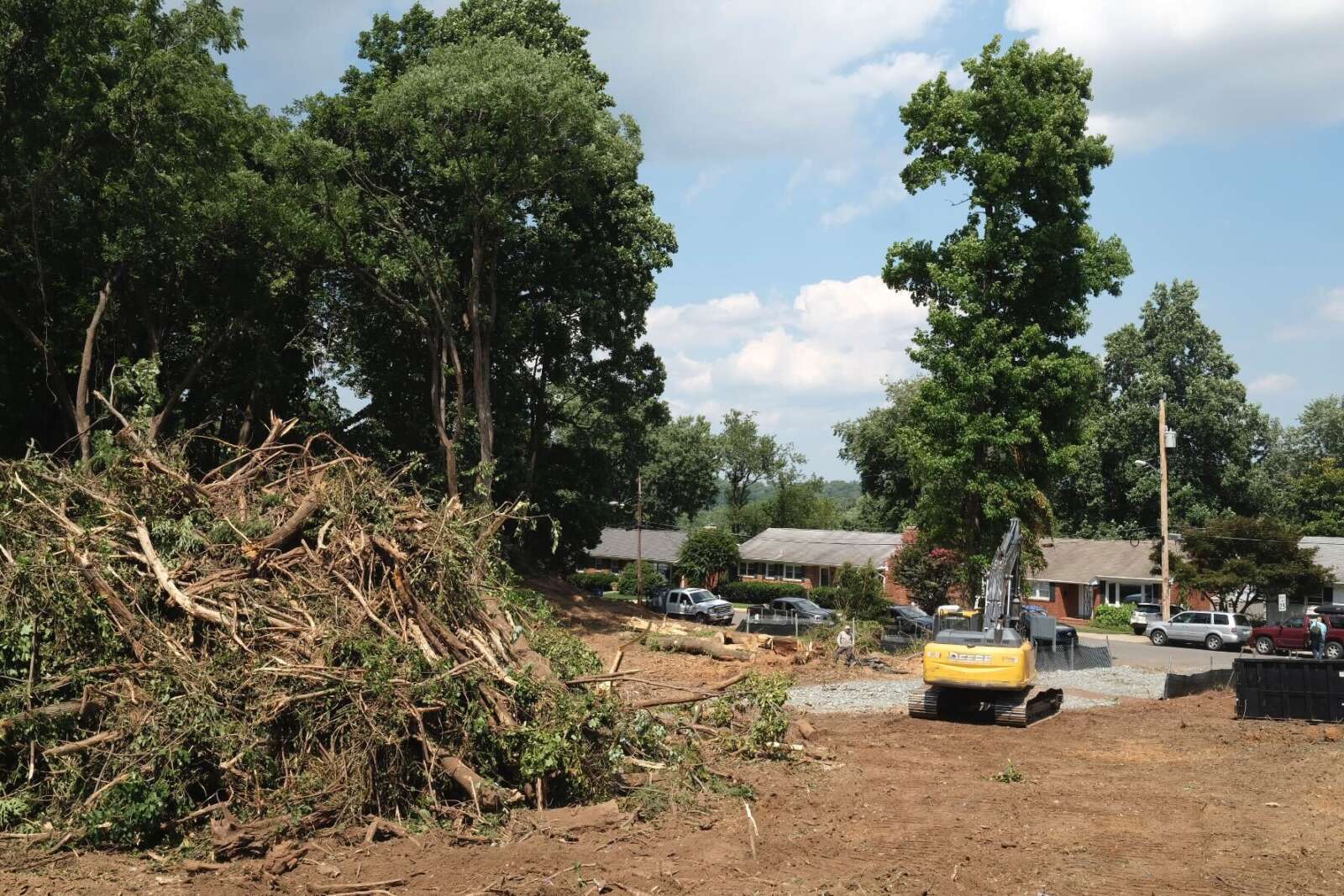 (Updated at 10:15am) Work continues on the former site of the Febrey-Lothrop House, also known as the Rouse Estate, in the Dominion Hills neighborhood.

ARLnow viewed and took photos of apparent excavation activity at the site at 6407 Wilson Blvd last week, including the removal of trees.

Following the sale of the property late last year, the property is now owned by New York-based Kennedy Lewis Investment Management, according to county ownership records. About 40 single-family homes are to be built on the site, called The Grove at Dominion Hills, by construction company Toll Brothers.

More on the housing plan below from an update released by the Dominion Hills Civic Association last month.

Toll Brothers stated that most houses would be about 45 feet wide on lots about 60 feet wide; Lots vary in size though, most being around 8000 square feet. The homes would be customized to the buyer with a variety of exterior colors as well as interior options.

The audience was also curious about the schedule for the construction. At the time of the meeting, Toll Brothers officials indicated that grading work at the Madison Street sites could begin as early as six weeks into early May, which would be approximately mid-June 2022. However, it all depends on Arlington County’s permitting process. If the schedule goes ahead as planned, homes are scheduled to be built by the end of July, and as the representative put it, “You could have new neighbors by February.”

Home prices are expected to start at around $2 million.

ARLnow reached out to the investment company regarding the work currently underway and whether they are collaborating with archaeologists or historians at this stage. Local conservationists previously claimed the site – which was once home to up to 15 enslaved people and may also have been used by an Indigenous hunting ground – is historic and may contain artifacts, although a county board report described artifacts as “speculative”.

“We have no comment on the matter,” a company spokesman wrote back in an email.

In March 2021, the historic Febrey-Lothrop House, located on the 22-acre lot at the corner of Wilson Blvd and N. McKinley Road, was demolished. This comes after a long battle by local preservationists, including the Arlington Historical Society, to save the aging home and estate from demolition and development.

However, attempts to persuade the county to purchase the site or give it a local historical designation have failed.

Parts of the house may at least date back to the Civil War, including an ornate wooden compass base that was incorporated into a former library, preservationists argue.

At the end of the 19th century the house was sold to department store magnate Alvin Lothrop. He demolished most of the previous structure to build his own colonial style home inspired by George Washington’s Mount Vernon.

The house remained in the family after Lothrop’s death but was reportedly leased to Howard Hughes, the famous aviator, inventor and businessman. He threw lavish parties there, inviting guests like movie star Jane Russell and Washington soccer team owner George Preston Marshall.

The home and estate—which was even more sprawling at the time—were sold in 1951 to Middleburg, Virginia-based developer and amateur steeplechase jockey Randy Rouse. He broke up most of the property to form the surrounding neighborhood but kept the home and the near-by property.

Adding another touch of Hollywood history to the home, Rouse married Audrey Meadows, who had just been cast on TV show The Honeymooners. But commuting from Arlington to New York to film reportedly strained the marriage, and they divorced soon after.

Rouse owned the home until his death in 2017 at the age of 100. A trust in his name owned the property but defied historical designation and decided to sell the property for rehabilitation. Ultimately, the house was demolished early last year.