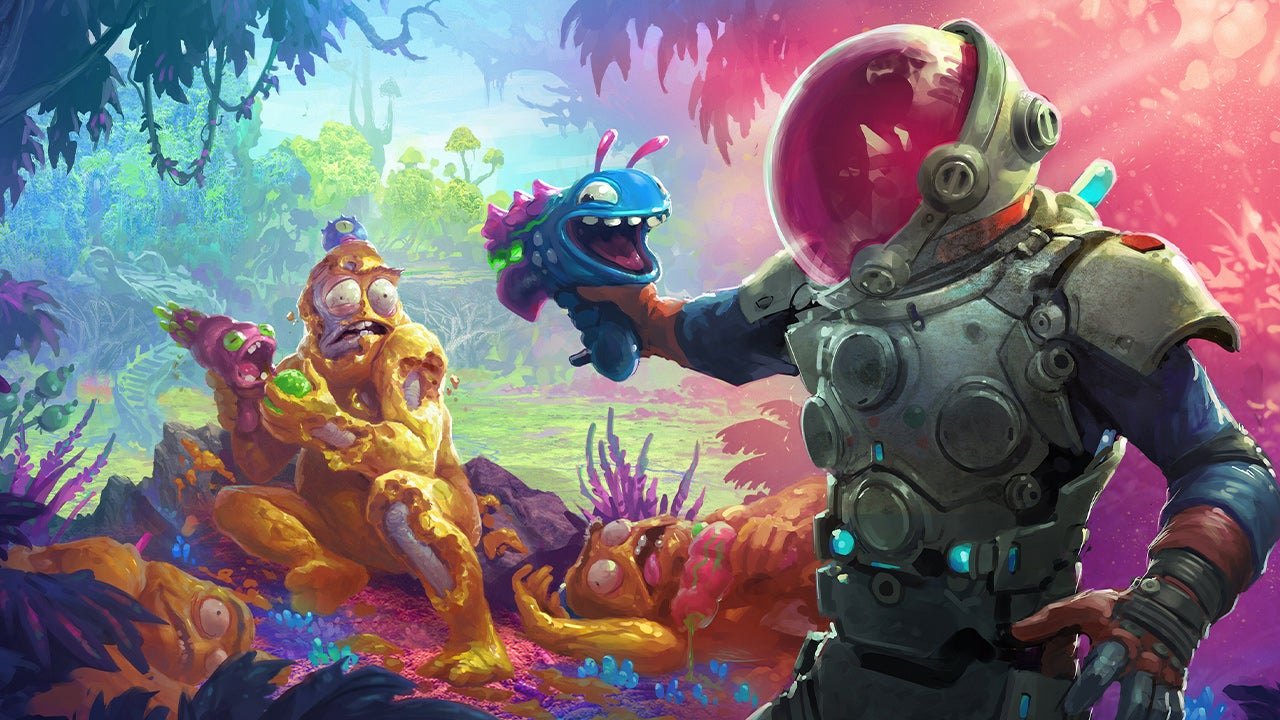 High on Life, a new comedy FPS from Rick & Morty co-creator Justin Roiland and his development studio at Squanch Games (creators of Trover Saves the Universe), was announced at the Xbox Showcase yesterday and will be released for Xbox and PC later this year. To celebrate, Roiland has created a new animated short, which you can check out above. He also discussed the project with IGN.

IGN: What did you learn about the process of writing and creating video games from Trover, and how are those learnings applied to the new game?

“There’s a lot of content in this thing. Worth a few runs.”

Justin Rolland: I feel like writing a game is like writing some TV seasons, but it’s TV that people can reach into and poke around and play around with. We love having (as much as possible within our development time) surprising answers to this nosing around. But also branching off of narrative paths, conversation/dialogue trees, a lot of jokes that maybe only 2% of the players will actually hear, and above all, good timing in the dialogue edits, especially when there are a lot of moving parts (dialogue-wise) that the players are controlled. I guess all of this is to say that we learned A LOT making Trover, but a big difference for me is how to do all the things I mentioned earlier in the same answer, just a few sentences ago. Go back and check it out. It’s only about 4 or 5 sets back. Good luck hunting! But something else that we played with a bit in Trover but then beefed up A LOT in High on Life is the player selection stuff. So SO much more. Also much more useful things. Depending on so many things the player does/chooses, different things will happen. From basic decisions like which cartel leader to hunt down and kill first, to talking to your sister and Gene, to some super small, seemingly inconsequential things you can do that end up being more than you ever have would have thought. Just a ton of it. We wanted to aim for a dense selection of story-style stuff for players. We look forward to hearing people compare how differently things were based on some of those decisions. A LOT of content stuffed into this thing. Well worth a few runs.

IGN: The list of first-person comedy – in games or other media – is pretty short. It seems like guns are a way of conveying comedy in this game. Are you a first person shooter fan yourself and why did you choose FPS for this project?

Rolland: I can think of a few! Stanley Parable springs to mind, Portal 1 & 2 maybe some of the far crying weird DLC games? Some stuff from the Borderlands series? Duke Nukem? Maybe the game Postal 2? Was 2 the good or the bad? Matt McMuscles, some help? no I mean… I guess it depends on what you call comedy. The point is that there is a ton of great comedy in FPS games if you look closely. Flip these bricks on Steam. A salamander of FPS comedy can scurry out. TAKE IT! QUICKLY! Crap. It’s dead. You were too slow. I wish there was more comedy stuff but the world hasn’t exploded yet so there’s still time. In High On Life we ​​use the weapons both as companions and as upgradable weapons. They each have their own unique personality and dialogue in each and every situation, so there’s a lot of player choice (once you’ve acquired more weapons), which weapon you want to hear about the most or use in a particular NPC encounter, and yes, they are really funny. We were really lucky with the cast across the board, but the comedy in this game really comes from all over the place. Not sure what exactly to hold back on in terms of info, but there are LOTS of hilarious/bizarre aliens you’ll meet, some awesome technology that lets you warp into weird random parts of the cosmos, and those things are just amazing, tons of skits and cartoons on TV at home and around the world. The weapons are massive and extremely important, but definitely far from (no pun intended, seriously) the only source of comedy in the game. One of our main pillars for this game was comedy, so it’s part of the cellular makeup of High On Life. Aside from some aspects of the story that we definitely want to land with some semblance of weight and just lots of solid level design, I can’t think of anything the Squanch team has created for HoL that wasn’t driven by comedy. And the last part, yes. I’m a big FPS fan, but I fail at online team-based games. I’m also failing Halo and the newer Doom games. Fast twitch shit, no thanks. If I can, I build Lego sets all day long. Shit slow for me please A little more Nintendo, a little less QWOP, you know? I lean more towards single player games that have a good balance between story and action. Give me RPG elements in a shooter. Give me weird NPCs…God the perfect example to wrap it up is Fallout 3 and Fallout New Vegas. I could go on and on, but it’s almost 3am and I have to get up at 8:30am. Uff.

IGN: The animated short definitely has an improvised feel to it. Did you just jump into the VO booth and start ripping?

Rolland: We have LOTS of interdimensional cable style sketches in this game. A LOT OF. And not all me. Joel Haver and my senior writer Alec Robbins also did some work. They’re weird and great and very VERY clearly improvised with no discussion or really anything before rolling. Boom, we’re rolling. “Hello, uh, I’m Mr. Guide! And welcome to the rich and signpost lifestyle,” or some weird shit came out. We should actually get this “signpost people”. I could do something with that. But yes, we recorded a lot and as the game progresses, new ones will appear on the TV. Some only play in specific alien cities on the large Blade Runner promotional screens. Also SUPER IMPORTANT NEWS EXCLUSIVE!! In this game you can also fly a spaceship and drive every car you see and we have 100,000 fully built planets all unique from the start filled with their own unique race of characters that have millions and trillions of lines of dialogue, and she CAN turn into a dinosaur. And a cat in a robot city. We’ve got an entire game’s worth in this one section where you’re that cat wandering through a cool city of robots. It’s super neat. Never done. JK!! I did the whole thing with Hello Games. Nobody’s heaven. Do you remember? (Google it) I’ve always wanted to do this. Goddamn. I wanted it so bad but everyone said no. It is not good. So yes, all that I said, the game has (according to the comedy sketches) a lie and I’m sorry.

IGN: Does any of your work end up on the cutting room floor? If so, did you have any fun ideas from Trover that didn’t make it into this game that ended up going well with this one? Or stuff from that that will end up making it into Rick & Morty? I’m curious because I imagine you don’t want any fun ideas to go to waste.

“We recorded a level in Trover while I was drinking slowly the whole time. We went in order of the level progressing and you can REALLY hear the alcohol coming through when you get to the first big boss fight in Fleshworld.”

Rolland: The boring answer is yes, but it’s almost always scale/budget. Trover had extra levels that we had to cut that killed me to lose. But they needed new systems that might eventually be used and some other nonsensical developer talk, so they had to go because we had about $3.5 million to make Trover. That’s crazy. I know it sounds like a lot, but ask a guy with 200 bitcoins if it’s a lot. He’ll probably tell you “yeah it’s a lot” but it’s not a lot to make an entire game, QA localized in God knows how many regions, more QA and bug squashing AND marketing?? It’s definitely not a mystery why most people don’t know about Trover. So back to the question – when it’s not about scope/budget, we’ve had a few block-in levels where we found we just didn’t do a good job writing it. We messed it up. And we also had this problem: focus testers didn’t know who was speaking. It was a big disappointment because it was totally my fault. We had the brilliant Reggie Watts record for about four freaking hours for this level and we had to rewrite a page one (Fleshworld for anyone wondering) and Reggie got too busy and wasn’t available to finish before the deadline for this one VO coming back so we spit out the new level and we just dived in and I almost did all the voices. We recorded it while I was drinking slowly the whole time. We’ve taken it in order as the level progresses and you can REALLY hear the booze when you get to the first big boss fight in Fleshworld. That’s actually where we called it for the day haha. I actually find this level hilarious. And I hate a lot of my stuff after it’s done. This level somehow makes me laugh every time. All four times. Finally, in HoL, we’ve squeezed in a surprising amount of the entire game. But with a game like this, where you’re building an entire universe and backstory for so many different characters and races, there are just SO many good ideas. Too much awesome stuff and sure if we had $50 million to make this game awesome. throw everything in But we don’t do it because NO ONE BELIEVES IN US!!! JK So yeah, we had to put some cool ideas aside. Nothing anyone would ever notice as missing. Just things we know we love and will definitely come back to at some point. And for the last part, there really isn’t much cross-pollination between the TV side and the gaming side. Just really different sandboxes. Please check your spelling and make me look smarter than I actually am. Thank you IGN. [Editor’s Note: You got it, Justin. No problem!]