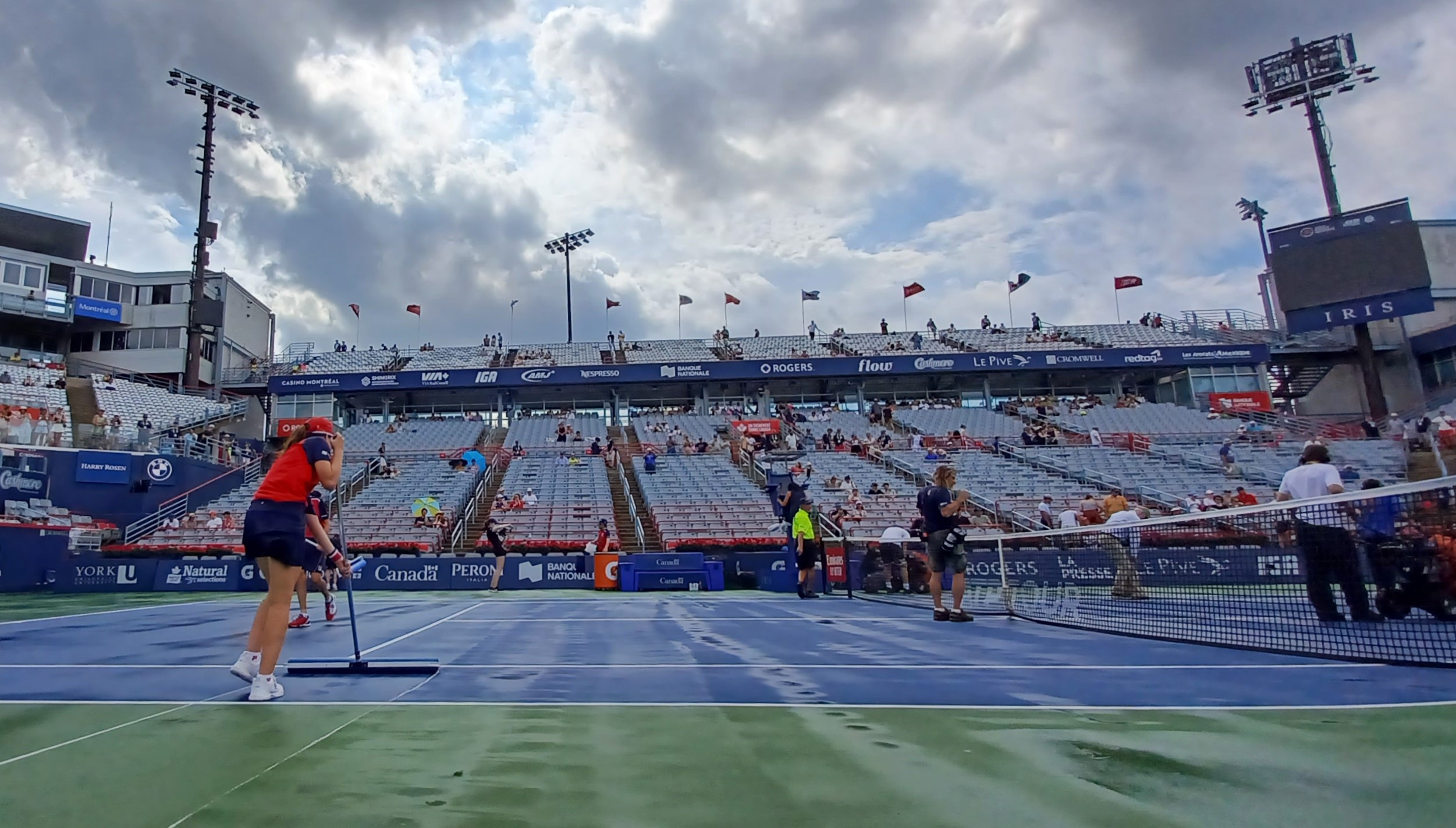 Even with decades of experience, and despite the know-how of the 1,500+ people making sure the tournament runs smoothly, when Mother Nature decides it’s time to take a break, take a break.

Does this mean a catastrophe?

“No,” said tournament director Eugène Lapierre, who has spent the last 29 years with Tennis Canada. I asked him what goes through his mind when bad weather hits and he replied, as zen as ever, “Well, we’ll wait until it rains. That’s all.”

Clearly the word panic long gone from his vocabulary. In fact, he lives by a very simple principle: don’t waste energy on things you can’t control. Just track the weather radar and wait.

“I’ve been asked the same question for over two decades. What do we do when it rains? Well, let’s stop playing,” he added with a smile. “Then we wait for the rain to stop, dry the courts and start again. Those are the basics and that’s all you can do.”

Here, the always cheerful and philosophical Eugène Lapierre likes to quote Rafael Nadal. In an interview after a match in which his opponent rained aces on him, he was asked how he dealt with it. Rafa simply replied that he was waiting for it to pass. “Like the rain!” Lapierre concluded with a chuckle.

Get the pitches dry

The rain has spared few editions of the NBO, so the team really knows what they’re doing.

With good logistics and the latest technology, the courts can be dried very quickly, often in 15 or 20 minutes.

But when it’s pouring rain, everything is on deck, from the good old towels to the absorbent rolls to the giant dryers, affectionately called ghostbusters due to their resemblance to the ghost suckers in the film. The 16 machines cost between $3,000 and $4,000 each, but it’s worth the investment.

The word Proud comes up a lot in the big boss’s comments, and everyone pitches in. It’s not uncommon for a few managers to grab a towel and join the volunteers or redirect efforts.

In this shot, directly to Eugène Lapierre’s right are tournament referee William Coffey and Nicolas Joël, director of the IGA Stadium. That pretty much says it all.

Despite the rain delays and cancellations, the tournament is usually able to present the full program and finalize the draw.

But in 2010 the rain was so heavy that no games were played on Saturday and Sunday. Semi-finals and finals took place on Monday 23 August. In the end, Caroline Wozniacki defeated Vera Zvonareva and took home the trophy.

That’s not the most surprising story, however.

“One year the doubles final was interrupted by rain and we finished it in another country!” Lapierre recalled. “Back then, our tournament was later, just before the US Open. So everyone traveled to New York to play the doubles final at a Canadian tournament. The referee carried the balls with him.”

what about the roof

The question that inevitably comes up year after year is about the roof over Center Court, which would help avoid all the inconvenience. “Three years ago we were close to a solution, but of course the pandemic changed everything financially,” explained Eugène Lapierre. “We would have to rethink the budget. We’d love to have a roof, but I don’t think we’ll be making an announcement anytime soon. The good news is that we’re getting encouraging signals from the professional tours that we’re on our way for the long haul. But with climate change, whether it’s violent thunderstorms or extreme heat, we always have to remember to build a roof and protect our show.”

In the meantime, everyone stays positive and trusts the team – and them ghostbusters– to keep us dry.