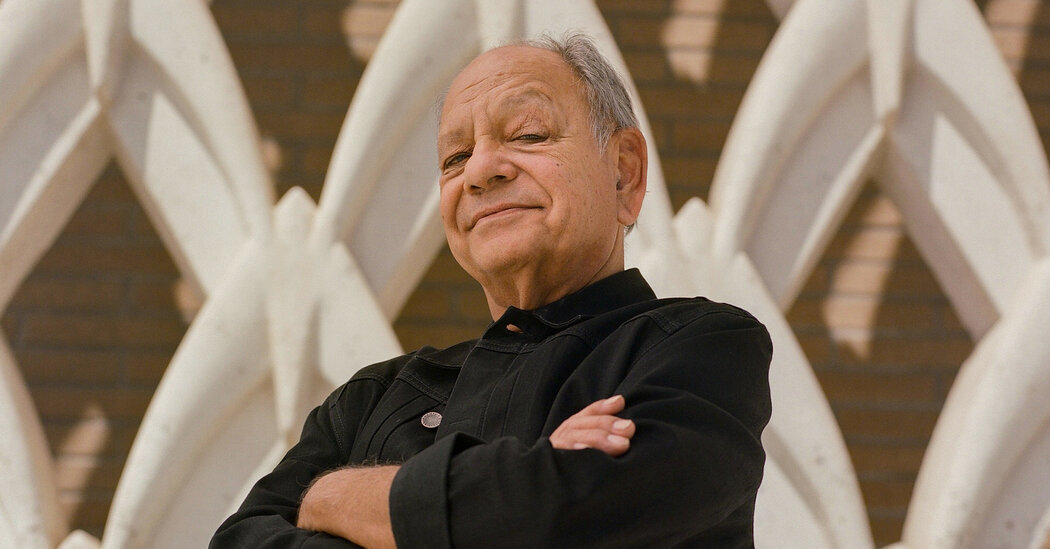 RIVERSIDE, California — As a child, Cheech Marin loved to collect objects — baseball cards, stamps, marbles — and then obsessively organize them.

“I had a mania for codifying them and putting them in some sort of collection or whole set,” said Marin, 75, who is best known as the mustachioed Chicano half of classic stoner comedy duo Cheech & Chong.

In the 1980s, fueled by steady film and television work, Marin’s natural inclination to collecting found its fullest expression when he fell in love with the work of Los Angeles-based Chicano artists such as John Valadez, George Yepes and Patssi Valdez.

Her works, which synthesized Mexican and American influences and “delivered news from the front lines,” felt enlightening, like hearing the Beatles “for the first time,” said Marin, who grew up in South Los in a Mexican-American family in Los Angeles third generation growing up in Angeles and the San Fernando Valley.

Since then, Marin has amassed a collection of more than 700 paintings, drawings, sculptures, and mixed media works by Chicano artists, including notable works by Carlos Almaraz, Frank Romero, and Judithe Hernández. In art circles, Marin’s trove of Chicano art is considered the largest such collection in the world.

Now, Marin’s collection has permanent residence at the Cheech Marin Center for Chicano Art and Culture (known as “The Cheech”) in Riverside, California, a majority Hispanic city of about 330,000 people about 55 miles east of Los Angeles in the vast Inland Empire region in Southern California.

The center, housed in the former Riverside Public Library, may be the first museum in the United States dedicated to exhibiting Chicano art and culture. Marin hopes the project, a public-private partnership with significant community investment, will inspire a renaissance of sorts for Chicano art in the Inland Empire, once the cradle of California’s citrus production and one of the nation’s fastest-growing and most ethnically diverse regions.

On a recent tour of Cheech ahead of opening day on June 18th, Marin was in high spirits. He paused to admire the masterful brushwork in Romero’s Arrest of the Paleteros and the “cannonball” of color in Almaraz’ unnervingly sublime Sunset Crash.

“The history of the Cheech is a happy one,” said Todd Wingate, curator of exhibitions and collections at the Riverside Art Museum.

In 2017, Wingate and former Riverside City Manager John Russo gave Marin the idea of ​​creating a museum based on his collection. At the time, the city was looking for a new tenant for its landmark public library building, a two-story, buff-colored modernist building in the city’s historic core. Marin’s touring exhibition of works on paper, Papel Chicano Dos, recently attracted a record number of visitors at the Riverside Art Museum. In return for Marin’s donation of his collection to the Riverside Art Museum, the city would pay for its housing in the old library building.

“It didn’t take any convincing,” Wingate said. “I think Cheech has just started thinking about where his collection goes.”

“If you’re thinking about it, a collection of the size and caliber of Cheech’s collection, not many places will be able to accommodate it,” he added. “A lot lives only in memory.”

Under a 25-year partnership agreement, the Riverside Art Museum will manage the Cheech, and the city will contribute approximately $1 million annually to cover operating costs.

The Riverside Art Museum funded the approximately $13 million cost of the library building’s renovation, primarily through a $9.7 million government grant and private donations. The center is expected to generate $3 million in admissions over the first ten years of its existence.

Riverside Mayor Patricia Lock Dawson, who took office after the Cheech partnership was finalized, says she received no opposition over the investment. (Notable praise came from a local candidate for the Republican state assembly, who tweeted it a “stonehead art museum”).

Mayor Dawson believes Cheech will attract people from all backgrounds, including international visitors. “I saw an article about it in the Japanese art news recently,” she said. “If you’re from Southern California, you’ve experienced Chicano culture at some point, right? But it is also interesting for people in other parts of the world.”

“All parties involved want Cheech to be self-sustaining,” said Drew Oberjuerge, executive director of the Riverside Art Museum, who expects most of the revenue will come from grants, fundraising, membership sales, entry business sales and facility rentals.

For nonprofit arts organizations in the Inland Empire, the region’s lack of public arts funding and philanthropy is an ongoing challenge, Oberjuerge said. Federal funding disproportionately favors coastal communities and large urban centers like Los Angeles, San Francisco and San Diego, she said. A report found that nonprofits in the Inland Empire received $25.55 per capita in donor support, compared to the national average of $262.99.

To raise the $3 million initial investment needed to get the project started, the Riverside Art Museum relied on volunteers and Unidos, a local collective of Latin American community organizations. Her campaign spawned several Chicano-themed fundraisers, including a “Pachuco Ball,” a Los Lobos (longtime friends of Marin’s) concert in downtown Riverside, and an upcoming “Chicano Gala” at the local convention center. Dozens of Riversiders have completed a five-year payment plan to contribute $5,000, the minimum donation to earn a spot on the center’s founding wall, said Ofelia Valdez-Yeager, a retired Riverside school board member who led the first campaign.

Marin’s ambitions for Cheech are only a few degrees away from world domination, including developing a film program helmed by film director Robert Rodriguez, with whom Marin has made several films. It will train independent filmmakers in the principles of low-budget filmmaking, Marin said.

María Esther Fernández, the Cheech’s first artistic director, formerly chief curator and associate director of the Triton Museum of Art in Santa Clara, California, said the Cheech will also distinguish itself as a “dynamic scholarly hub.”

“We are really in the early stages of establishing the center as an education and research center, a place that will generate research on Chicanx art and support that scholarship and emerging museum professionals,” said Fernández. Two curatorial and conservation research grants designed to help increase Latinx representation in museums and archives will be housed at the center, she said.

Both Marin and Fernández want to position the Cheech as a place for “undisputed dialogues” about issues of identity, representation, gender-neutral terminology, and the mother of all questions: What exactly is Chicano art?

“Is it a style?” said Marin. “Do you have to have the right vaccinations to make Chicano art? Do your parents have to be Mexican or maybe just one?”

“I want to have this conversation,” he added.

The center’s basic mission, Fernández said, is to showcase artworks that other museums don’t show. According to a 2019 Williams College study, only 2.8 percent of artists in major U.S. museum collections are Hispanic or Latinx.

There are also many mid- and late-career Chicano artists who should have had solo shows and retrospectives by now, she said, noting that The Cheech’s first major retrospective, slated for 2024, will be dedicated to artist Judithe Hernández .

“We show this work every day. We don’t shoot it every five years,” Fernández said.

Marin, who fell asleep to the scent of citrus groves in the San Fernando Valley as a young child, seems to have been drawn to the Inland Empire. He hopes to convert some of the historic citrus-packing houses in the area into art studios, and hints at starting a second museum, this one dedicated to the lowrider (car culture reigns supreme in the Inland Empire), which Marin sees as uniquely Chicano cultural product.

“Riverside has a real opportunity to become one of the most important arts centers in the United States and maybe even the world,” said Marin.

As a Riverside native, my head spins when I hear all this. After all, this is the part of California that Joan Didion famously berated as cultureless hillbilly, where the local historical society celebrates the owners of the orange groves and not the people like my parents who harvested the fruit. And where Chicano culture has existed for generations, but never in our museums.

During our tour, installation was still ongoing for the center’s two inaugural exhibitions, a survey exhibition entitled “Cheech Collects” and the temporary inaugural exhibition “Collidoscope”, a retrospective by artist brothers Einar and Jamex de la Torre, produced in collaboration with the new Smithsonian’s National Museum of the American Latino.

The Cheech’s showpiece is the 26-foot-tall lens-shaped installation in the lobby, commissioned by the de la Torre brothers. Using lenticular printing technology that converts 2-D prints into stereoscopic images, the piece projects an animated image of the burly Aztec earth goddess Coatlicue, who transforms into a transformer-like machine composed of lowrider Chevy impalas. From a distance it appears like moving stained glass.

“Just when you think you’ve got a beat, you go a little bit to the left and it changes. It’s remarkable,” said Marin, pointing to one of the many Easter eggs lurking in the display boards — a map of the Inland Empire extending from East Los Angeles (a reference to Marin’s 1987 film Born in East LA). East stretches the windmill farms of the Coachella desert.

Patricia Escárcega is a journalist based in Los Angeles.