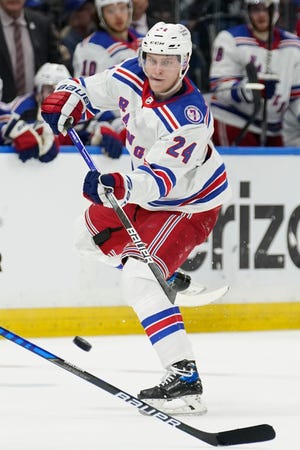 TAMPA BAY — There has been an ongoing debate in the coach’s office, where Gerard Gallant and his staff are struggling to figure out how best to lead the New York Rangers through another elimination game.

Should they keep things as they are to show their team there is no panic? Or make changes to give them a much-needed jolt?

“It’s a fine line,” Gallant said after Saturday morning’s skating session at the Amalie Arena. “Obviously we’ve talked about maybe some cast changes and see how it goes. But we’ve been doing that all season, so it’s not a big deal.”

No big deal — except when you consider that those decisions could mean the difference between ending that memorable run or advancing that Eastern Conference Finals in Game 7.

MATCH 5: Rangers are on the verge of being eliminated after their third loss in a row

But regardless of which direction Gallant takes for Game 6 against the Tampa Bay Lightning, which begins just after 8 p.m. Saturday, his team feels no change in his demeanor.

“He’s relaxed,” said forward Tyler Motte. “He knows how to focus the group. Obviously he expects a lot from us. It’s all things we can control – our work ethic, our attitude – and it gives the guys the confidence to just play the game. If we’re careful of some of these simple things that we can control, he lets us play our game.”

Gallant made a minor change for Game 5, reinstating Kevin Rooney in favor of playoff-first scratched veteran Ryan Reaves to speed up the lineup. But it seems something more significant is brewing for this win-or-go Home Match 6.

Interestingly, Kaapo Kakko was one of the last players to leave the Amalie Arena on Saturday morning. The expected scratches usually stay away for extra work, including the 21-year-old striker.

He was limited to just 10:33 on hold on Thursday as Gallant has oddly scaled back its use of the kid line – which also includes Alexis Lafrenière and Filip Chytil – in recent games. Kakko was the least consistent trio with five points (two goals and three assists) in 19 playoff games and appears a candidate for a surprise scratch in Game 6.

What else could Gallant have up his sleeve?

Bringing Artemi Panarin to the top is a consideration.

The dynamic winger found it difficult to maneuver at his typical speed in the postseason with just seven consistently strong points in 19 games. But the 30-year-old was one of the most noticeable players on the ice in Game 5, as he recorded four chances (two big threats) on five shot attempts (three on goal) as a team strength while tacking three takeaways and two rebounds, according to Natural Stat Trick.

He looked a lot better than usual – and Rangers could definitely use this Saturday.

“He feels it every night,” Andrew Copp said of Panarin. “When the puck is on his racquet something special can definitely happen. Obviously those playoff games were very tight controls, (but) you still see his ability to make plays and create space for himself and his linemates. I don’t think there’s a day I’ll go, ‘Bread doesn’t feel today.’ He’s gifted and he knows he is. He has been a huge part of our success so far and will continue to be.”

If Gallant decides against it and keeps Panarin in his usual place with Copp and Ryan Strome, another option to keep an eye on is bringing either Chytil or Lafrenière up front to play with Chris Kreider and Mika Zibanejad. He’s used both there at times this season, with Chytil playing with them for a stint in the second round against the Carolina Hurricanes.

The current top flight of Kreider, Zibanejad and Frank Vatrano have created just seven high-risk chances in their first five games of the series, with Lightning coach Jon Cooper drawing level with his defensively-focused trio of Anthony Cirelli, Brandon Hagel and Alex Killorn.

“As a line we talked a lot about finding our game,” said Zibanejad on Friday. “Ultimately we have to be better five against five. We have to be able to create more chances. That was kind of the theme of everything we talked about. If we speak for our line, we’ve been here before.” . Even in the Carolina series, we didn’t get a lot of five-on-fives against the (Jordan) Staal line. But it’s a new game (Saturday). It’s a new opportunity.

The Cirelli line could get even tougher if Steven Stamko replaces Hagel, which would likely be the case if center No. 1 Brayden Point returns from his lower body injury. He hasn’t played since May 14, but Cooper has left the door open for Game 6.

However, it’s worth noting that Point stayed on the ice longer than most Tampa players Saturday morning, which is usually a sign of a player getting scratched.

“When he’s healthy, he’s a big part of their group,” Gallant said. “In my opinion, he could arguably be their best all-around player. He plays a great game of two way hockey and is a great player. But he must be healthy. That makes a big difference. He hasn’t played in about a month. … So we’ll see if he plays tonight. We can not do anything about it. We have to take care of our game.

For Rangers, that means finding ways to cause offense.

It would help to get more powerplay opportunities – they’ve only had three together in the last two games – but they need to improve on even strength where they’ve netted just once in the last three competitions.

Whether or not a few strategic adjustments to the lineup will help this matter is a decision Gallant can wrestle with until warm-up. But players are responsible for ensuring that any changes made work.

“Either way, it’s an elimination game,” said Copp. “I don’t think we need to worry about that. I’ve been on both sides where there’s been a lot of consistency and that can be nice. It allows the line to work its way out somehow when you’re not playing that well. But I’ve also been part of a line change in every period or game and that can immediately create sparks and stuff like that. I think what matters is how we play tonight. I don’t know I don’t think the line combinations or anything like that will make the difference. It’s just a matter of our mentality and our desperation and how well we play.”

NOTE: This listing is subject to change

Vincent Z. Mercogliano is the New York Rangers batting reporter for the USA TODAY Network. Read more about his work at lohud.com/sports/rangers/ and follow him on Twitter @vzmercogliano.