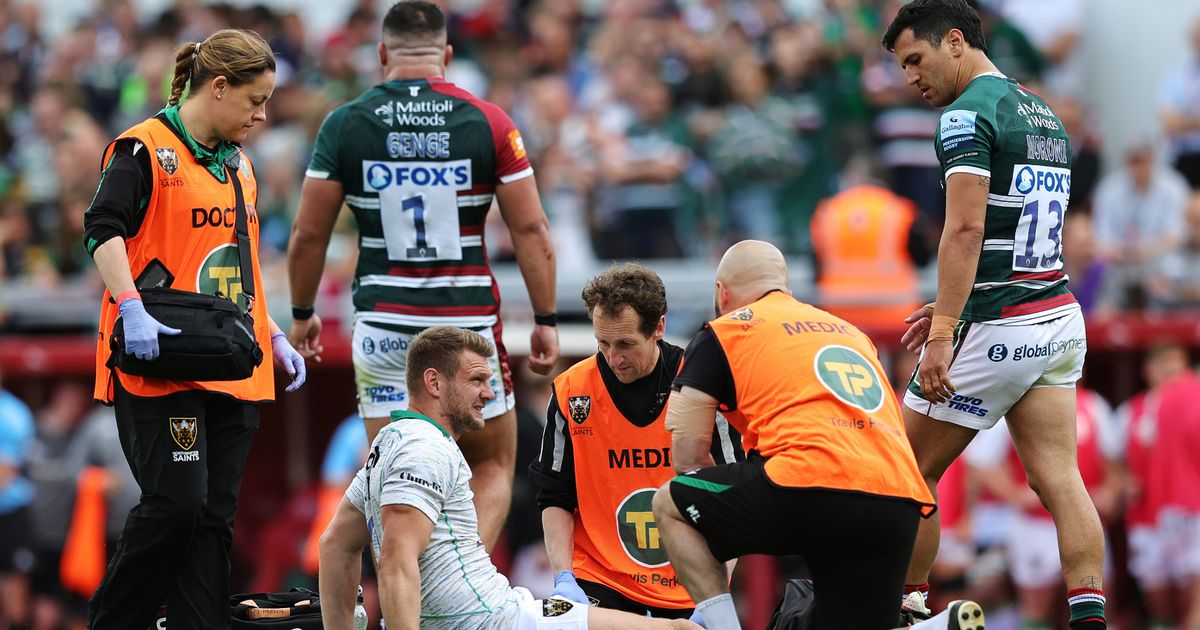 These are your rugby headlines on Sunday 12th June morning

Pivac sweats on Biggar as he is forced

Wales must eagerly await skipper Dan Biggar’s fitness after he was sent off injured in Northampton’s 27-14 Gallagher Premiership semi-final defeat by Leicester at Welford Road.

The 100-cap fly-half seemed to hurt his back trying to charge down in the first half, pulling himself up uncomfortably. He continued playing but had to call it a day after 51 minutes.

Biggar had two penalties before the break and was then involved in a try by full-back Tommy Freeman. It was unclear whether the back spasm or a knee problem was the reason for his departure from the field and Wales boss Wayne Pivac will await the official diagnosis from the medics.

The Wales players soon reunite for their three Test tour to South Africa, with Biggar selected to lead the team ahead of Alun Wyn Jones.

Biggar is one of three fly halves named, the others being Rhys Patchell and Gareth Anscombe. Patchell limped out of the Scarlets’ last game against Stormers with a hamstring injury shortly after coming on as a substitute, while Anscombe is yet to recover at Test level following his own knee problems

Winger Alex Cuthbert was another scare after missing the Ospreys’ crucial last game of their United Rugby Championship campaign at home against the Bulls with a hamstring problem, although his coach Toby Booth called it “a slight wobble”.

Cuthbert is one of several players from the 33-man Wales tour squad to end the season through injury including Patchell, Josh Adams, Wyn Jones, Tomos Williams, Ryan Elias and Will Rowlands.

The first friendly against South Africa takes place at Loftus Versfeld in Pretoria on Saturday 2 July, with further games to follow in Bloemfontein and Cape Town.

In Biggar’s absence, leaders Leicester took over from Northampton and met Saracens in the Premiership final at Twickenham next Saturday. Sarries defeated reigning champions Harlequins 34–17 in the first semi-final, with Wales internationals Nick Tompkins and Aled Davies crossing for tries.

Former Springboks skipper Bobby Skinstad believes Welsh players could benefit from playing rugby in South Africa for a time. The ex-back row, who himself went in the opposite direction by spending a season with the Dragons, thinks such new experiences can be very beneficial.

“If Wales have five good outside halves but only four teams, they could give one of those players to a South African franchise. Wales benefits and someone gets to go to Cape Town. The player advantages, the team advantages and the national union advantages,” he said.

Skinstad believes that the fact that the two countries are now in the same domestic competition – the United Rugby Championship – offers a real opportunity on that front.

“I really think it fixes the situation where players are lost sight of. When a Welshman goes to Japan, nobody sees him. Now he can play in a different part of the world, but the same tournament. It must work. It makes sense. I know common sense isn’t that common, but we have to look at it and say it’s better for the player and better for the teams,” he said.

Skinstad, 42, has also responded to comments from former Wales and Lions captain Sam Warburton, who said the URC made no sense and “looks like a random mix of clubs”.

“Sometimes things have to look random for a while before they’re fixed,” he said. “I have no doubt that the format of the URC will start to put more pressure on the domestic leagues in Europe. I think this league will be the best place to play rugby.”

Duane Vermeulen will miss Springboks’ games against Wales with a knee injury, it has been reported in South Africa.

The absence of the veteran world champion was one of the headlines as the squad was named over the weekend, while the Bulls and Stormers simultaneously set up a South African-dominated United Rugby Championship play-off final.

However, it has since emerged that Vermeulen, who often has blockbusting games against Wales, is injured.

His No. 8 place in the Tests goes to either Kwagga Smith at No. 8 or exciting youngsters Elrigh Louw and Evan Roos. Jasper Wiese is another option.

There was a minute’s applause before kick-off against Northampton at Welford Road in memory of Tiffany Youngs following the tragic news about her earlier in the week. Her husband Tom retired in April after a career in which he captained the Tigers and made more than 200 first-team appearances.

Ford scored 22 points from a try, a conversion, a drop goal and four penalties, and he managed a second-half touchdown for Freddie Steward in his last home appearance at Leicester before joining Sale later that summer.

“Some things are bigger than rugby and what the Youngs went through no one can imagine to be honest,” Ford told BT Sport.

“This effort today by everyone here at Welford Road was for the Youngs family.”

May be back and ready to sizzle

Jonny May is entering the final phase of his career and is determined to enjoy every moment after a period of recovery from a knee injury whetted his appetite for the game.

May missed England’s Six Nations game with a meniscus tear originally caused by a kick to the back of the leg of Gloucester team-mate Ruan Ackermann in early January.

Four months later, the electric 32-year-old winger is hoping to re-enter Eddie Jones’ plans in time for Sunday’s game against the Barbarians and subsequent tour to Australia.

“I’m probably in the last quarter of my career now and the goal is to leave no stone unturned, keep exploring, stay curious and try to enjoy myself a little bit more,” May said.

“When you’re injured you realize sometimes you’re sorry for playing 80 minutes every week because it’s tough. Be happier, enjoy and tear yourself in and do the best I can.

“There are always bright spots and opportunities when you’re hurting to reconsider, reevaluate, take a break and then be grateful again.

“The bottom line is I’m as hungry as ever and desperate to just be a student of the game, constantly looking for ways and small tweaks to get better. Just being a happier person and a better rugby player.”