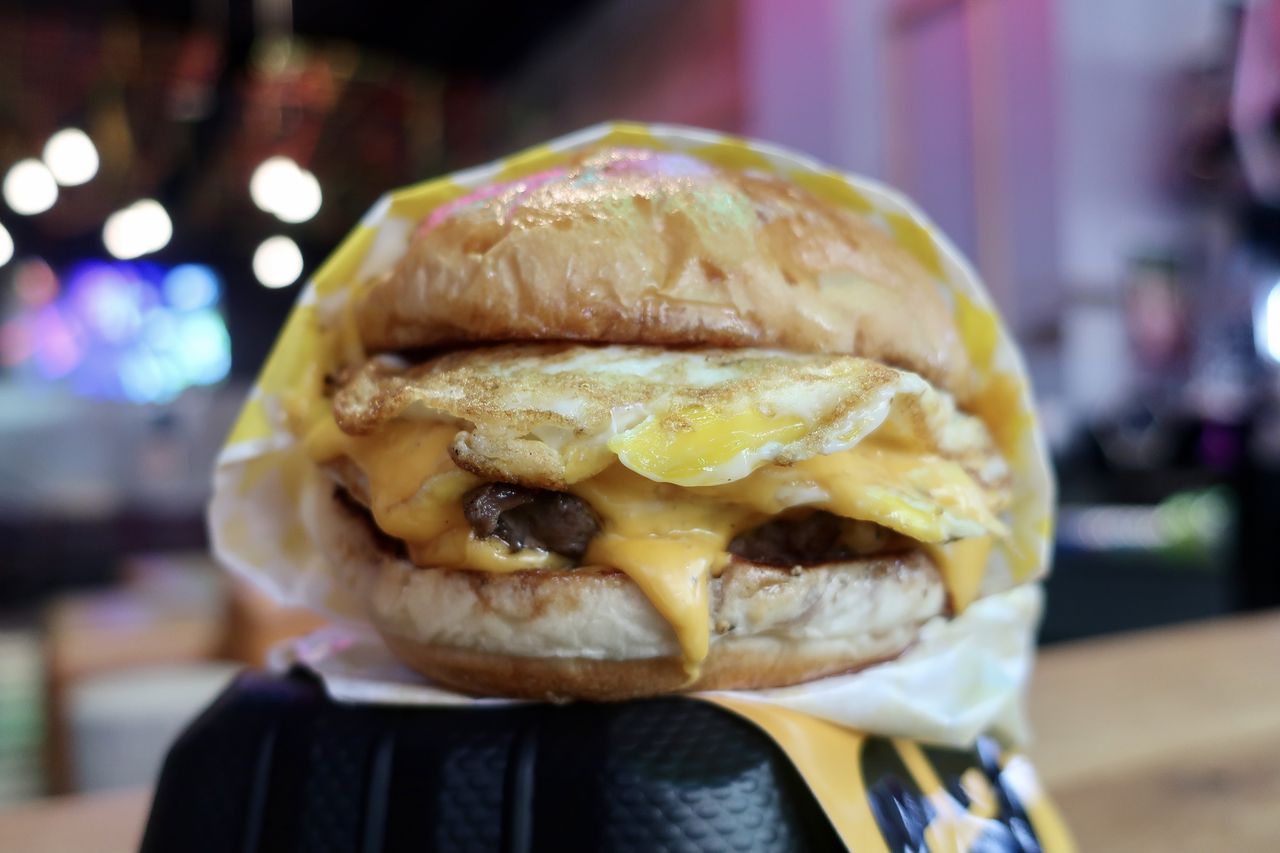 Notorious BIG, the late Brooklyn rapper, was as fond of high-low contrasts as he was of a hip Portland chef. Take “Big Poppa,” a song full of boasts, sexual or otherwise, including mansions, fancy cars, and a mid-date meal featuring “T-bone steak, cheese eggs, and Welch grape.”

This famous line, in signature Biggie Smalls style, is the inspiration for a sandwich at Big E (get it?), Twin Cities chef Justin Sutherland’s new micro-restaurant, located in the rec room-style lobby at downtown’s new 197 Portland Located -Rooms Moxy Hotel. Big E joins Fast Feathers, a new wing concept by Anthony and Stephanie Brown of Nacheaux in Northeast Portland, and an as yet unoccupied third micro-restaurant space in the hotel’s new Food Cart Alley.

As Eater PDX noted ahead of the Big E opening Tuesday, Sutherland is best known outside of Minneapolis for his television appearances, including a win on Iron Chef America, a run on season 16 of Top Chef, and hosting -Gig on “Taste the Culture” food and travel show highlighting BIPOC-owned restaurants. In his hometown of St. Paul, Sutherland, who has African-American, Japanese, and Norwegian heritage, owns Southern restaurant and bourbon bar Handsome Hog, home of a slow-cured and stir-fried whole pig’s head, and works with another chef the popular one Reopening Craft Beer Bar Happy Gnome.

Now called The Gnome, this beer garden, with its melted raclette and bone marrow pies, actually feels like it might one day fit in well with Portland. For now, Sutherland is focused on opening more “portable” counter service places like Big E, which already has second and third locations at the Moxy hotels in Minneapolis Uptown and Downtown, and a steakhouse, Noyes & Cutler, due to open next week St. Paul to be opened. Sutherland is an aspiring chef — future Big E locations could come to Oakland and (possibly) Cincinnati or the East Side of Portland. Just a few days later, celebrity chef Marcus Samuelsson stopped by the Portland restaurant.

“Big E is a project that the team has been working on for about two years,” said Sutherland, still settled at home after seven weeks of traveling. “The first location should be the Uptown Moxy Hotel in Minneapolis. I just went through this process, kitchen redraws, collaboration with the city. Portland was always on schedule. But first the room was ready and we didn’t want to wait any longer.”

As with Portland’s own Fried Egg I’m In Love, there are sandwiches at Big E with eggs of various shapes and names inspired by pop songs like LCD Soundsystem (the Dance Yourself Clean Sandwich, a simple bacon, egg, and cheese), The Flaming Lips (her name is Yoshimi, with scrambled eggs, lump crab, and pickled radish) and Tupac (the California Love, with egg whites, mashed avocado, spinach, and alfalfa sprouts). Most sandwiches come on fluffy milk buns from Beaverton’s Oyatsupan Bakery. Many have cheese from Tillamook, a longtime Sutherland supporter, and sauces from Minneapolis-based Cry Baby Craig’s.

For years, the hip-hop world had debated whether Notorious BIG was rapping about Welch’s grape juice, jelly, or even soda (it was juice served in carafes at a North Carolina pancake house, a friend revealed in 2016). In It Was All a Dream, named after another Biggie song inspired by the same lyrics, Sutherland puts a base layer of grape jelly on a fried steak, fried egg, and melted American cheese sandwich, giving it a sweetness roughly equivalent to ketchup (but without the vinegar bite) to an otherwise decadent sandwich.