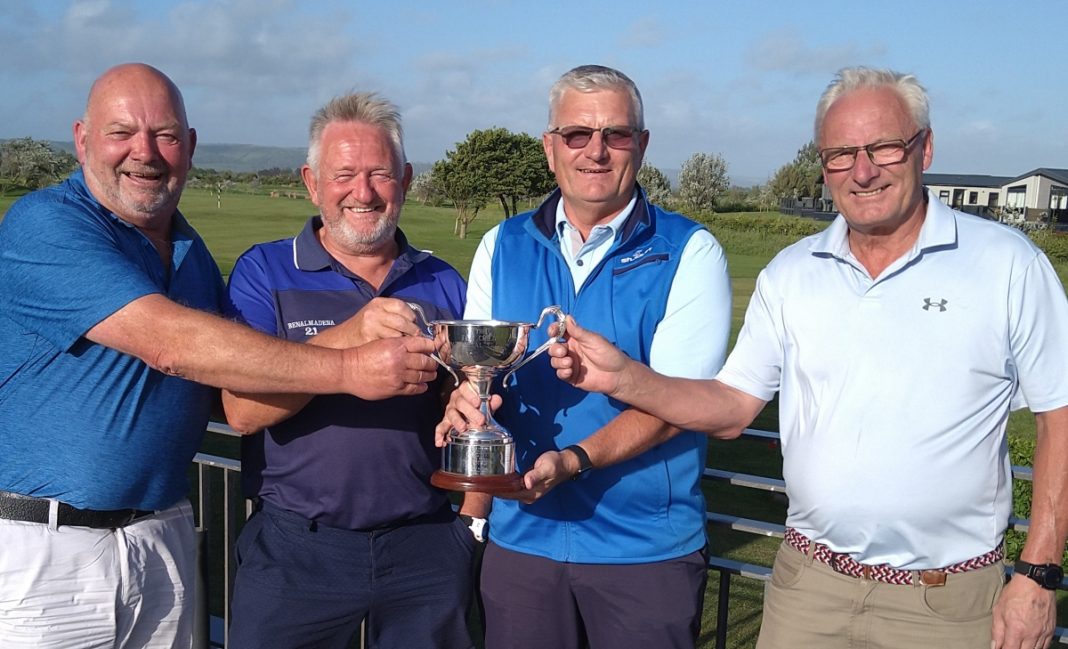 The benefit event, now in its 30th year, proved to be a successful day for this year’s two charities – the Injured Jockeys Fund and St Margaret’s Hospice.

The event is the longest-running fundraiser for the Injured Jockeys Fund and a spokesman said they owe a debt of gratitude to the House family for their ongoing year of support. St Margaret’s Hospice has also been a supporter for a number of years and said it greatly appreciates the donations raised by golfers. The 18-hole course has received praise for its excellent condition, which is overseen by Head Greenkeeper Max Smith and his team.

Andrew March, Brean’s Director of Golf, said: “It was a blustery but luckily dry day for the 19 teams as luckily a heavy shower just missed the course in the afternoon.”

“However, the constant wind made scoring difficult and a score of just 81 points was enough to secure Tom’s Boys the Tom Childs Memorial Trophy for the second time, 23 years after they won it the first time.” “Chris Fairchild, Matt Haskins and Steve Mason were joined by Steve Bateman to compile the winning score, which was the only one to surpass 80 points on the day.”

“Three teams all submitted 79 points, requiring a back nine countback to determine the finishing positions of 2nd, 3rd and 4th teams. It was the Brean Golf Club team who took second place alongside their designated Captain Gordy Wheelaghan, Dan Harper and Steve Jones, led by Club Captain Pete Barton.” Tony Roper, a regular supporter of the event, was joined by his son Gareth and David Benjafield, with Worlebury PGA Club pro Roy Baker completing the team.

Adds Andrew, “The final prize was won by another team with local knowledge as the Brean Seniors were 5th out of 78. Senior captain John Cranley was joined by Tony Richards, John Ham and Barrie Tucker as they ousted the Heineken quartet in a Countback Who brought BBC Radio Bristol’s Geoff Twentyman to their ranks.”

“Many tales of woe from the strong winds were told after the round at Brean Country Club as all players enjoyed an excellent post-round meal before prizes were pre-selected.” This was conducted by Andrew March, who organized the event and enlisted the help of National Hunt Racing legend John Francome to present the awards.

“Everyone enjoyed their day, whether they won or not, and many were already planning a return visit in 12 months to try again for the trophy.”

“The day ended with an auction conducted with great humor by Bob Nicholson, one of the founding organizers of the event, and this swelled the charity’s coffers and helped the final amount raised to exceed £4,000.”