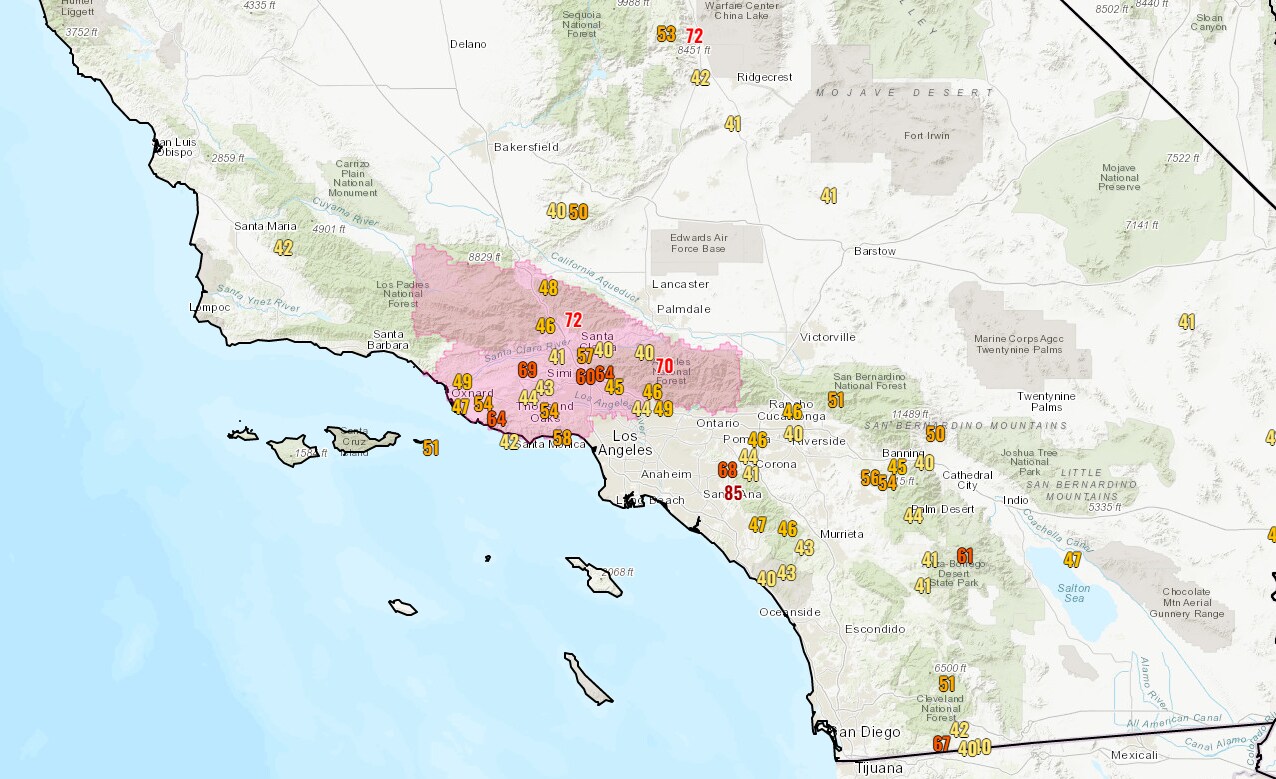 Wildfire risk has returned to Southern California with the arrival of the strongest Santa Ana wind event of the season. Just a week ago, a powerful winter storm dropped several inches of rain on the region, part of a cold and wet pattern that seemed sure to end the fire season. But the sky cleared quickly and the weather changed in no time.

“Whether [a] a fire occurs, there could be a rapid spread of wildfires resulting in a threat to life and property,” they wrote.

While last week’s rains should help limit the spread of fires, the strength of the winds, combined with extremely dry air, has forecasters worried.

Maximum gusts ranging from 60 to 75 miles per hour are expected on Wednesday, with isolated gusts up to 95 mph in very high ground. Early Wednesday morning, a wind sensor along Magic Mountain Truck Trail, 23 miles north of Los Angeles at an elevation of over 4,500 feet, recorded a 102 mph gust.

Rich Thompson, a fire meteorologist with the National Weather Service in Los Angeles, said in a Tweeter that this week’s Santa Ana winds are dangerous, despite recent rains.

“This time of year, my mantra ‘the wind trumps all’ still holds true,” he wrote, referring to the danger of wildfire. “Be ready.”

Winds are blowing ‘offshore’ from the north and northeast as a strong center of high pressure over Nevada and Utah sends air rushing to lower pressure off the coast Californian. The surface pressure difference between Los Angeles and Daggett, a city about 100 miles to the northeast, is used to estimate potential wind strength. This difference is expected to be “well above the 97th percentile for this time of year and would be one of the strongest offshore gradients we have seen in some time,” the Los Angeles Weather Service wrote.

A red flag warning for high fire danger is in effect for Ventura County and western parts of Los Angeles County until 7 p.m. Wednesday.

“This whole area is very windy — they should see pretty strong winds through Wednesday,” said Ryan Kittell, a meteorologist with the National Weather Service in Los Angeles.

This region also received less rain from the recent storm — less than an inch for much of Ventura County — and generally missed the storms this fall that drenched other parts of Southern California.

“Usually 5 inches everywhere is a starting point for fire season killer rain,” Kittell said. “We’re close to that in some areas, but not quite.”

More weather and more rain are needed to lessen the danger of fires in winter, he said.

“Plants that are still alive – they really haven’t had a lot of time to absorb moisture from the soil,” he said. Meanwhile, leaves and other dead plant debris on the ground are drying out rapidly from last week’s storm.

This trend will continue with another event in Santa Ana scheduled for this weekend.

To the south and east of Los Angeles County, recent torrential rains have significantly reduced the risk of fires, especially in mountainous interior regions. However, the landscape is still not as green as it would be later in the winter, and coastal parts of San Diego and Orange counties still face a “high” fire weather threat. Wednesday.

“We have the potential for fire growth if there are ignitions in the right hotspot,” said Alex Tardy, warning coordination meteorologist for the San Diego office of the National Weather Service. “We have another Santa Ana following this weekend, so we have to take into account the significant fuel drying that will occur after Wednesday.

La Niña typically brings long breaks between storms for Southern California, as well as an amplified jet stream that can bring windy weather like this week’s, he said. With the main winter months expected to be drier than normal, there could be a risk of forest fires during the cold season.

“We’re not out of fire season, although last week’s event was much wetter than most November storms and was widespread,” Tardy said.