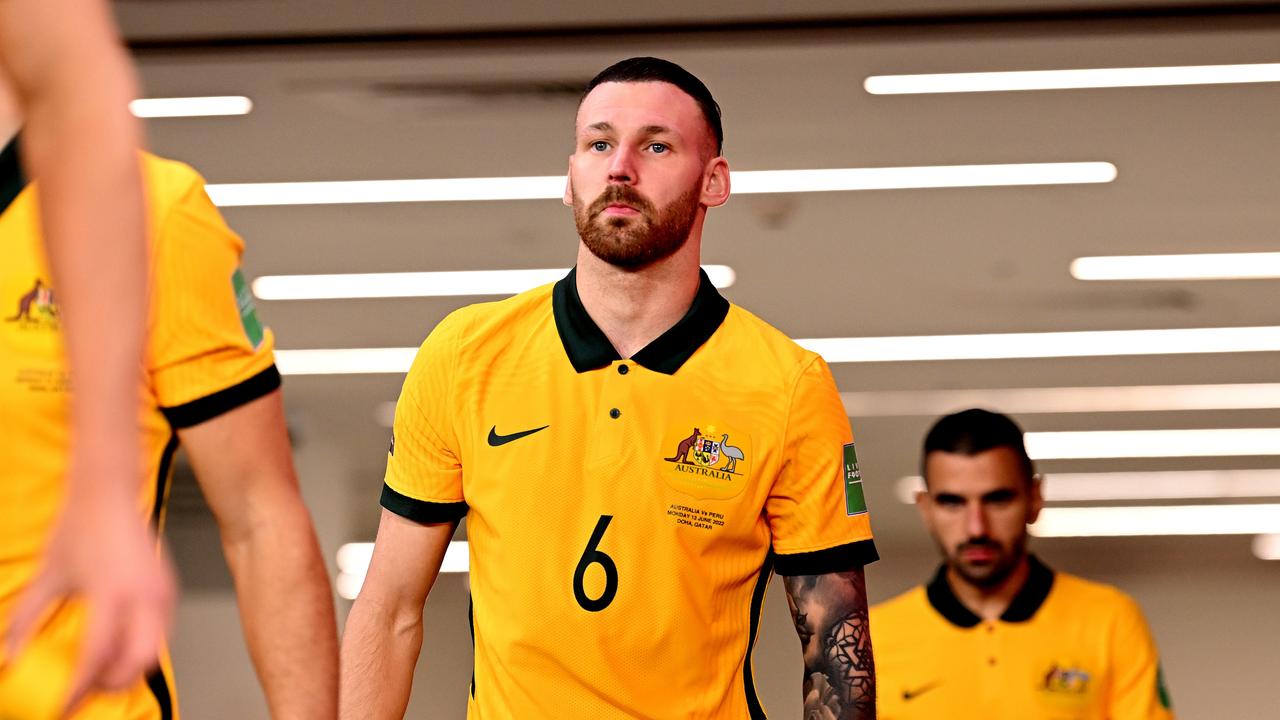 Socceroos winger Martin Boyle has been relegated to new club Al-Faisaly on the final day of the Saudi Professional League season, just 13 games after a big-money move from Scotland.

It leaves his transfer future in doubt – the same goes for Tom Rogic, who is still without a new club following his departure from Celtic.

Meanwhile, there are updates on the status of other Aussies abroad, including many big – and surprising – moves.

Leaving his native country to play in the conceded Middle East was a difficult decision for Scottish-born winger Martin Boyle – but he says he made it to secure his family’s future.

But just five months after leaving Hibernian for Saudi club Al-Faisaly, the stars Socceroo’s side were heartbreakingly relegated from Saudi Arabia’s top flight this morning.

To add insult to injury, Al-Faisaly had to send his goalkeeper off 10 minutes into injury time as the game descended into chaos.

Despite the club’s relegation, there is good news for Boyle, who played a key role as Al-Faisaly made a sensational debut in the Asian Champions League and emerged first from the group stage. Boyle scored once in his six group stage games and added an assist.

SStream 50+ sports live and on-demand with Kayo. New to Kayo? Try it now for 14 days for free >

The round of 16 will not take place until February next year but it remains to be seen whether Al-Faisaly will attempt to cut costs given being relegated to the second division – with Boyle one of the highest-earning clubs.

His former club Hibernian reportedly have a buyback clause in his contract, giving you the option to fulfill any transfer offer for Boyle from an English club.

Boyle’s form in Scotland – 14 goals in 28 appearances in all competitions in the first half of this season before his move – could see Hibernian and other clubs looking for a cheap deal, while Boyle himself is looking for a better level of competition at the World Cup.

Arguably Socceroos’ most consistent forward since his debut in late 2018, he has contributed five goals and six assists in 17 games.

A month after leaving Celtic, Tom Rogic seems no closer to finding a new club.

Rogic, still just 29, left a legend at the club with 16 trophies including seven Scottish league titles. The playmaker has scored 46 goals and added 49 assists in 273 appearances for the Hoops.

But according to manager Ange Postecoglou, the Socceroos star felt the time was right for a new challenge.

It’s puzzling, however, that he hasn’t found a club yet, despite reports that a big money offer from Indonesia’s Persija Jakarta was turned down overnight.

Several A-League clubs are reportedly interested in bringing him back Down Under. But at 29 – and having enjoyed a successful season with Celtic – Rogic could be looking to stay in Europe or cash in on what is likely to be the last big-money long-term deal of his career.

With the World Cup less than six months away, his next move could be crucial to his Socceroos hopes.

On Wednesday, a statement from the club named Luongo as one of three players to leave the club at the end of their current contracts and have ‘declined new contract offers’. But Luongo took to social media to reply: “Did I?” in a dubious reply.

A statement from the Owls read: “Nathaniel Mendez-Laing, Massimo Luongo and Joe Wildsmith have turned down new contract offers and will leave Hillsborough at the end of June…

“Luongo signed for Wednesday in the summer of 2019 and has played 73 games… The Owls would like to thank all three players for their services and wish them all the best in the future.”

Soon, the Australian wrote on his Instagram: “Did I? Oh okay…” next to an emoji with a confused questioning expression and a shrug emoji.

The 29-year-old has provided five assists and one goal in 30 appearances this season.

He has not played for the Socceroos since January 2019 as he has been repeatedly plagued by injuries since then.

Glover Dean Bouzanis has traveled the world in a wonderful journeyman career that began as a Liverpool junior. He has played in Australia, Greece and the Netherlands and several times in England.

Now he has climbed the ranks of the English football pyramid on a three-year deal to join Championship side Reading.

Bouzanis said: “I’m over the moon, it’s a huge football club and I’m delighted to be here. I can’t wait to get started.”

He becomes the fourth Australian gloveman to have played for the club, with former Socceroo Adam Federici being the most famous. Bouzanis said: “He’s someone that Australian goalkeepers look up to, he’s had an incredible career.”

Reading struggled for depth in the goalkeeping position last season, using four different glove players at times and ending the year with just one fit older goalkeeper – and nearly being relegated from League Two.

The club is managed by manager Paul Ince, a legendary English midfielder who has had a distinguished career playing for both Manchester United and Liverpool.

Bouzanis, 31, is the second goalkeeper signed from Ince this transfer window after Joe Lumley went on loan from Middlesbrough.

It’s an incredible reward for Bouzanis, who moved to England when partner and Matildas superstar Steph Catley signed for Arsenal in July 2020.

Bouzanis moved to National League (fifth tier) Sutton United, who won the competition in their debut season and were promoted to the EFL for the first time in their 123-year history.

Bouzanis enjoyed another strong season that year with Sutton in England’s fourth tier, finishing an impressive eighth place and playing for a trophy at Wembley. He leaves the club after 95 appearances with 39 clean sheets.

Bouzanis recently spent “a good four and a half weeks” back in Australia, having since been stuck in England due to Covid-19.

In the transfer news, left-back Jason Davidson has been rewarded for a sensational year at Melbourne Victory with a move to Belgian club Eupen, where he will play alongside fellow Australian Jimmy Jeggo. Davidson’s form in the A-League Mens also earned him his first Socceroos cap since 2015 and his Europe move should keep him in contention for a seat on the plane to Qatar in November.

Another left-back, 31-year-old Aziz Behich, is also set to change clubs, with the veteran set to leave Giresunspor when his contract expires in the coming days. He looks set to stay in Turkey’s Super Lig, with a move to rivals Alanyaspor likely.

Socceroos veteran Trent Sainsbury is reportedly close to signing for Qatari club Al Wakrah after leaving Belgium which should make him feel at home at the World Cup.