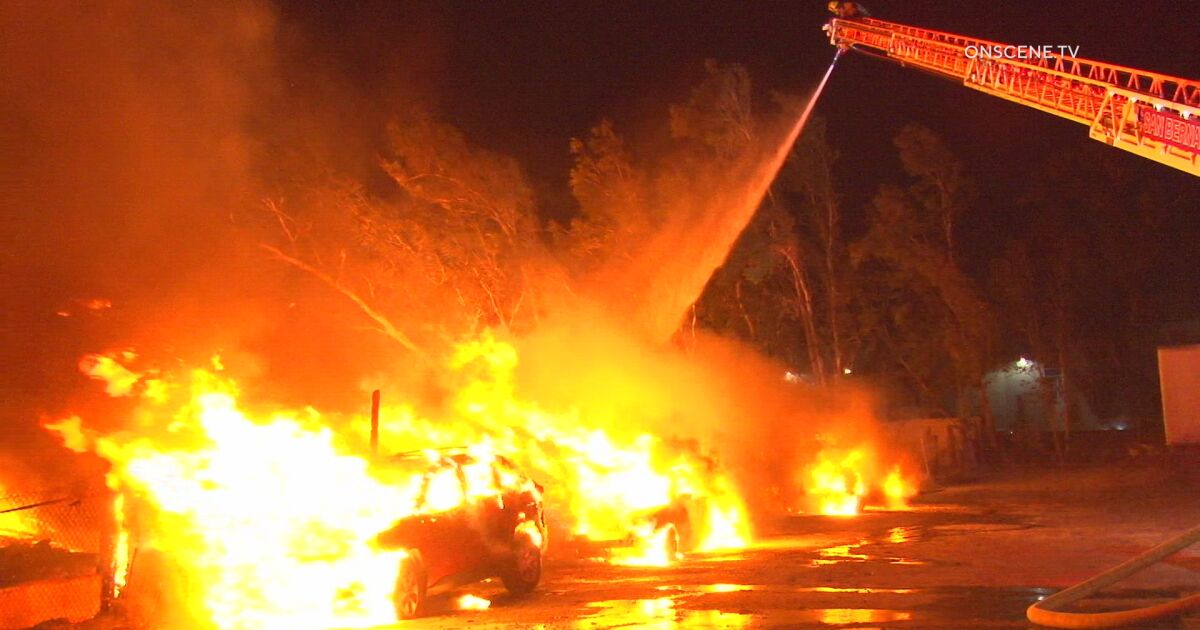 The strongest Santa Ana winds of the year continued to batter Los Angeles and Ventura counties on Wednesday, bringing threats of wildfires and wind damage, overturning semi-trucks and triggering a fire in a pallet park in Fontana.

Moderate winds began to develop Tuesday morning and reached gusts between 60 and 70 mph in some areas, according to the National Weather Service. Winds are expected to ease around noon Wednesday, but gusty conditions are expected to continue through Thursday morning.

The weather service issued a red flag warning for Los Angeles and Ventura counties until Wednesday afternoon due to strong winds and low humidity levels, which may pose an extreme fire hazard in the area. Humidity levels are expected to reach 8% to 15% between 7 a.m. and 7 p.m. Wednesday while maximum gusts are expected to reach 40 to 60 mph in the coasts and valleys and 55 to 75 mph in the mountains and foothills.

“If there is an ignition source, with these weather conditions, it can definitely take off,” he continued.

However, winds were found to be less intense than expected in parts of the south, with the NWS canceling high wind warnings in Ventura County, the San Fernando Valley and the Malibu area Wednesday afternoon.

The San Bernardino County Fire Department responded to a fire just before midnight Wednesday near Boyle and Catawba Avenues near Highway 10 in Fontana. Officials said the fire could have started in a truck or pallet park before spreading to nearby homes and cars.

The blaze was fueled by 50mph winds but was eventually extinguished, firefighters said.

The winds also blew a utility pole for a high voltage wire dangerously close to the roof of a strip mall and several homes in Sylmar, causing the mall to evacuate.

The only way out of the houses was under the utility pole, and residents were escorted by Los Angeles Fire Department personnel.

No injuries were reported.

At least five large rigs were knocked over Wednesday morning on Highways 210 and 15 in the Rancho Cucamonga area, causing all southbound lanes of Highway 15 to be temporarily closed.

Santa Anas, easterly winds that develop due to high pressure over the Great Basin, like the Nevada and Utah region, generally come from the northeast and pass over the mountain slopes in the Santa Anas region. Los Angeles, according to Wofford. As they pass over mountains, they tend to speed up and heat up, resulting in strong gusts in valleys and mountainous areas.

The strongest winds tend to be concentrated over the western San Fernando Valley and Santa Clarita Valley near the Highway 14 corridor and in Ventura County, Wofford said.

A tractor-trailer blown over by Santa Ana winds on Highway 201 in Rancho Cucamonga hangs over Day Creek Blvd.

Gusts of about 104 mph were recorded around 5 a.m. Wednesday at Magic Mountain Truck Trail in Santa Clarita, according to the weather service. Winds reached 82 mph at Palo Sola Truck Road and 81 mph at Browns Canyon.

Wofford recommended securing anything outside that could topple over or fly away, such as umbrellas, and take care when driving, especially through mountain passes.

“Winds like this are variable so they can be very light one minute and then all of a sudden you can put a 50mph gust through it,” he said. “Driving is a danger in these kinds of situations.”

Another event in Santa Ana is expected to arrive on Saturday and while not as strong as the current one, gusty winds coupled with low humidity could usher in similar conditions over the weekend.

“We could be in that situation again on Saturday,” added Wofford.