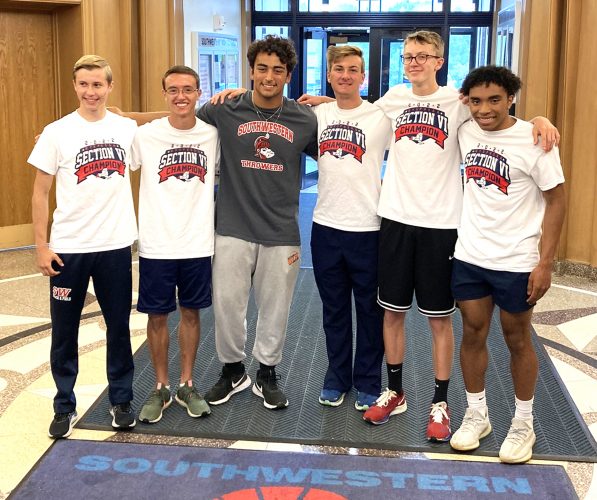 Jay Sirianni used the word during a 15- or 20-minute cell phone call earlier this week “impressive” on several occasions.

It’s been such a springtime for the boys’ track and field coach at Southwestern Central School.

There is no other word for it.

As a matter of fact, “impressive” might be too tame an adjective.

“We have never gone to a state meeting so often” said Sirianni.

He later added: “I see athletics as a team sport all year round, but now it’s going to be individual. I am happy for these children for what they have done. That’s on them. I’m only there for the ride.”

Shutters will compete in the 800m and lead the school’s record-breaking 3,200m relay, which also includes Lewis, Luce and Brown; Butterfield will run the 200 meters; and Hoose will throw the shot. All were first place winners in last weekend’s Section VI State Qualifiers.

“They all work extremely hard and are all really good student athletes,” said Sirianni.

These Trojans had plenty of company from the Chautauqua-Cattaraugus Athletic Association yesterday on the bus ride to central New York.

Other Section VI State Division 2 qualifiers among the boys include Falconer/Cassadaga Valley’s Devin Austin, who won two events last weekend – the high jump and triple jump – and finished second in the long jump, by a distance good enough to to advance him also to Cicero-North Syracuse; Randolph’s Roan Kelly (1,600 meters) and Clayton Crouse (pole vault); Clymer/Sherman/Panama Gerald Carris (pentathlon); Fredonia’s Ledreth Velez-Olmo (400 meters), who is also a member of the school’s 1,600 meter relay team that holds the record with Alex Field, Jayden Yerico and Matt Linder; and Jacob Brink of Allegany Limestone (1,600 meters).

State qualifiers among the area girls are Jenna Fisher of Clymer/Sherman/Panama in the 200 meter; Tyyetta Herman of Franklinville/Ellicottville over 400 meters; and Angelina Napoleon of Allegany-Limestone in the 800-meter and 2,000-meter steeplechase.

Fisher is seeded 17th in the 200 meters; Herman is ninth in the 400 meters; and Napoleon, the national high school steeplechase record holder, is seeded first in both of their events.


TOLEDO, Ohio — Eric Mack and Thomas Garrick each scored 17 points to propel Jamestown to a 90-86 win over…