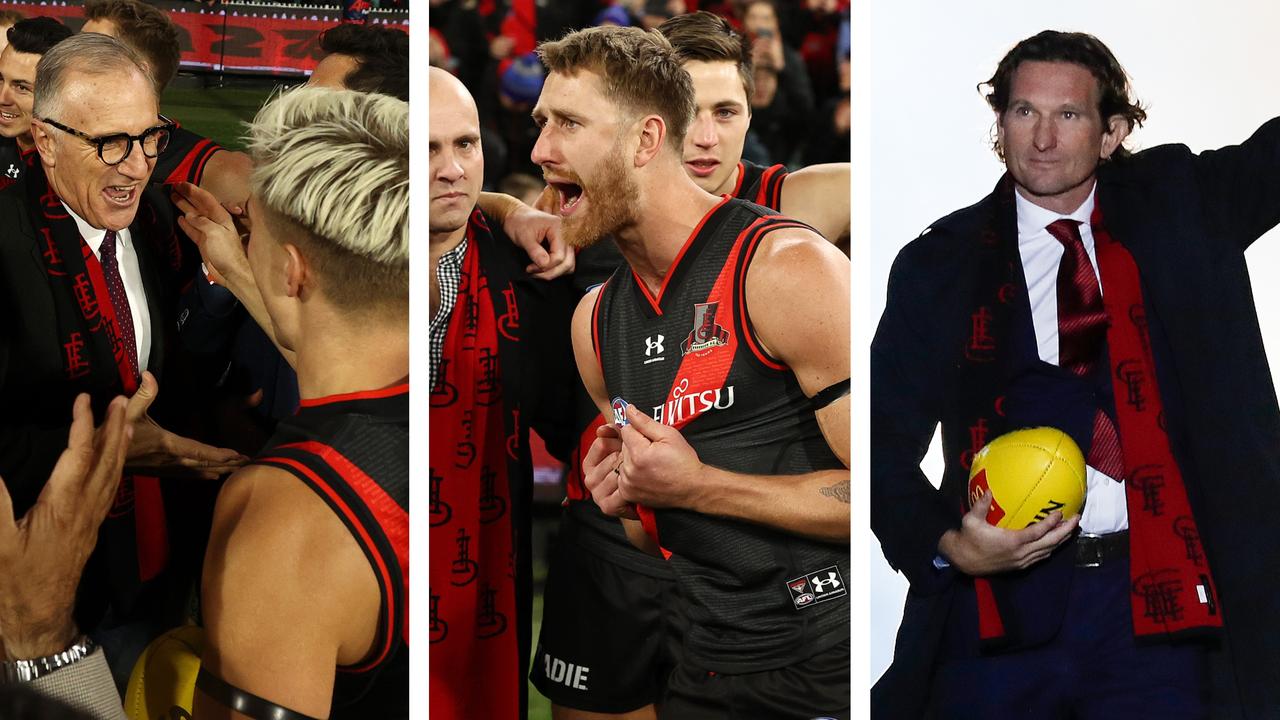 Essendon were praised for a stunning pre-match ceremony celebrating their 150th anniversary – and it culminated in skipper Dyson Heppell spearheading one of the most defining moments in the club’s history.

The Bombers celebrated their 150th birthday with a duel against one of their closest rivals at Carlton on Friday night.

And the racquet set the tone perfectly leading up to the first impact.

Stream every game of every round of the 2022 Toyota AFL Premiership season live and in-game commercial-free on Kayo. New to Kayo? Try it now for 14 days for free >

The ceremony, narrated by Senator Briggs from Windy Hill, the club’s spiritual home, began with a video highlights package celebrating the club’s history and all key moments along the way.

Attention then turned to MCG Live, where Briggs took up the story in the dark as the club’s 16 Premiership Cups were spread across the field.

Some of Essendon’s early AFLW players were featured first, including Maddy Prespakis, who signed the marquee. A few scattered boos were heard around the MCG – presumably blues fans disappointed that Prespakis, the best and fairest winner of AFLW 2020, had left their club to join the Bombers – but the girls didn’t care about it and laughed as they waved to the crowd.

Club legends Michael Long and Gavin Wanganeen, who won the Norm Smith Medal and Brownlow Medal respectively in the club’s Premiership year 1993, were then introduced to the fans, followed by Premiership heroes of 2000, Scott Lucas and Adam Ramanauskas .

Matthew Lloyd, Bombers’ all-time top scorer, was then introduced and, in typical Lloyd style, he picked up some MCG turf and tossed it in the air to check which way the wind was blowing – just as he did in front of everyone Set shot attempt during his did playing career.

Next up were the Watsons (Tim and Jobe) and the Fletchers (Ken and Dustin) – then all four Daniher brothers (Terry, Neale, Anthony and Chris). As the crowd roared, there was a lovely touch as the brothers helped Neale raise his arms in the air to greet the fans. In a few days, Neale will once again be a proud spectator at the MCG for the annual Big Freeze slide.

Then came the Main Event – and in true WWE Main Event style, James Hird made an appearance.

On a rare outing at an official Bombers event, Hird walked onto the MCG turf with a footy under his arm after going through a smoke screen. As he waved to the crowd, proudly holding his Bombers scarf in the air, there were expected boos – but the cheers seemed to outweigh the jeers.

“How good was the reception for James Hird when he walked out? Unbelievable,” three-time Prime Minister Lion Jonathan Brown told Fox Footy.

Hird’s trainer, Kevin Sheedy, walked down the aisles of the MCG grandstand to the ground.

And just as he did almost 29 years ago after his Bombers defeated West Coast at the same venue, Sheedy waved a piece of clothing amidst the fans – although this time it was a scarf, not his jacket.

At the final gate, the 23 Essendon players chosen to face the Blues took the field, ran past Pyros and through a special banner.

“How good is that? That was awesome. Well done to everyone involved,” Melbourne champion Garry Lyon told Fox Footy.

“If that doesn’t get you going, I don’t know what will.”

A minute later it was a heartwarming sight as the current players made their way to the Punt Road end of the MCG to greet and thank the club legends who had just been presented to the crowd.

Then came the spine-chilling moment as the modern players bonded with not only some of the biggest names in Essendon history, but in AFL history as well.

And with dozens of men arm in arm in a circle, Skipper Dyson Heppell stood up and addressed the group from the center of the circle.

Heppell grabbed his sweater and spoke with great passion. He was heard referring to the “Essendon Football Club fundamentals”.

“It’s a really big moment in the history of this club… It couldn’t be more significant,” said Lyon.

“Regardless of the result tonight, this will remain one of the scenes of the season.

“It’s something these Essendon boys will remember for the rest of their football lives.”

St Kilda legend Nick Riewoldt added: “This is as symbolic as it gets.”

Before the ceremony, each Essendon player received a surprise letter in their locker room from a former bomber who had worn the same sweater.