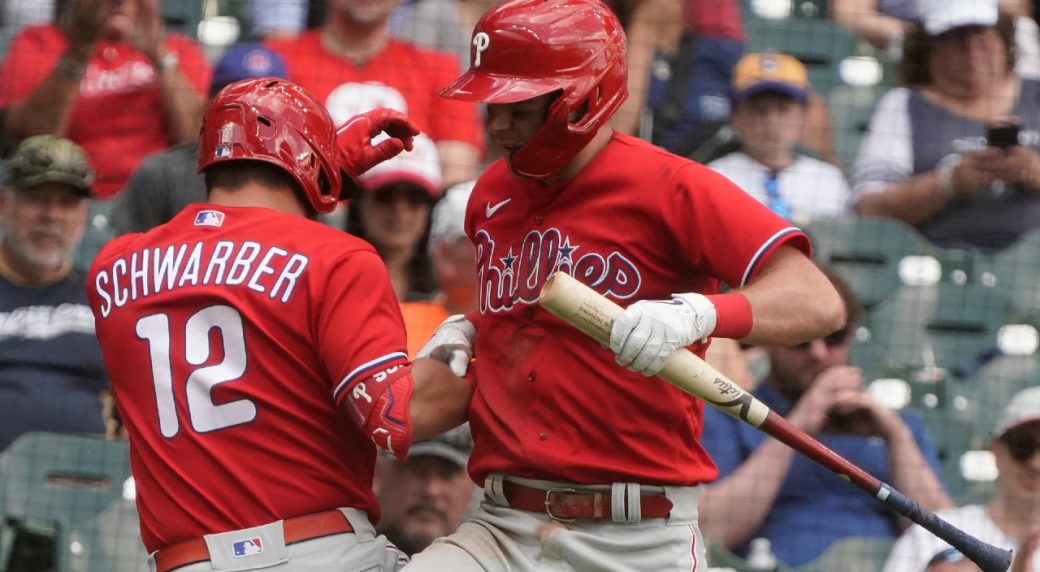 CHICAGO — Max Muncy opened the game with a three-run homer in the sixth inning after White Sox manager Tony La Russa ordered a deliberate walk to Trea Turner with a 1-2 count against left-hander Bennett Sousa.

Muncy had five RBIs on his return after missing 11 games with a left elbow sore. He entered and hit .150 to Turner’s .303.

Los Angeles trailed 4-0 before having six runs in fifth. Brusdar Graterol (2-2) won and Dylan Cease (4-3) was the loser.

MINNEAPOLIS — Gerrit Cole gave up home runs for his first three batters and a career high five in 2 1/3 innings, but New York rallied to beat Minnesota behind two home runs by Joey Gallo.

DJ LeMahieu hit the 100th home run of his career and the Yankees grabbed their 16th comeback win, tying Colorado and San Francisco for the major league lead.

Buxton has three two-homer games this season and six in his career, with a three-homer game in Toronto on August 27, 2017.

CINCINNATI — Josh Rojas hit a two-run single in the ninth for a four-run, 4-3 lead rally as the Diamondbacks won a four-game split.

Arizona went 3-1 down ninth but got help when Tony Santillan (0-1) threw a wild pitch and then threw away a bunt for an error.

Mark Melancon (2-6), the second of three assists for the Diamondbacks, clinched the win. Ian Kennedy threw ninth place for his fourth save despite allowing Matt Reynolds solo homer.

A foul ball in the fourth inning broke the right thumb of Reds catcher Tyler Stephenson, who is expected to be out for four to six weeks.

DENVER — Yonathan Daza looped a tied single into right field to cap a three-run fourth inning powered by three errors. San Francisco made a season-high four errors, including a pair in the fourth by second baseman Thairo Estrada.

Charlie Blackmon had three goals for the Rockies, who are 3-6 against the Giants this season.

Ji-Man Choi hit a two-run homer in the fourth before Miles Mikolas (4-4) who threw a three-hitter.

Jason Adam worked the ninth for his second save, ending a game that lasted 1 hour and 54 minutes as the Rays hit a season-high 11-game over .500.

MIAMI — Jazz Chisholm played in first place on Stephen Strasburg’s return after a year’s absence for a singles, stealing second place and Miami went on to win against Washington, who finished a three-game sweep.

Trevor Rogers (3-5) allowed two carries and six hits in five innings. Tanner Scott finished in a perfect ninth place for his third save.

Giménez blasted a single into left field ahead of Lou Trivino (1-5) as the Guardians slipped back above .500 for the first time since May 9. Guardians rookie Richie Palacios added a two-run single in eighth, and another run scored an Oakland throwing error.

Cleveland came from behind after Francona was ejected in the sixth inning for a 4-2 altercation with the Guardians.

Christian Bethancourt hit a two-run homer for the A’s.

Adam Duvall, Dansby Swanson and Travis d’Arnaud each rode one run for the Braves, whose winning streak is the longest since they won nine straight wins last August.

Fried (6-2) came out of a jam in the first and third before Jack Suwinski hit his eighth homer in the fourth. Fried worked about eight hits, batted eight and walked none. Kenley Jansen made his 16th save from 19 chances.

Santana hit a two-run homer to break a tie in the fifth inning as the Royals won straight games for the first time since May 17-18.

The Orioles sent nine batters on the plate in the fifth, chasing Kris Bubic and leveling the score.

Joel Payamps (2-1) worked his way out of a base-load jam to take the win with four relieved outs while Scott Barlow made his sixth save.