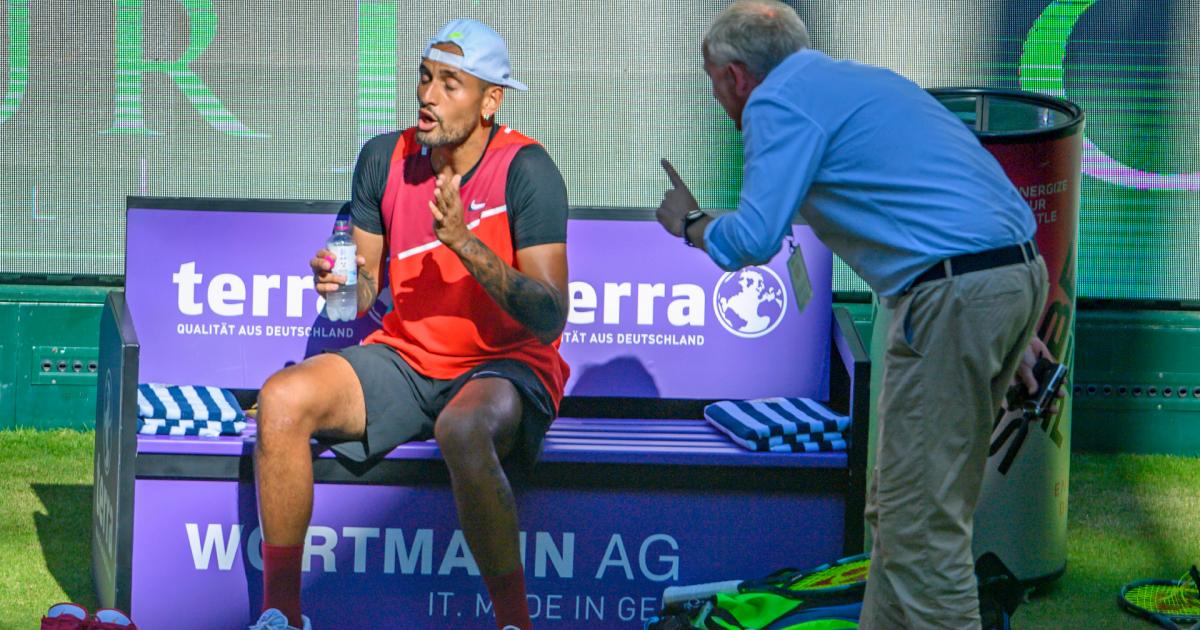 Nick Kyrgios put on a performance that had it all – incredible tennis, fights with officials, profanity, smashed racquets – as he defeated world No. 6 Stefanos Tsitsipas in the second round of the ATP Hall 500.

The Australian bounced back from a tight first set and plenty of emotional rollercoasters to win box-court tennis 5-7, 6-2, 6-4 in two hours and seven minutes during the warm-up tournament on grass at Wimbledon.

Kyrgios, ranked 65th, went into the match as a slight bookmaker favorite due to his superior skills on the pitch compared to the poor performances of Tsitsipas on the pitch in his career so far.

Tsitsipas, however, clinched a tight first set 7-5 behind a mega serve performance with the Greek winning 94 percent of his first serve points, including six aces.

Light up the lawns 🔥

Kyrgios boiled over in frustration when he was seen smashing his racquet against his courtside chair after losing the first set, with the chair umpire giving the Australian a code violation for his behaviour.

Come to tennis, stay because of the broken racket 🥴

An unusual souvenir from @Nick Kyrgios for this fan @ATPHallee! pic.twitter.com/egCvCOr3z7

Kyrgios managed to regain his focus to break Tsitsipas in the opening game of the second set, but the Australian struggled to contain his emotions soon after.

After being timed out by the chair umpire, Kyrgios temporarily refused to play during Tsitsipas’ service game and asked the tournament director to come onto the court while the Greek practiced serves in the background.

*Timeout warning Mr. Kyrgios*
the supervisor comes, Tsitsipas continues to serve, everything is so perfect pic.twitter.com/yJT79W3U9M

Despite an apparent meltdown, Kyrgios regained his focus and played brilliant tennis, including a ridiculous running forehand, to win the second set 6-2.

The Australian’s box office tennis continued in the third set with an incredible behind-the-body shot that sent the crowd wild before breaking Tsitsipas late to take the final set 6-4.

Kyrgios explained his feelings about the time penalty he received in the second set, believing the referee’s intervention was ‘unnecessary’.

“Referees, I don’t think they understand that… Everyone here in Halle was looking forward to seeing me and Stef play, they (referees) just want to be relevant,” he said.

“The match went well, the spectators enjoyed it – it was completely unnecessary.

“As you can see on the scoreboard, I concentrated pretty well. I lost the first set and then focused again and made it.”

The 27-year-old now meets sixth-placed Pablo Carreno-Busta in the quarter-finals, with the 30-year-old Spaniard having won just six games on grass in his entire career.