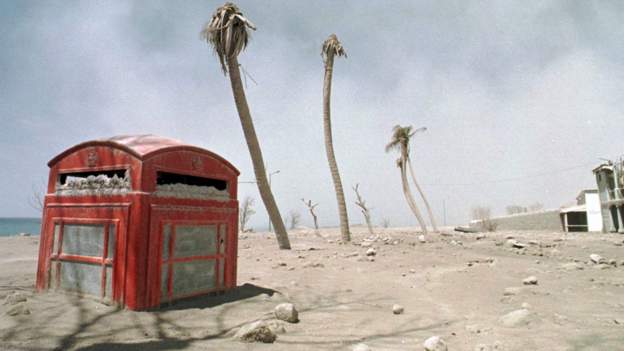 In July 1995, the Soufriere Hills volcano in Montserrat began erupting on a large scale. The effects were devastating.

Huge parts of the Caribbean island were covered with thick layers of ash. Sulfur dioxide fumes filled the air. The capital Plymouth had to be abandoned.

Large eruptions continued over the next five years, eventually leaving about two-thirds of the island uninhabitable. Two thirds of the 11,500 inhabitants fled.

A once tranquil and bucolic place would never be quite the same again – much of it remains sealed off in “restricted zones” and volcanic activity is still closely monitored.

Like Gibraltar or the Falkland Islands, Montserrat is one of 14 British Overseas Territories (BOT); self-governing but ultimately under British control.

After being forced to leave their homes, about 4,500 Montserratians settled in England, mostly near existing migrant communities in London and Birmingham.

Montserrat’s national consciousness remains marked by a cataclysmic catastrophe. But there is also a spirit of togetherness forged through trauma and struggle. You can see it in its national football team – and in the UK-based players who are giving back to their ancestral homeland.

Montserrat played its first game in 1991 and only became a FIFA member in 1996. For years they were among the worst national teams in the world.

Between 1991 and 2012 they won two games out of 27 played, both against Anguilla, another BOT currently ranked 210th in the Fifa World Ranking – only San Marino is lower.

When Montserrat were finally able to play home games for the first time since the eruptions in March 2004, it was in the first round of regional qualifiers for the 2006 World Cup. They lost 7-0 to Bermuda.

They’ve been minnows of the international game for a long time, but that’s slowly starting to change.

“It used to be shambolic,” says Alex Dyer, Montserrat’s joint record-holder with 21 caps.

“Not in a rude way, everyone did the absolute best they could. We just didn’t have the finances, the facilities, we didn’t have anything.”

Dyer, 32, is a Wealdstone midfielder in the National League who has played in Sweden, Norway and Kuwait. The paternal grandparents grew up on Montserrat. In 2011 he made his debut.

That year, the team was ranked as the worst in the world. A little over a decade later, they’re ranked 178th — but their advances run deeper.

“When I started, we didn’t even have matching tracksuits,” Dyer continues. “It felt really disjointed, but it was just a small nation at the beginning of its journey.

“It gradually got better over time and in recent years it has exploded. We have a fantastic sponsor who understands that we are not just a team that wants to play football and win games. You get the trip and you get the island.”

Part of the problem was the lack of regular games – between 2012 and 2017, Montserrat only played seven times.

In 2018 things changed with the launch of the Concacaf Nations League which provided opponents of similar size and standards.

Since then there have been 18 games – and eight wins – all of which have been managed by Scotland manager Willie Donachie, who recently stepped down.

As the fortunes of the team changed, more and more people wanted to join. Recruitment wasn’t always easy.

“It’s been a long, long process,” laughs forward Bradley Woods-Garness, 36, who has helped find new players alongside old friend and teammate Dean Mason since his debut in 2012.

“Some people thought it was a hoax when someone was joking around asking them if they wanted to come and play international football.

“But once I can finally get on the phone with people and explain to them where we are at the moment – what players we have on board, where we’re going and who we’ve beaten – it worked out fine. “

New arrivals include Nottingham Forest forward Lyle Taylor, who made his debut for Montserrat in 2015 while at AFC Wimbledon. He is now their record goalscorer with 10 goals.

Former Salford City midfielder Matty Willock, whose brothers Joe and Chris play for Newcastle and QPR respectively, made his debut in 2021.

Standards and results have improved beyond recognition. Montserrat came tantalizingly close to qualifying for the 2019 Gold Cup, the Concacaf equivalent of the European Championships, just missing the goal difference against El Salvador, a country of 6.5 million that is 100 places ahead.

“There will be some losses, but lately we’ve won and people on the island are happy about it,” Dyer said.

“It gives them some joy and something to cheer about and it inspires the younger generation of kids. They can look forward to maybe playing for the country themselves when they are older.

“You didn’t see kids playing soccer in the old days. Now if we think about it, they have a whole production line. They may or may not be successful at football, but it gives them a drive and a passion that they will use in other areas of life.”

Longer time on the island has given the team a much deeper understanding of who they represent and what it means, not to mention the passionate support they can count on. The connection with the place has become stronger for the players.

“Even though we grew up in the privileges of a western country like England, going there is so refreshing because it brings us back to who we are in our DNA,” adds Dyer.

“They still do tours to the areas where it’s not that dangerous so you can see what happened. It’s pretty upsetting, but it’s part of the island’s history. It has made them even more of a community and made people care about each other more than ever.

“Once you see people and see how proud they are of us, we owe it to them to do everything for them, even if we lose games.

“Our ship is football, but we have many players who have done things outside of football, which is commendable in raising awareness of Montserrat. To just show off its beauty and what it is.

“The character of what we do will remain. That is the most important thing for us.”

A Gold Cup spot remains the goal for Montserrat, but just a win in the first four games of the 2022-23 Nations League means they face an uphill battle to qualify. It might not happen this time, but they are undoubtedly going in the right direction.

“We can taste how close it is, and the standards we’ve implemented now mean that if we don’t make it, we’ll be disappointed,” says Dyer.

“Even though we go into pretty much every game as underdogs, we have the confidence and borderline arrogance to know we’re a good team and can beat even some of the bigger nations.

“You have good times and bad times, but everyone knows why we are there and what we are doing it for. Everyone is just out there doing the best they can for the country.”