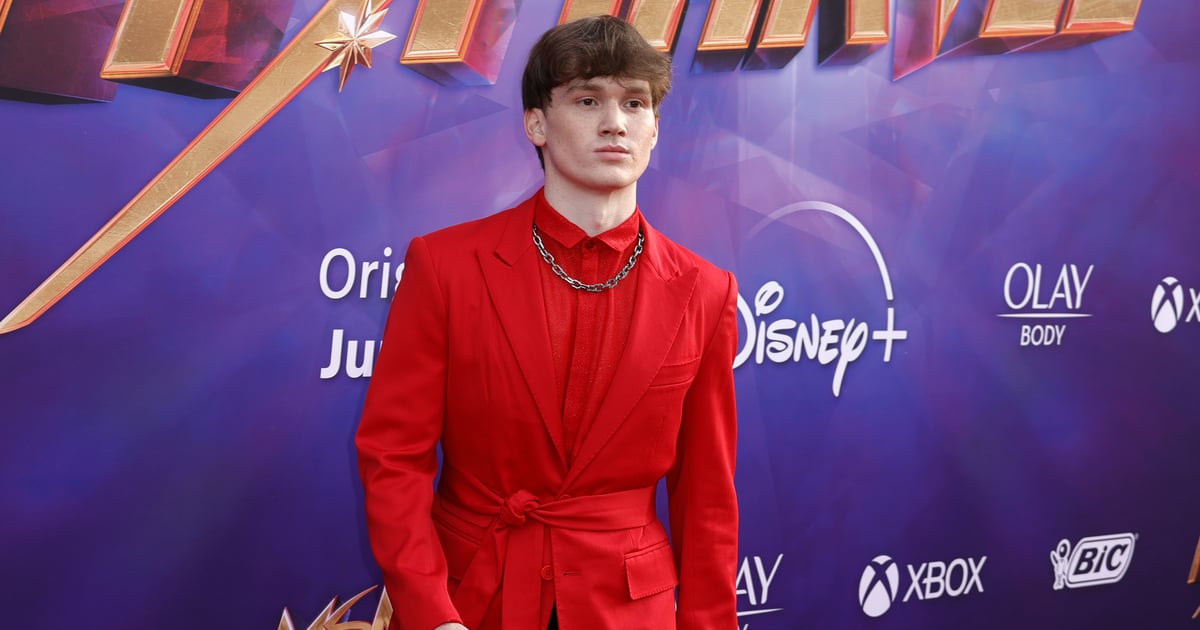 In our POPSUGAR Crush Q&A series, we get to know some of the more intimate details of our favorite stars – from their first celebrity crush to the best love advice they’ve ever received. This month we are in “Ms. Marvel star Matt Lintz crush.

Matt Lintz graces our screens again, this time in Disney+’s Ms. Marvel”. Based on the “Ms. Marvel Comics, the new series follows Imani Vellanis Kamala Khan, a 16-year-old girl from a Muslim Pakistani-American family living in Jersey City, New Jersey. Kamala – who is a huge Captain Marvel fan – is struggling to find her place in the world when she suddenly ends up with superpowers of her own.

Lintz – who you’ve probably seen on The Walking Dead, The Alienist, and Pixels – plays Kamala’s best friend/love interest, Bruno Carrelli. “Bruno is Kamala’s tech-savvy best friend. He’s very sensitive, very loyal, and very protective,” Lintz tells POPSUGAR of his character. “Then you have this Kamran [Rish Shah] Character comes in and he becomes very protective towards Kamala but he is best friend of Kamala since he was young. It’s like he’s part of the family. They have a very, very close relationship.”

“It’s one of the most relatable Marvel stories you can watch.”

Speaking of Kamran, it sounds like Kamala has a love triangle on her hands, though Lintz says it’s “definitely up for interpretation.” He adds: “Bruno rocks his world when his best friend gains powers and he’s trying to figure this out and overcome any problems this can cause and the excitement it creates [it all]. And then we go to this party, and this handsome Brit comes out of the water, and he might get a little bit upset or insecure, and that introduces more issues or other dynamics in his relationship with Kamala.”

To make sure their chemistry translated to screen, Lintz and Vellani spent a lot of time in pre-production figuring out Bruno and Kamala’s dynamic and what their relationship would feel like in real life. “All we wanted to do was make sure that when people saw us on screen, it looked like we’d been friends for years,” says Lintz.

“Ms. Marvel” is Marvel Studios’ first project to focus on a Muslim character, which Lintz says is “a big step, not just in the Marvel Universe, but in the world.” “It’s a show about a young girl who traverses through high school and becomes this superhero. It’s one of the most recognizable Marvel stories you can watch. I mean anyone, any age, any skin color, anyone can look at this and find a character that they can relate to. And diversity is something that’s very important,” Lintz says. “And to have a small part in telling this beautiful story about Kamala Khan and this world in Jersey City is great. And it’s just so different in the way it’s shot… the audio is so different than anything people have seen and it’s really refreshing. I think people are going to love it.”

Are you Team Bruno or Kamran?

OK, so me and Rish [Shah] talked about it a lot. He is Team Bruno and I am Team Kamran. We actually have shirts printed.

What love advice do you have for Kamala Khan?

If you could have a superpower, what would it be?

It would be teleportation. Flying is great and all, but teleportation is so convenient. Flights do not have to be paid for. You can just go wherever you want.

Aside from Ms. Marvel, who is your favorite Marvel character?

There are so many. I grew up watching Toby McGuire’s Spider-Man and all those incredible MCU movies. But if I had to choose, I love the Winter Soldier. I think he’s a great character. [“Captain America: The Winter Solider] is probably one of my favorite films too.

Who was your first celebrity crush?

I think it was Ariana Grande. I used to watch all that Nickelodeon and Disney stuff.

What is your idea of ​​a perfect date?

For me personally, it’s a place where you feel most comfortable with your better half. It could be anything – a car, a nice dinner overlooking a river, anything. It has to be candlelight and maybe some flowers, but a candlelit dinner in a cozy place.

What is your favorite form of self-care?

I love going to the gym. I discovered the gym a few years ago and have kind of stuck with it. It’s a way for me to relieve stress and clear my head a bit, and it’s also healthy for my body.

Just be yourself, and that sounds like a corny answer, but I know so many people who try to hide who they really are and try to be someone they’re not. Being 100 percent genuine and comfortable with who you are is the most attractive quality I see in someone and it goes a long way towards that.

The biggest distraction would probably just be trying to use people for your personal gain. I know a few people like that and it’s just a big turn off. I love sincere people who love themselves but are also very empathetic and understand others as well.

What’s the most romantic thing you’ve ever done or ever been done for you?

I’ll go with a newer one. I took my girlfriend out, I bought her some flowers and we went to the place where we had our first date on our five month wedding anniversary. We went back to the restaurant where we first met which was nice. [The restaurant] was very important and it holds many memories.