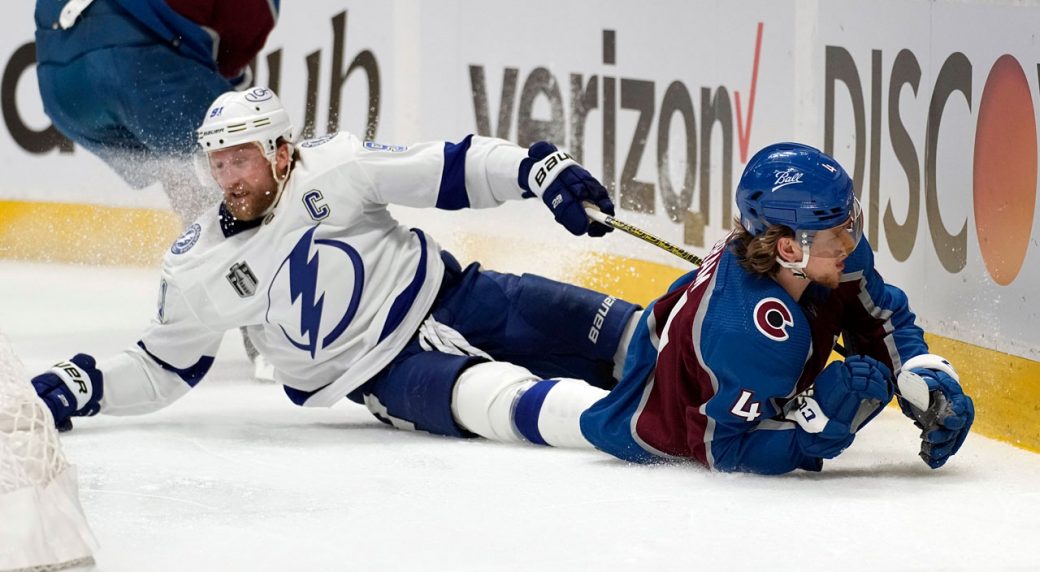 DENVER — As he rode the elevator down from the press box, the barn still loud and shaking from a hometown overtime winner, Colorado Avalanche icon slash manager Joe Sakic said what everyone was thinking: “Great hockey game.”

Of course, Sakic – the youngest captain in this city to lift the Stanley Cup – is biased.

But he’s not wrong.

Case by case, Game 1 was an exciting ride. Elite skills and quick game breakers in all their glory. A comeback and a counterattack. And a noisy, bobble-wielding, Blink-182-chanting crowd that never let up. Much like the game’s breakneck pace.

A few more like Sakic’s side winning 4-3 in overtime and hockey could crown a new champion.

Hell, even Tampa Bay Lightning coach Jon Cooper had to admit that “the right team won the game” on Wednesday.

“The crowd is going crazy. They’re all jacked,” Cooper said, digging a 1-0 hole for the third time in a row in this playoff. “This is a different team. We’re not used to seeing them. They play at an extreme pace.

“But our group, we should have handled that a little bit better.”

Lightning flew to the mountains only to dip his toe in the water.

Tampa began his threepeat bid hesitantly and out of sync. Some sloppy early zone exits and sluggish legs had the champions playing on their heels and from behind. The Bolts had to overcome their 2-0 and 3-1 deficits to force a fourth period.

Colorado applied targeted pressure and attacked in waves, earning a 5-on-3 power play (on a questionable Anthony Cirelli journey by Cale Makar) and pounce on the turnover in the neutral zone to draw the first blood.

Lightning Captain Steven Stamkos wondered if his group was starting too timidly. Like a seasoned heavyweight, Tampa has a penchant for spying on his opponent and getting a feel for his weaknesses before throwing any weight.

As the Lightning departed into the night, the Avs charged downhill.

“That’s a hell of a hockey team over there, and we knew they were going to do tough. They did,” Stamkos said. “Maybe a difficult decision in hindsight to give them a 5v3 but we fought to finish the game.”

Colorado took away the puck 17 times. Tampa only four.

“There was probably more turnover than we’re used to,” said Alex Killorn. “Especially when you play against a team that has as much talent as they do, you don’t want to give them these opportunities.”

Funny thing. Although the Lightning didn’t deliver their best game “by a country mile,” as Cooper put it, the champions were one shot away from stealing it.

Nikita Kucherov was no good until he scribbled around No. 2 D-Man Devon Toews at lightning speed and hit a tap-in on Ondrej Palat. Mikhail Sergachev didn’t have his best performance either, but he seventhed a smart point shot 48 seconds later to level the game.

At that point, a rare Lightning fan stood up in the midst of a bowl of burgundy, whirled around and addressed the laptop jockeys in the Ball Arena press box above him.

“Media, are you looking?!” yelled this gentleman in the Brayden Point away jersey, holding a local can of beer. “I hope you’re watching! That’s what champions do!”

In fact, that’s what they do.

Right now nobody should be shocked.

The Lightning trailed the Maple Leafs three times in Round 1. They dropped the first two games in New York in the semifinals.

“That comes from experience,” explains defenseman Zach Bosgosian. “We are a veteran group. We are a confident group. And no matter what situation is thrown at us, we feel like there really isn’t much that needs to change in the space.”

Sergachev shrugged off Colorado’s insane pace (“We Play Fast Too”) and his own costly turnover.

“It’s the usual thing. We lost Game 1 before. It’s a series,” Sergachev argued. “We’re going to take a day off tomorrow and relax, clear our heads and train. Go out on game 2.

“Nothing changes for us. We’re still a confident group.”

• Andrei Vasilevskiy allowed three goals in the first period for the first time in his playoff career.

However, Cooper stands behind him: “I thought he was dialed in. The first, moving screen, so that was a difficult question for him. The second maybe [he should’ve stopped]. But I thought he would probably be our best player tonight.”

Tampa’s Brandon Hagel (ill) did not attend practice Tuesday but was deemed healthy enough to play in Game 1.

When the league brought quadrilingual Pierre-Édouard Bellmare to the podium, a PR rep announced the player would first answer questions in English and then answer a few more in his native language.

“Which one?” Bellmare is dead.

Of course, after the English queries were completed, the Frenchman answered some in Swedish.

The Hagel-Cirelli-Killorn trio was outplayed 9-3 and outplayed 1-0 at 5-5.

Victor Hedman also broke in. Shots were 12-4 and goals were 2-1 in favor of the Avalanche, with the Norris finalist 5-on-5 on the ice.

• Point ran for 18 minutes, registering an assist and a takeaway and winning most of his draws (56 percent) on his long-awaited return.

“Was Brayden Point the Brayden Point before his injury? Probably not. But this is his first game in well over a month and we played against the fastest team in the league. So it’s difficult to get into, but I thought he did a great job,” Cooper said.

“Listen, he’s a warrior. He’ll gut it,” Stamkos added. “It was just great for him to come back and great and for our team to see him back out there. I thought he played well.”