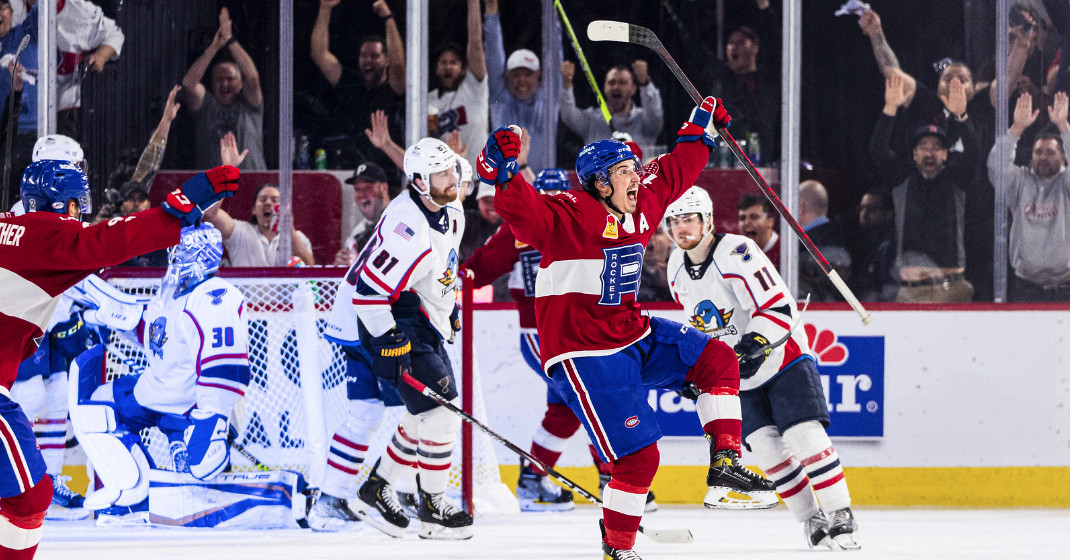 The playoffs at any level of hockey are a grueling grind, both physically and mentally for teams. The Laval Rocket entered Game 4 and fought their way through both as they even watched the series with the Springfield Thunderbirds at Place Bell. Game 3 started well enough, but a four-goal night by Will Bitten put the Rocket back two games to one when the final horn sounded.

With a one-sided loss hanging over them and some clear issues to address, J.-F. Houle made his first major changes of the postseason. Joshua Roy and Peter Abbandonato were dropped in favor of returnees Gabriel Bourque and Devante Smith-Pelly. Houle hoped the veterans could help rotate the physical fight and give the missile more room to operate with the puck. Also absent from Game 4 was Brandon Gignac, who picked up an injury in the previous game, and The Rocket opted to add another defender into the mix in Gianni Fairbrother. Cayden Primeau was again entrusted with the start and went up against Joel Hofer.

Tension was high when the game started, and it clearly affected the Rocket more than the Thunderbirds. Laval misfired on her clears, allowing Springfield to keep creating chances while Primeau held the line. However, Mackenzie MacEachern found an outrageous turnover after an attempt at clearance, and he made no mistake burying his chance of making it a 1-0 game.

Things didn’t get any better for the Rocket after that as Nate Schnarr was knocked up without a call and the Thunderbirds took advantage of him being down and out of the game. In the ensuing chaos around the Rocket’s net, Dakota Joshua was able to scoop the puck into back netting to give Springfield a pair lead early in the first half.

The second goal seemed like the kick in the pants Rocket needed as they took control of the game. Tirelessly they pushed for a goal, but Hofer did well to thwart every chance.

The pressure drew back-to-back penalties. Danick Martel shot off the bar and off target during the two-man lead and it looked like Springfield would come through the period unscathed. But with three seconds to go, Louie Belpedio recovered a face-off who quickly passed it to Xavier Ouellet, who shot into the net. J.-S. Dea got a small part of the shot to deflect it past Hofer to put Laval inside a goal, staying a split second in the first.

The second phase began with the Rocket clearly feeling the momentum shifting in its favor. While Hofer fended off the first few chances, he finally cracked when Cédric Paquette took center stage. Ouellet sent Paquette into the offensive zone with a leading pass and the veteran blew past his opponent before scoring a shot from under Hofer’s glove to make it 2-2.

While Laval controlled the game, the Thunderbirds were right back on their feet and didn’t allow the Rocket to retreat. But Springfield’s topline pulled a holding call on Belpedio with five and a half minutes left, setting up another crucial penalty for the rocket Springfield man advantage.

With Belpedio freed from the pits, Laval got back to work trying to break the deadlock. As the final seconds ticked by, Dea and Danick Martel nearly pulled off another buzzer-beater, but Hofer brought his pad to the post to seal one last chance.

Section three began with the Rocket coming out and pursuing the Thunderbirds in all three zones as they searched for a third goal. They came close when Alex Belzile and Martel created chances at the net, but Hofer denied them both to tie the game. Then it was Nate Schnarr who broke free to slot a pass into the slot for Jesse Ylönen, but the Finnish winger was just a step ahead of the puck and couldn’t make his chance very well in goal area.

From that point on, it was a non-stop back-and-forth as the two sides fought for every inch of ice they could find. The Rocket had taken over the role of the more physical side as Rafaël Harvey-Pinard and Tobie Paquette-Bisson threw thunderous checks down the boards. Both goalies didn’t have many saves to make, but they were quick to hit anything that got in their way.

With just under four minutes left, the referee blew the whistle again, sent Paquette into the box to slash and put the Rocket penalty back on the ice at a crucial point. A wild two minutes followed, marked by two short-handed chances for the rocket, and then Bitten somehow found himself on a breakaway that Primeau had to pin down.

Thanks to Primeau’s late heroics and penalty shoot-out, the Rocket went into overtime again hoping to level the series.

Overtime didn’t start well for them as the Thunderbirds kept them in their own zone and seemed poised to score at any moment. Even as Laval struggled to keep the pucks away from Primeau, they were able to move them away just far enough to survive the onslaught.

That survival set the stage for the rocket’s young leader and two wily vets to steal the show and snatch a victory from Springfield. Belzile charged deep into the offensive zone and once he was behind the net he turned and fired a pass at Sami Niku. The skilled defender fed a puck to Rafaël Harvey-Pinard in the slot and the young forward dodged away from the net before blasting it through Hofer to secure the Game 4 win.

As the Rocket celebrated their win, things got ugly when the Thunderbirds got involved in the celebration, creating a huge uproar including Klim Kostin attacking Lucas Condotta and Joshua trying to reach Martel as officers tried to get him to remove from the ice.

In the middle of it all is Dakota Joshua, who ends up delivering a few punches to Danick Martel as he’s forced off the ice. pic.twitter.com/t1qUNa8k6R

In the post-game report, it looks like Hofer sparked the whole thing by spearing someone, and there could be even more discipline for the postseason AHL save percentage leader.

With sentiment well above boiling point and officials appearing to be doing little to cool it, tonight’s Game 5 is sure to be a testy affair.