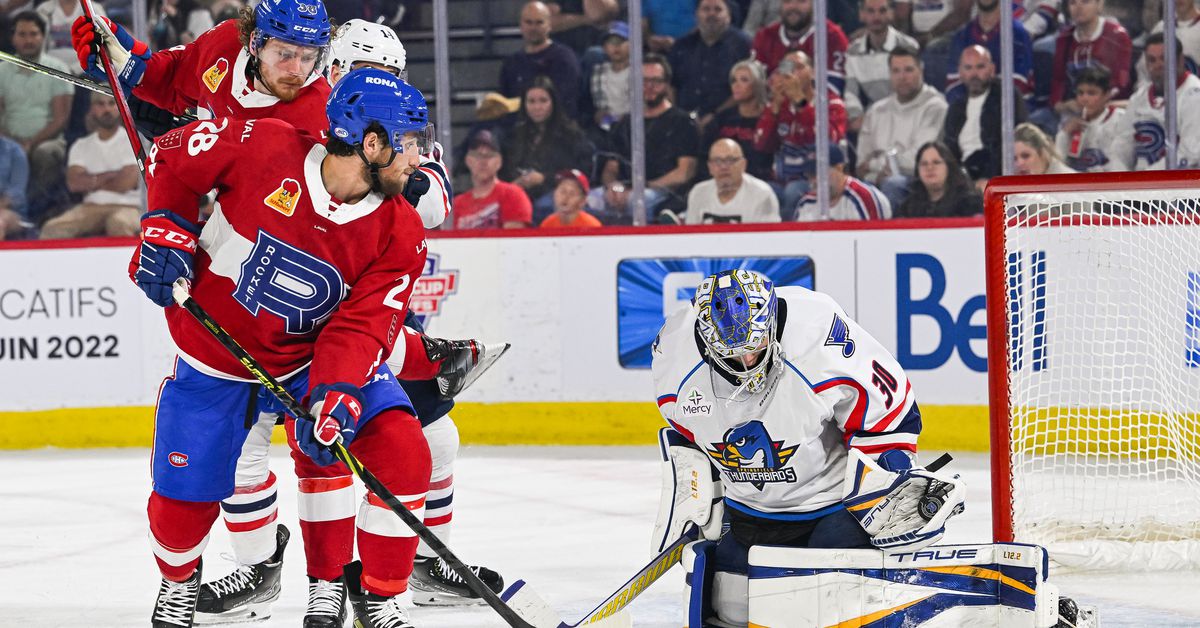 After earning a split en route to the Eastern Conference Finals, the Laval Rocket returned to the friendly confines of the Place Bell for Game 3 against the Springfield Thunderbirds. The Rocket bounced back in Game 2 with a strong 4-2 win behind a strong three-pointer from Jesse Ylönen.

They also won without Cédric Paquette, but he was back in the line-up for Game 3 alongside Joël Teasdale. The two were joined by Joshua Roy, who made his professional debut for the Rocket after Gabriel Bourque was out through injury. At net, Cayden Primeau remained the starter while the Thunderbirds trailed back to Joel Hofer.

The first two minutes were brimming with intense energy as the crowd came alive every time the missile touched the puck. Alex Belzile was a human wrecking ball, but even though the Rocket had the first chances, she also had to kill the game’s first penalty. Corey Schueneman went into the box to stumble, but as in Game 2, the penalty takers kept the Thunderbirds at bay to keep the game scoreless when Schueneman left the box.

As the Rocket defender entered the ice, he was sent in alone and pulled up to give Teasdale a pass that the forward just missed to get a stick in the crease. The Rocket wasn’t content with almost scoring and it wasn’t long before the top line found the back of the net. After hammering James Neal, Belzile sent a leading pass to Sami Niku that put Rocket deep in the offensive zone. Niku worked the halfboards before sending a one-timer setup into Rafaël Harvey-Pinard’s wheelhouse, and Harvey-Pinard drove it from Hofer to put Laval in front.

While the Rocket sat in the driver’s seat and followed its gate, Springfield was able to find a gate of its own. Schueneman tried to throw a pass out of the zone with his backhand, but it was intercepted, allowing Nikita Alexandrov to slide a pass to Nathan Todd to equalize.

Belzile’s veteran tricks allowed the Rocket to pull off the next penalty as he baited Dakota Joshua into a crude penalty. Laval’s man advantage moved the puck with authority, but when Joshua left the box, the Thunderbirds had the best chance with a short rush.

The nonsense from Game 2 continued into Game 3, with the Thunderbirds doing everything they could to legally or not legally face Primeau after a whistle. Eventually the frustration boiled over and the Rocket returned to the power play with Brady Lyle sitting to bat. The power play didn’t click again, and moments later the game was level again for a moment until Nate Schnarr was called for a high-sticking double minor.

The Rocket escaped the end of the third without conceding a goal but still had three and a half minutes to start the second period.

As the Rocket sped through Schnarr’s double minor, the light at the end of the tunnel was in sight, and then Schueneman fired a wide-open puck, forcing the Rocket to down two men. An impressive display from Laval’s penalty takers kept Springfield off the board despite a fierce Thunderbirds charge.

As the season progressed, neither side really gained the upper hand, although the Rocket again struggled on penalties. Danick Martel was sent into the pits to rough out after a big scrum broke out and he was soon joined by Tory Dello, who had shot the puck all the way over the glass at the other end of the ice while clearing it away. The Rocket killed penalties again, thanks in part to another incredible run from Primeau, and the game was tied early in the final five minutes.

However, some defensive mistakes late in the period brought the Rocket back on their heels. Joshua drove hard to the slot in front of Primeau and his chance returned to Hugh McGing, who turned in the puck to put Springfield in front. A little over two minutes later, it was Will Bitten who doubled the lead and rocked the Rocket as the third drew to a close.

After two difficult periods, Schueneman found a way to keep Laval’s hopes alive. He carried a puck deep through the neutral zone before handing it over to Martel. The Rocket forward returned the puck straight, allowing Schueneman to snap his first of the playoffs past Hofer and make it a one-goal game.

That deficit immediately became two again to start the third period when a blind-fired shot ricocheted off Bitten and Primeau just 35 seconds later.

The Thunderbirds then put a golden opportunity on the table for Laval when Steven Santini went to the box to level. As the Rocket power play increased, Tyler Tucker checked Paquette and turned it into a five-on-three for Laval for 80 seconds. To call the following power plays disastrous would honestly be generous, since Rocket didn’t generate any real threat and ended up conceding a hat-trick goal to Bitten.

After mostly keeping their tempers in check, the Rocket finally hit back after Joshua threw a hit straight into the numbers. Belzile began throwing punches until Joshua was thrown onto the ice, earning him an extra minor and a misconduct. Laval killed Belzile’s penalty then went right back on the kill as Teasdale pitted to rough.

The Rocket pushed into the offensive zone and allowed Primeau to go on the bench. Again, it was a sloppy play in the defensive zone that resulted in Bitten firing a miss and burying his fourth goal of the evening to seal the game for Springfield.

Nate Schnarr added a goal in the final seconds, but it was too little, too late.

With days to lick their wounds after a one-sided defeat, The Rocket must find a way to get their power play back on the right track. Game 4 takes place at Place Bell on Friday night.