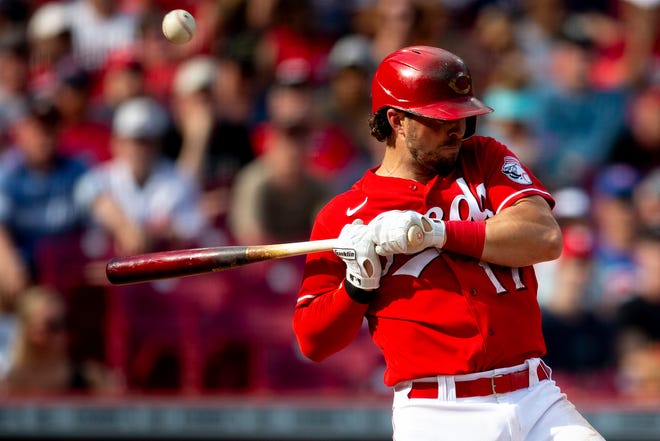 Kyle Farmer, one of the stalwarts of the Cincinnati Reds roster, ended Saturday’s 4-1 loss to Atlanta after being hit in the left hand by a 100 mph fastball in the fifth inning.

Farmer was obviously in pain after being hit on the fourth pitch of his second at-bat against Atlanta rookie Spencer Strider, who has yet to surrender a hit. He previously fractured the bone on the underside of his wrist and that was his first thought as he lay on the ground.

Fortunately, Farmer avoided the worst-case scenario. X-rays were negative for a fracture.

“I’ve broken it many times and I know that feeling,” Farmer said. “I thought it was broken. I was pretty pissed, but thank god it’s not broken.”

More:Cincinnati Reds substitute Lucas Sims will miss the remainder of the 2022 season with a back injury

More:Which players could trade the Reds? A breakdown of trade candidates by tier

Farmer screamed in pain as he stood up. Walking to first base alongside coach Tomas Vera and manager David Bell, he grimaced as he removed his left batting glove. After reaching first base, it was a brief conversation before Farmer returned to the dugout and was removed for Matt Reynolds.

Speaking to reporters afterwards, Farmer said he felt a sharp and stabbing pain in his hand, but hoped he wouldn’t miss more than a few games.

The news that Farmer didn’t break his hand came as a relief to his teammates and coaches. Everyone feared the worst.

“It hit him pretty square, so you hold your breath and just hope and pray it’ll be alright,” Nick Senzel said. “In short, he’s our type and we want him to be with us every day. You never want to see that, but I don’t think it was intentional. I was just happy to see that he was okay.”

Bell stayed on the field to chat with home plate umpire Tripp Gibson. After a lengthy conversation that looked relatively calm, Gibson threw Bell out.

The ejection enraged Bell, who yelled at Gibson as crew chief Laz Diaz tried to separate the manager and umpire. Bell’s lively argument lasted more than a minute as he attempted to circle home plate to continue his discussion with Gibson.

“Definitely nothing against the pitcher,” Bell said. “He was trying to pitch. I pointed out that hitting a few pitches earlier in the game from the outside of the plate kind of forces our batsmen to dive out there. That’s all I said.

After Reds coach Freddie Benavides tried to talk Bell out of an argument with Gibson, Bell briefly went to the dugout before continuing his argument with Diaz.

It was the second time Bell had been kicked out this season and the 18th time in his four-year managerial career.

The Reds lost their fourth straight game on Saturday and lost ten straight home games. Has some of the frustration over Bell’s sacking built up?

“Absolutely not, it had nothing to do with losing game frustration, it was completely separate,” Bell said. “There is a lot of frustration – staff, players, myself. I know our players are doing absolutely everything in their power to reverse this. Our employees do the same. So I search long and hard for what I need to do to reverse this and get it going in the right direction. That’s really our only focus.”

Atlanta outfielder Adam Duvall was hit in his left hand in the second inning by Reds starter Tyler Mahle from a 92-mile fastball. Duvall stayed in the game as a baserunner, got picked up from first place with loaded bases, but didn’t return for the third inning.