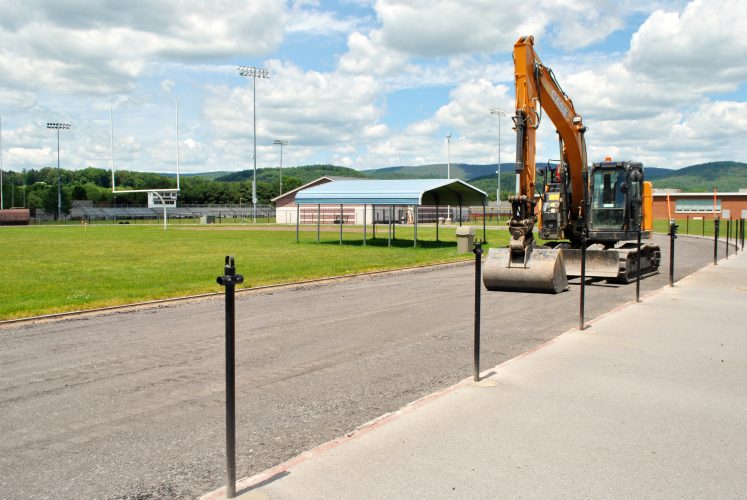 CHRIS MORELLI/THE EXPRESS Work is underway on the track at Central Mountain Middle School. During Thursday night’s Keystone Central School Board working session, the board heard a report on the district’s athletic facilities.

The study, conducted by ELA Sport of State College, provided a closer look at the district’s inventory and made some recommendations for the 17 fields located at three of the district’s schools – Bucktail High School, Central Mountain High School and Central middle school mountain.

Facilities Committee Jeff Johnston spoke about why the study was necessary.

“I think a long time ago, nine or ten months ago, we started this process with the Facilities Committee.” said Johnston. “I think it started with us looking at what we could do for a baseball field. I think that was the real starting point. From that point on, we have expanded to all of our sports facilities.”

Johnston said it was more than the facility committee could handle that led to ELA Sport being used.

According to Johnston, no decisions were made and no funds were allocated to projects.

Todd Smith, a representative from ELA Sport, was on hand Thursday night to delve further into the 85-page report, which broken down proposed improvements, changes and costs.

“We looked at facilities across all campuses,” said Smith.

Smith said ELA Sport surveyed the condition of each field and facility. He also looked at the sports played on each campus and how many student-athletes participate.

Although there are some suggestions and recommendations, Smith said they do “Preliminary, conceptual and for budgetary and planning purposes.”

Smith started the Bucktail campus. That’s where the tennis courts should be, he said “Overhaul, refurbishment project.” Baseball, meanwhile, would see one “Conversion of the existing field.” The big project, Smith said, would take place at Dwyer Memorial Stadium, which needs some improvements.

“The field itself is in pretty good shape. There are some things that need fixing in relation to the lawn itself. The grandstands need some upgrades,” said Smith.

There are also some ADA accessibility issues, Smith noted.

“It’s in good condition because you only renewed the lawn a few years ago,” Smith remarked.

The college softball field, he said, had a few “drainage problems” along with erosion problems in the infield. He also spoke about several improvements at the junior varsity softball/soccer field. The high school tennis courts need to be rebuilt, Smith said.

Utilities, he said, need to be determined.

At Central Mountain Middle School, Smith recommended removing the tennis and pickleball courts due to their condition. It could be repurposed for outdoor recreation and physical education classes, he said. The grass area within the athletics area, he said, needs improvement. In the report, ELA Sport recommended converting the middle school’s track and field area into a stadium with lighting and new stands. Nearby McGill Memorial Field would become nothing more than a practice facility. This project was the most expensive in the report at $3.1 million.

“We would need to add a scoreboard, grandstands and some parking lots.” Smith remarked.

The athletic facilities at CMMS need a lot of work and improvement, Smith said.

Like Johnston, Smith said the study was merely a report for the district to consider.

“It’s a study with recommendations” Smith explained. “The district can now use that … to review potential projects, prioritize them, move projects forward in a way that you see fit for your budget and needs.”

The Keystone Central School Board will hold a voting session on Thursday, June 16 at 6:30 p.m. The meeting is open to the public and will be streamed live via zoom on the district’s website.