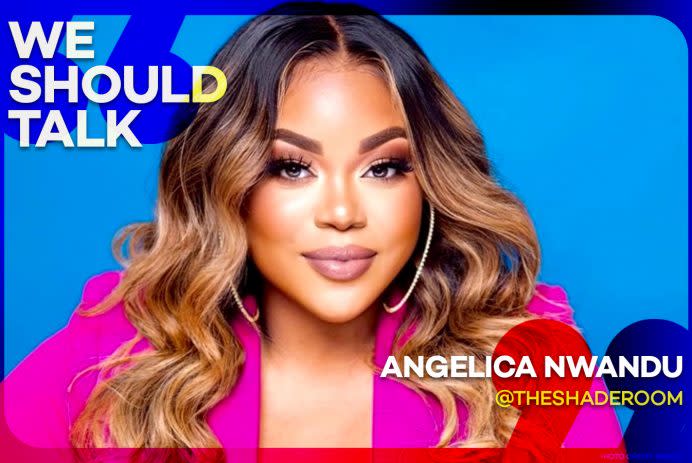 Tune in we should talk every Thursday where In The Know’s Gibson Johns interviews your favorite stars and influencers. Subscribe to something we should talk here.

When Angelica Nwandu founded The Shade Room in 2014, she had no idea how drastically she would change the landscape of entertainment news.

Until then, legacy news outlets used Instagram to push users back to their sites. It was a traffic driver, not a brand builder. But Nwandu didn’t have the resources to create a website at the time, so she started curating news directly on Instagram. By bypassing the need for a website in the first place and streamlining the user experience of publishing celebrity news, Nwandu, a millennial, changed everything. While all news outlets would soon follow suit, she and The Shade Room, aka TSR, had a head start.

For the latest episode of In The Know’s pop culture interview series we should talk, Nwandu recounted her nearly decade-long journey to build The Shade Room into one of the top social media news brands in the world. She reflected on some of the challenges she overcame along the way and shared new details about her inspirational backstory.

Listen to In The Know’s full interview with Angelica Nwandu below and read on for interview highlights:

On her proudest achievements since forming The Shade Room: The achievements I’m most proud of are the things we don’t really talk about. For me to be able to build a business [with enough of a] I am proud to be able to receive scholarships and foundations. No matter how long The Shade Room lasts, this will always be there. Of course, this has to be one of the things we are most proud of because it is more fulfilling and has a longer lasting effect. Besides, I would say [being on] Also, TIME Magazine’s list of 30 Most Influential People. That was at the beginning of our journey. […] To be so honored on a list of many people I respect and admire in business? That was definitely a proud moment.

About the earliest celebrities to come on board with The Shade Room: Kim Kardashian, which was very surprising to me. Kim Kardashian was very supportive early on. We got invited to a listening party with Kanye [West], we got everyone’s drops, she mentioned it on the show, she posted it on her social media once… so she’s been very open about it. Oprah Winfrey, we caught her early. She knew about it.

When launching The Shade Room with the few resources it had: What really happened to get me started was, yes, I needed a rush, and yes, I needed money, but I also didn’t do anything other than work on a script all day. I had time to try things, so I just gave it a try. I had plans for it, but my plans for The Shade Room were so small. I just wanted 100,000 followers to help me build a website. That was it; I never thought it would be something like this. But I tried, and I tried in a way that didn’t make sense because I didn’t know how to make a website. I tried with what I had in my hands, these were my resources. I have a friend who wants to start a podcast and she was like, “I have to get all this gear.” I was like, “But you have your phone!” It’s 2022 and movies were made on a phone! So I just worked with what I had and that’s how it started.

On The Shade Room’s success in giving back to its community: Giving is very important to me because I was a product of people who gave me something. For as long as I can remember, people in my life have turned up for me when I needed them. it’s so crazy [how many] times. If you look at the companies that I give to – with Peace 4 Kids, I was actually with Peace 4 Kids when I was younger and I was a product of their program. Of course I have to give something back to them because I want other people to have this experience! UFC – I was part of United Friends of the Children for foster children. I go back to those who helped me and I give to other people too. I had a scholarship and was able to go to the LMU [Loyola Marymount University], so now we want to give scholarships to people. You are never blessed with much for yourself.

Watch In The Know’s full interview with Angelica Nwandu below and follow The Shade Room on Instagram here:

If you enjoyed this interview, check it out In the last chat of The Know here with Amanda Hirsch, from “Not skinny but not fat“!

The post How The Shade Room founder Angelica Nwandu revolutionized celebrity media first appeared on In The Know.