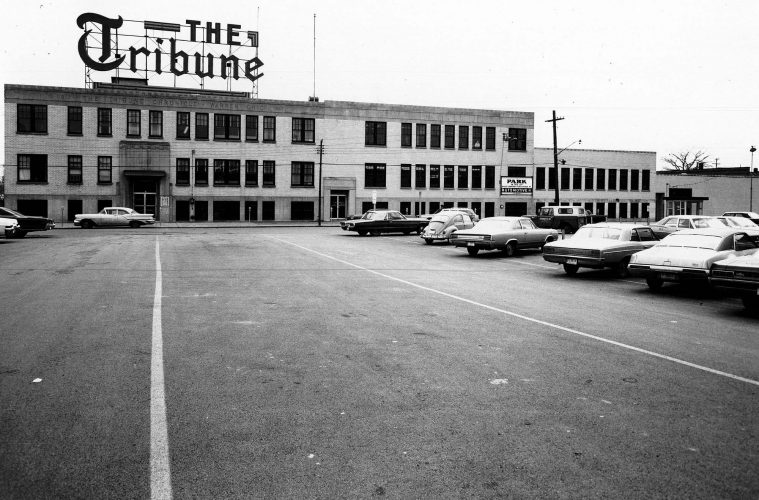 Personnel File Photo A large sign is located on the Tribune building in 1973.

WARREN – Thomas Denny Webb, the man who published the first issue of The Trump of Fame on June 9, 1812, once considered naming his newspaper A Voice from the Wilderness.

Now, 210 years later, the Tribune Chronicle — the newspaper that grew out of that four-page publication — stands in an increasingly crowded media forest.

This first newspaper predated the telegraph and the telephone. Delivered more than a century before the first scheduled radio broadcast, it has survived the advent of television, internet, social media, and other channels also available to deliver news and information.

“In the last 20 years, we’ve probably seen more changes in the newspaper business than ever before in such a short space of time,” Publisher Charles R. Jarvis said. “Obviously we have been much more focused on how to keep our newspaper contemporary and how to adapt to the digital age. We deliver our newspaper on so many different platforms and in so many different areas – our replica digital edition, on the website of course, and even utilizing multiple social media platforms.”

These early newspapers informed their readers and continue to help the community understand its past.

Meghan Reed, executive director of the Trumbull County Historical Society, said: “The newspaper is an incredibly important resource in giving us a clear glimpse into the daily lives of the first people to settle here from Connecticut…These early newspapers are the greatest early research tool there is.”

The line connecting the Trump of Fame to the publication containing this story is a circuitous one. Throughout the 19th and 20th centuries various publications were started, sold, rebranded, merged and adapted to the changing times.

“It was a turning point for our newspaper” said Jarvis.

It allowed publications to continue print editions and home delivery seven days a week, at a time when many newspapers have scaled back one or both.

“I think we have a very strong reader base here and a very strong advertising base that allows us to produce a newspaper seven days a week and a very dedicated transport force that helps us deliver the newspaper seven days a week, so I think we’re very different from a lot of communities that have scaled back their newspapers,” said Jarvis. “We’re just blessed to have an enormous staff of dedicated journalists.”

While some of the delivery platforms have changed, Jarvis said the newspaper’s mission remains the same.

Brenda J. Linert, a veteran journalist who has served as an editor here for eight years, said the key to producing a quality publication is always accuracy and balance.

“Honestly, I find it amazing that after 210 years our products are still very relevant to our community.” said Linert. “Our readership still turns to us every day for local coverage they can’t get elsewhere — whether it’s finding out what happened at their county commissioner meeting, getting detailed stories about high school football games, or to read the local obituaries.”

“I still think our clients rely on us for fair reporting,” he said. “They rely on us for promotional information that saves them money. I don’t think that much has changed there. They count on us to be the people who care the most about what’s going on in this community.

“It’s incredible for us to be 210 years old. I assume we are the oldest or one of the oldest surviving businesses in the community. It’s just amazing that we have the support to keep doing what we do.”