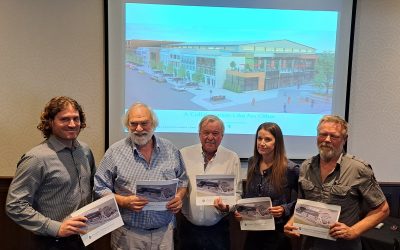 The modern plans include a community center and boardwalk with a new City Hall, public library and museum in the former Sears Building, an entertainment complex with a new community-owned 4,000-seat hockey arena and a local Hall of Fame at the center, and a third phase closer to Retro Suites which could be converted into more hotel suites or apartments. The proposal also mentions the retention of land behind the buildings for future private sector commercial and residential development.

Rob Myers, one of the DCC’s co-owners, said the idea was to revitalize the downtown core so that it would be welcoming to families across Chatham-Kent and beyond, draw future businesses and developments into the core and house all community services Roof.

Myers and his partners Don Tetrault, Jessica and Pete Tsirimbis, Ron Nydam and Jim Bullock will present the concept to the Chatham-Kent Council at their virtual meeting Monday night, and council members should have a final report for approval in a few months.

Myers said the redevelopment of Downtown Chatham Center will be “a game changer for the area over the next 50 to 100 years” and will bring a lot of spirit to the community.

“This will create jobs, this will be a pride for the people of our entire Chatham-Kent area. So we think it’s right for this space,” said Myers, spokesman for the ownership group.

Myers said families, young and old, would benefit from the revival.

“This area still only attracts mediocre jobs, but not good jobs. What the hell are you doing here with your kids? Go to London, go to Detroit, go to Windsor? Why not be able to stay close to Chatham?” Myers said.

Myers said the planned arena will be state-of-the-art and will host many non-hockey events.

Myers said the Chatham Maroons will play in the new arena when it’s finished and also set the record straight by saying that none of the DCC owners have bought a hockey team to play in the new arena. However, he said it leaves the door open for an Ontario Hockey League team to move into the new facility when the time is right.

The revitalization project is expected to be just over 400,000 square feet.

Owners said shovels should go into the ground this fall, if the council approves the project, and the entire cleanup should take about five years.

The mayor said it’s unclear at this point whether the project will have any impact on council taxes, adding it would depend on how many surplus council-owned buildings could be sold. However, the mayor is betting that this project can increase the municipal tax base to keep taxes low and create good-paying jobs.