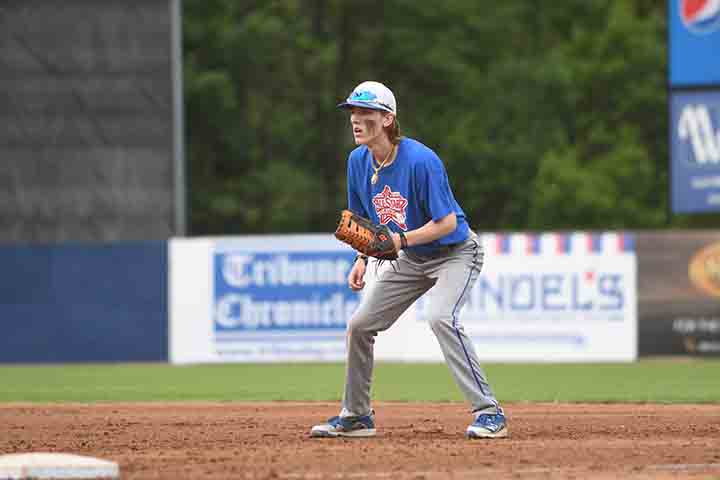 Staff Photo / Brian Yauger. Lakeview’s Cal Rinck plays first base at the High School Valley All-Star Classic at Eastwood Field earlier this week. Rinck finished his career on the diamond and will now go to Akron to play for the Zips Club ice hockey team.

Given his name, it’s only fitting that Lakeview’s Cal Rinck would lace up the skates.

Before that, however, the four-year-old letter-winner in baseball had one last chance to represent the Bulldogs as part of the High School Valley All-Star Classic.

“It was really cool,” he said. “I didn’t hear about it until recently, but it was a fun way to just end my high school career and my baseball career.”

In the dugout he made all the jokes.

At some point during the game he landed on the ground, then walked back to the dugout and jokingly said “I hate baseball” with a huge smile on his face. He shared stories of his experiences on the ice with his Trumbull County teammates, including a fight he attended and won. Almost out of instinct, he even hopped over the dugout fence to take over the field.

While he last represented his high school on the diamond, Rinck’s heart belongs on the ice.

Now that his high school career is over, Rinck is about to take his next step. Back in April, he announced his commitment to the University of Akron to play for their club hockey program.

“I know a few guys that go to Akron and I’ve met the coaches before.” he said. “I’ve ridden in a few practice sessions for Akron, so (I think I’ll fit in).”

The Zips are part of the American Collegiate Hockey Association and face schools like Dayton, West Virginia and rival Kent State.

So what sparked this love affair with sport? According to Rinck only to see the game in person.

Because Lakeview doesn’t have a hockey program, Rinck had to explore other options if he wanted to make that dream a reality. While Canfield was closer and the only high school in the Mahoning Valley to offer hockey, Rinck chose to play with the Kent Cyclones, based in an arena on the Kent State campus.

The Cyclones are part of the North Coast High School Hockey League, where they competed against schools like West Geauga, Medina, and other location-based teams like the Wooster Oilers and Canton-Akron Jets.

Kent went 13-1-2 that year and became the regular-season champion.

Prior to that, Rinck spent time with the USPHL Premier’s Lake Erie Bighorns, who were based in Erie, Pa for parts of 2021.

It’s safe to say he enjoyed the experience.

To prepare for the jump to the college game, Rinck left Wednesday’s game at Eastwood Field and immediately jumps back into it.

“(This summer I’m just) hitting the ice as much as possible.” he said. “Stick handling in the garage, (Thursday) I go up and play like a men’s league game just to stay loose and keep those legs going.”

The ACHA season begins in September. Akron plays its home games at the Center Ice Sports Complex in North Canton.