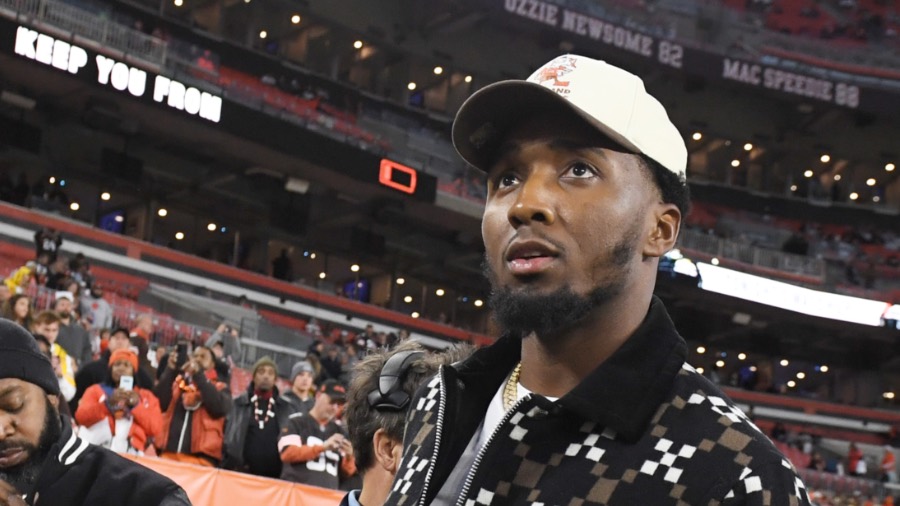 The Browns welcomed the Steelers on Thursday, September 22nd.

Mitchell attended the game wearing a No. 45 Browns jersey and a “Brownie the Elf” hat.

Before the game, Mitchell primed Browns fans for divisional competition by smashing a Steelers guitar over a speaker with Cleveland’s helmet logo. After a few hits, the guitar was demolished and shattered into pieces.

Not only is Cleveland home to the Browns, it’s also the location of the Rock & Roll Hall of Fame.

Mitchell also spoke to Thursday Night Football’s Taylor Rooks ahead of the game and said his new team, the Cavs, have “a team that’s ready to compete.”

“Honestly, a guy who just works non-stop… We have a team that’s ready to compete.”@spidadmitchell to Cavs fans on what to expect from him this season

The Jazz traded Mitchell to Cleveland in early September.

“We need to see how you lit up the league as a rookie and cheer for you as you became a perennial All-Star,” the Jazz thanked Mitchell in a social media post. “We have seen you embrace and serve our community while standing up for what is right and uniting jazz fans everywhere. Thanks for all the good you’ve done here @spidadmitchell.”

Mitchell spent five seasons with jazz. He appeared in 345 games from 337 starts, averaging 23.9 points, 4.2 rebounds and 4.5 assists per contest while shooting 44% from the field and 36% from the three-point line.

The Louisville product increased his scoring average in each of the first three seasons. During the 2020-21 season, Mitchell averaged 26.4 points per contest before falling to 25.9 last season.

Mitchell helped organize Jazz to the playoffs in each of its five seasons. He played in 39 games and averaged 28.3 points, 4.9 rebounds and 4.7 assists while shooting 43% from the floor and 36% from downtown.

Kyle Ireland is a Locals in the NFL Insider for KSLSports.com and co-host of the Yards After College Podcast. Follow him on Twitter (@kyleireland) and Instagram (@kyleirelandksl).