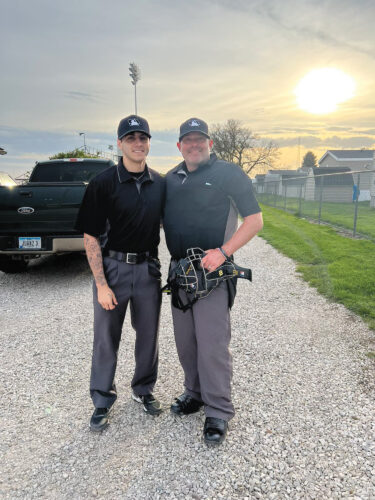 – Submitted photo Mateo Martinez and his stepfather Jason Berning have been referees in the area spending time together on the field.

Jason Berning always wanted to be a referee, but it wasn’t until he turned 40 that he did it.

In his early 20s, the current Clarion Goldfield Dows boys’ basketball coach tried to make it on the field, but it didn’t work.

“I started when I was 20 a few years ago,” Berning said. “A friend of mine persuaded me to go to a professional refereeing school. At the time I didn’t know what I wanted to do and I wanted to see what it was like. I attended Brinkman Fleming Umpire School but I didn’t make it.

“When I came back I went to college and got involved in education and coaching. After I left baseball coaching, I was still interested in umpires.”

Berning, 47, was the Clarion-Goldfield-Dows baseball head coach for 11 seasons and spent four seasons with Anita-CAM.

“I’m a baseball guy and I wanted to be involved with baseball,” Berning said. “Over the years I’ve fallen in love with everything and enjoyed being back on the field in a different way. As a coach, player and referee you definitely see the game differently.”

Last summer, a familiar face followed in Berning’s footsteps when his stepson Mateo Martinez joined him on the diamond.

“Last summer I talked him into a summer job and he worked with me and played lower level games,” said Berning, who just completed his freshman year as a cowboy basketball coach. “We played some games for him in Clarion, Eagle Grove and Humboldt to earn some money.

“Last spring he wanted to do it again and help with some lower-level games. He then said he wanted to work on some junior varsity and varsity games, which I was excited about.

“Fresh out of high school, I was just about to do middle school games,” Martinez said. “Jason told me there was a shortage of referees and if they didn’t have officials these kids might not be able to play and I didn’t want that to happen.

“It was also a good way to stay in touch with the game and that was a good part of it.”

Berning and Martinez also got the chance to work together.

“We have to work together a little bit,” said Berning, who umpired five or six times with Martinez. “I coached him in basketball, baseball, and football, so it was fun spending some time with him there.

“It’s great to have a young man who has that goal. I just want to make it positive for the younger guys so they come back.

Stepdad was a little nervous about his prodigy the first time he was on the field.

“I was a bit nervous for him,” Berning said. “He’s a very confident young man, but I know when I started refereeing I was nervous. Being 19 and dealing with adults can be tough.

“For our first two games of the year, we worked both nights at Webster City. The second game was Webster City and Ballard and I told him it was going to be a high level game and on the second night he did great.”

Berning was proud that Martinez’s confidence grew as the season progressed.

“As the season progressed, he became more comfortable,” said Berning. “When he was officiating games himself, he would come home and we would talk afterwards and see if he had any problems.

“He mainly did the bases, but he ended up doing the record. He wanted to start on the bases and get used to it.”

The best thing for Martinez was being able to spend some time with his stepfather and share what he learned.

“He (Berning) taught me a lot,” said Martinez, who plans to put together a team with Berning and a few other umpires to put together a schedule next season. “I was nervous going into this, but Jason, who has refereed a few state tournament games, knows what he’s doing.

“Learning from him was a blessing.”