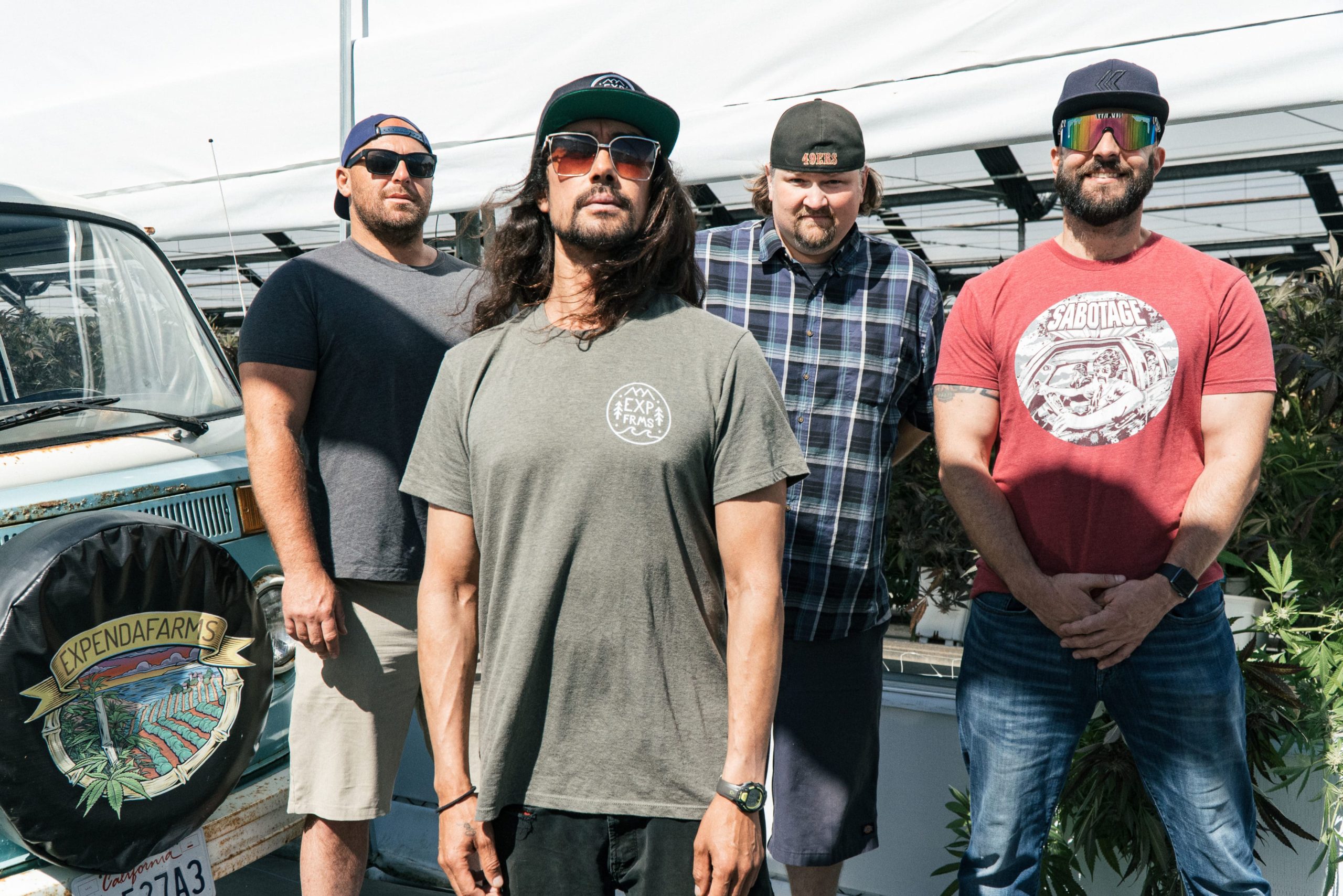 Founded in 2016 by The Expendables, the weed-worshipping west coast reggae rock kings, ExpendaFarms is a holistic and localized alternative to the typical flashy packaging/licensing deal shtick. While most mega-hyped celebrity brands throw money into over-the-top marketing campaigns, often neglecting flower quality, vertically integrated ExpendaFarms lives and dies on their traditional growing practices and robust “handed down” genetics that produce clean, terpene-rich buds of their own meets or exceeds strict self-implemented standards. By adopting a 0.0 PPB policy and a relaxed company culture steeped in lifelong friendship, ExpendaFarms is breaking with mold and raising the bar for the next wave of celebrity-branded cannabis companies.

Everything started when they were children. Geoff Weers (vocals/guitar), Adam Patterson (drums), Raul Bianchi (lead guitar) and Ryan DeMars (bass) are just a small town group of troublemakers known for traversing Pleasure Point and have as much cannabis history as they do music itself – or is it the other way around?

Blake Gallick, who has been immersed in the typical old-school Santa Cruz grower lifestyle from the start, explains that ExpendaFarms is all about that legacy mentality – pass me the genetics, information and knowledge of these old school growers . Our grandparents, cams [former band member and founding partner of ExpendaFarms] Dad, my uncle… they all had a huge impact on cannabis and the direction we were taken when we were young.”

Their touring band careers began as teenagers in the late ’90s, and the boys were exposed to a variety of genetics from breeders from all corners of California. Gallick says, “It started with backyard shows, colleges, a lot up in Chico, then Northern California, the Bay Area, then SoCal…her weed consumption was huge and everyone at the shows knew it. They have been passed on to so many different ones [kinds of] Flowers from so many different growers and they could be some of the first multi-area testers in the state.”

The resulting sky-high standards for nose, taste and everything in between shaped what eventually became the status quo for ExpendaFarms.

If you want something done right, do it yourself.

“We do it [at ExpendaFarms] like we used to do as a band… In our twenties we did whatever it took to make sure our shows were successful, even if that meant flying in front of the show every Tuesday. We had a map in our band house with areas everyone was responsible for and flyers up,” Weers recalls.

Each partner carries on their grassroots methods and street team mentality, bringing a different skill set to the ExpendaFarms table – just as they do with the band. According to Gallick, “The four are basically responsible for all product control, making sure everything is third-party tested… and then actually trying it themselves. They’re our number one [for] QC.”

While the band doesn’t do the daily chores in favor of playing and creating music, they are involved from top to bottom – even going so far as playing acoustic sets in pharmacies. Weers shares the motivation behind his tireless commitment: “I want to be a source of good cannabis for people. We want to be a trusted place where people can come and get good, sustainably grown, well practiced/produced stuff that tastes great and isn’t too bad for the wallet. We want that sweet spot in everything we do.”

So how do they make sure they hit the sweet spot? The answer lies in the cultivation system.

How do you do that?

Twenty-thousand square feet of greenhouse sits behind a nondescript chain link fence somewhere off the 101 freeway. Former band member and founding partner Cam Hanson’s baby-blue Volkswagen bus pulls up outside, stuffed to the brim with instruments and equipment for a later gig. Nestled among row crops and redwoods in the rolling hills of Aromas, California, ExpendaFarms is hatching the next crops of the brand’s signature strain, Expendaberry – the quintessential “frosty purple nugs” immortalized in their 2004 hit “Bowl For Two.” became.

Hiding among the sticky curlicues and black leaves, head grower Josh Blake peers through his readers and gives a brief overview of the range. “They’ll come down in the next few days,” he says confidently.

The second-generation UC Davis-trained horticulturist uses a variety of regenerative methods to keep plants free of pests, diseases, and terpenes. While some variables are environmental—“we have good well water from the mountains that surround us,” says Blake—most are the result of a conscious effort to be as organic and sustainable as possible. By using “organic pesticides, microbes and beneficial insects like ladybugs and persimilis wasps and lacewings,” he’s able to cultivate a living, breathing mini-ecosystem.

Blake continues, “We also add certain beneficial fungi to the soil to compete with pathogenic pests…like mycorrhiza, which helps draw nutrients from the soil and expand the root system to keep plants healthier.” Healthy soil plays a huge part in ExpendaFarms’ growing ethos, which is why their signature blend of “coconut fiber, coconut flakes, redwood (sometimes), peat, beneficial fungi and minerals” is always blended in-house. When the soil completes a life cycle with the plant, it is mixed with fresh soil and reused in the next run.

ExpendaFarms claims the regenerative label, “as much as we can,” according to Hanson. However, they do not claim the “organic” seal, although in a practical sense they are. Gallick explains that they “use all OMRI certified organic nutrients and compost teas. If we were tested by the FDA, we would pass as organic, although there is currently nothing that would certify cannabis farms as ‘fully organic’.” Semantics aside, this “sun-kissed flower” – a term they coined – is as clean as it gets.

Affordable, high-quality buds notwithstanding, Expendables’ unique team, dynamic and laid-back yet strategic approach to business has made ExpendaFarms a true unicorn among cannabis brands. It may not herald a new age of conscious celebrity lines just yet, but that doesn’t mean brands and the celebs they represent can’t take notes.