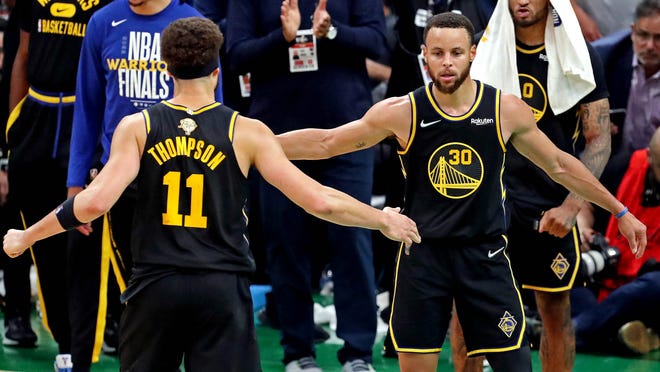 Draymond Green was the center of attention during the NBA Finals, from his on-court antics, which often resulted in technical fouls, to the podcasts he records immediately after games.

Those extracurricular activities didn’t overshadow how rough a series was for Green, and his uneven performances are a huge storyline.

The Golden State Warriors prevailed in Game 4 on Friday to level the series 2-2, but Green continued to struggle on offense and only had on 1-of-7 shooting in the 107-97 win over the Boston Celtics two points.

Green made a name for himself with nine rebounds, eight assists and four steals. However, coach Steve Kerr sat Green out at key moments in the fourth quarter. Green went on the bench 7:32 left and the Celtics led 90-86. He sat nearly four minutes and returned with 3:41 left and the Warriors 97-94.

GAME 4 WIN:Steph Curry even goes from series for 43 points as Warriors

TROLLS:Celtics fans give Draymond an ovation for early trouble

Kerr then switched Green on and off many times in the final minutes, taking him out for offensive possession and trying to get him back on defense.

“You see, because of Boston’s size and athleticism, it’s difficult for him to score in this series, but he’s still affecting the game at a tremendous level,” Kerr said of Green. “And he knows we will do whatever it takes to win. We have many people who can contribute. A lot of people did that tonight and you know we did it. And whatever it takes in Game 5, we’re going to do that.”

Green is averaging 4.3 points in 6-for-26 shooting combined (23.1%) over four games in the Finals. He’s 0-to-9 on 3-pointers and has 17 total points in the series and 19 fouls. Though he also averages 7.3 rebounds and 5.8 assists, the Warriors know Green’s performance isn’t what they’d expect from the former Defensive Player of the Year.

Even Green’s mother, Mary Babers Green, seemed confused by his game and playfully participated in clowning on social media after game 4.

“Please guys stop asking me what’s up with Dray…I don’t know!” Babers Green tweeted Friday night. “Maybe it’s a CLONE! Lmbo WHERE IS THE Draymond that brought us here!! Hmmmm, I’ve never seen that either!”

Green admitted he wasn’t happy about being taken out of the game but insisted he would do whatever it takes to win.

“I’m definitely never thrilled when I get out of a must-win game with seven minutes left in the fourth quarter,” Green said. “I’m not going to sit here and pretend I’m thrilled. I am a competitor.

“But at the end of the day, if that’s what the coach decides, then you roll with it. You know I had to keep my head in the game and whenever I came back in try to make some games. That was just my way of thinking. You know, don’t make too much of it.”

It seems safe to expect a podcast or two before Game 5 in San Francisco on Monday.