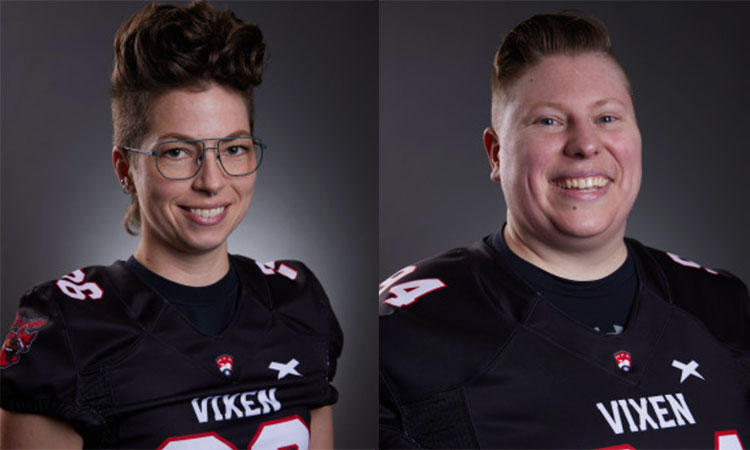 Allyson Klenke ’10 and Caitlin Hill ’12 have different roles to play.

But both College of Saint Benedict graduates will be there on Sunday, July 10 at Tom Benson Hall of Fame Stadium in Canton, Ohio, when the Minnesota Vixen (6-2) defeat the Boston Renegades in the Women’s Football Alliance (8:0) compete National championship game of the pro division.

Kickoff is scheduled for 1 p.m. Central Time and the game will be televised nationally on ESPN2. It’s a repeat of the national title match a year ago when the Renegades defeated the Vixen 42-26.

“Having the game on ESPN2 is really a highlight,” said Klenke, whose team defeated the Cali War 36-30 in the June 25 WFA American Conference Championship game in Edina. “Hopefully it will be a big step forward for our league in terms of growing our viewership and exposure.

“We had the experience of playing (Boston) in the national championship game a year ago, so now we have a better idea of ​​how they play and what to expect. I think our team has really strengthened this year. We had some ups and downs but everyone came together and we are ready for this challenge.”

Klenke, who completed his studies at the CSB with a double degree in art and communication, is in her fifth season as a noseguard for the Vixen, a franchise dating back to 1999, making it the nation’s longest-running continuously running women’s soccer team.

The Paynesville High School graduate, who was a member of the CSB track team, has nine tackles this season – including three by a loss.

“This year has really felt like a real team effort,” said Klenke, who works as a customer service representative at Allianz Life in Minneapolis. “We’ve leaned on every player in our squad at times and everyone has gotten great playing time.”

Hill, who majored in art and biology, will also be on the sidelines of Vixen on Sunday. The defenseman played for the Vixen from 2017-2019 before pausing the 2021 season due to COVID-19 concerns and her marriage to fellow Vixen defensive standout Ace Theissen. The team did not play in 2020 due to the outbreak of the pandemic.

She returned to the field this year but tore an anterior cruciate ligament and meniscus during practice in March and was unable to attend a game.

“That was disappointing,” said Hill, who was the team’s 2019 Defensive Player of the Year. “I was looking forward to getting back out there and in a moment that was over.”

Hill, who received her master’s degree from the University of Minnesota in 2014 and works as a stem cell biologist for Anatomic Inc., a biotech company based in northeast Minneapolis, has remained on the team and serves as an extra pair of eyes on the sidelines for her fellow defense attorneys .

She was also able to cheer on Theissen, who took third place in the team with 37 tackles – 12 of which were defeats.

“It’s been fun to watch (Theissen) perform on the field and see the season they’ve played,” Hill said.

Now both Klenke and Hill said they are ready to help the Vixen bring home a national title from Ohio.

“We know that (Boston) is a great team, but we can’t get too involved in all of that,” said Klenke. “We have great players ourselves. We just have to play our game and take care of what we need.”