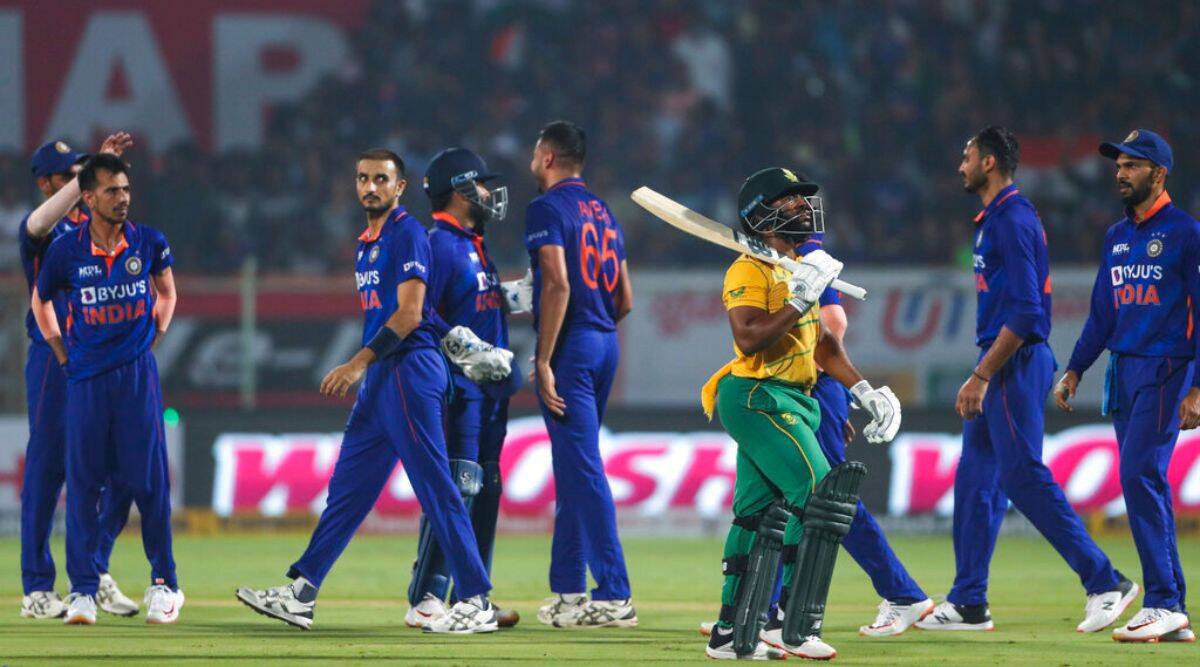 Rishabh Pant lost his third consecutive pitch of the series but his spinners bounced back from two disappointing games in Delhi and Cuttack to plot South Africa’s downfall at Visakhapatnam and India in the five-game T20I series with an all-out win in 48 keep runs alive.

After Pant saw the Indians’ batting falter in the second half of the first innings and the buy the South African spinners made despite a few runs, Pant gave Yuzvendra Chahal and Axar Patel in the first half of the pursuit, respectively three overs . Axar delivered the wicket of South African skipper Temba Bavuma in his first over and Chahal, bowling fast, flat and slippery, sent back Dwaine Pretorius and Rassie van der Dussen.

Just after half-time, Harshal Patel’s well-camouflaged slower spotted the dangerous David Miller. At 71 to 5 after 11 overs in a 180 chase, cuttack hero Heinrich Klaasen had too much to do and not enough partners to share the load.

#TeamIndia Win the 3rd T20I with 48 heats and keep the streak alive.

Chahal and Axar had played 68 in five overs at Cuttack and 66 in six overs in Delhi for a single collective strike in each game. With the spinners barely able to find a foothold at Barabati Stadium, Klaasen was able to create space and use additional cover to hit Chahal almost to the rope. A flight on a tighter line had been comfortably pounded over the deep midwicket.

Raise your hand if you’ve just picked up a wicket 🙋‍♂️🙋‍♂️

But in Visakhapatnam, Tabraiz Shamsi found some grip and turned immediately. During the innings break, Ruturaj Gaikwad told commentators that given the South African spinners were rolling more slowly, the message to their Indian counterparts would be to do the same. And Chahal started that way – tossing up a teaser, getting into Reeza Hendricks and bursting over the right-hander to take a healthy outside edge that proved too big a deviation for Pant to get close.

But for the others, Chahal often pushed it through flat, fast and slippery, though he occasionally threw in the loopy, enticing broad. He still found enough nip in the corridor to outperform Pretorius and van der Dussen.

By the time Miller left, the match was practically decided save for another miracle from Klaasen. But Chahal, who still had one left, came back to take down the man who had previously successfully taken him both home and away, also saying he likes the leg spinner “quite a lot”. Chahal consumed Klaasen the way he devours so many batsmen in T20s, with the inviting wide lure somehow falling out of reach of numerous swishing blades.

Gaikwad, Kishan set it up

After India were asked to bat first again, Ruturaj Gaikwad came off well after a series of failures for his first half century with the national team. Initially, it seemed a pitch that suited Gaikwad’s timing better than Kishan’s power, and South Africa reinforced the Maharashtra batsman’s strengths with pace and poor lines.

There were some beautiful flicked sixes by Gaikwad ahead of Kagiso Rabada and Pretorius and he went after Anrich Nortje with four fours in five deliveries, cutting, charging and cutting with confidence. However, in the same over, Nortje grazed Gaikwad’s grille with a brutal bouncer and could have caught him had the short third man been more vigilant.

India was very lucky that evening; Pant and Hardik Pandya were both dropped shortly after arrival after Kishan’s slice landed inches from an advancing deep point. However, after Gaikwad picked up the momentum, Kishan kept the innings going with his usual mix of sweeps, slogs, slog sweeps and reverse sweeps.

An opening tally of 97 in ten overs seemed to have set India up for a total of over 200. But South Africa, late in hindsight, had warmed up in favor of the slower and harder lengths. After a couple of gentle turning dismissals, Pretorius edged out Kishan and Pant with wide and slow deliveries that got stuck in the pitch. Wayne Parnell nailed the Yorkers to their deaths as India managed just 82 of their last ten overs. However, it would be more than enough for Chahal and co to secure India’s first successful defense of the series.