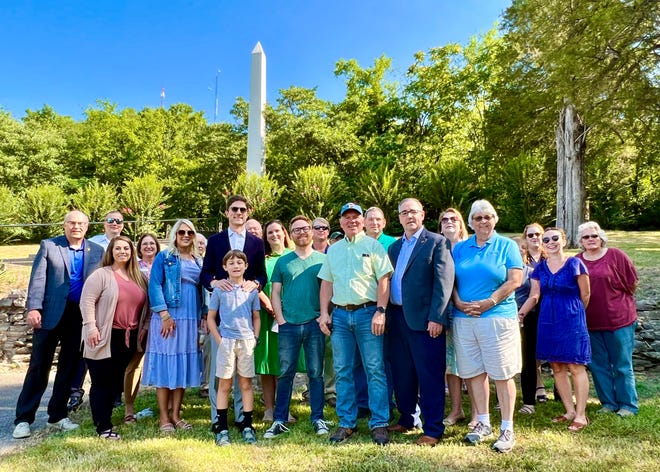 The city’s newest historical marker not only recognizes Colombia’s first official public park, but also pays tribute to one of its many historical figures, Edward Franklin “Pop” Geers, a “nationally famous” harness racer in the late 18th century.

City leaders, along with Conservationist Sarah Elizabeth McLeod of the South Central Tennessee Development District, gathered Thursday morning to unveil the marker and share the park’s history and importance, as well as Geers’ role in the city.

Known for his harness racing skills in the late 19th and early 20th centuries, Tennessee’s Geers rose from humble beginnings to something of a national celebrity. Despite being born in Lebanon, Geers always considered Colombia his homeland.

“Pop set records on horses that had never been equaled before and he’s still valued by the trotting industry,” said McLeod. “I’m honored that we’re here and that we’re doing this.”

As part of her work as a conservationist, McLeod said she is also in the process of writing a book covering the history of Geers, which she hopes to publish sometime in December.

One of Geers’ greatest achievements during his racing career was recording the first mile in under two minutes on his famous Columbia-Ross Napoleon Direct in 1916.

His career of more than 50 years was cut short in 1924 when he died tragically at the age of 73 at the Wheeling, West Virginia racetrack.

Pop Geers Memorial Park, 602 West 7th Street, was dedicated later in 1926 with horsemen and businessmen from around the world erecting an obelisk in his honor.

“We’ve grown a lot over the past 100 years, but this is the first park for the City of Columbia, so right now we’re standing on a little piece of Columbia history,” said Mayor Chaz Molder. “I am pleased that the city has continued this historic marker dedication program. It’s important that we mark the history of our city so we don’t forget it.”

Molder added that in addition to the memorial and marker, Pop Geers Park also has irises planted from the site of the former McDowell Elementary School, which he says is “another way to preserve part of the town’s history.”

He also hopes the marker will attract more people to learn more about its history, the importance of the monument and Geers’ illustrious career as a trotting racer.

“As a kid, I always thought this monument looked like a miniature Washington monument. Hopefully this marker will give West 7th Street more frontage and attract more people,” Molder said. “They will drive by and learn some history and what this marker means to us.”

City manager Tony Massey describes Geers in a city press release as: “He should take to racing what Dale Earnhardt was to NASCAR.”

“It’s great that we’re here today to honor this guy,” said Massey. “It is certainly fitting to pay tribute to one of Colombia’s most famous citizens.”