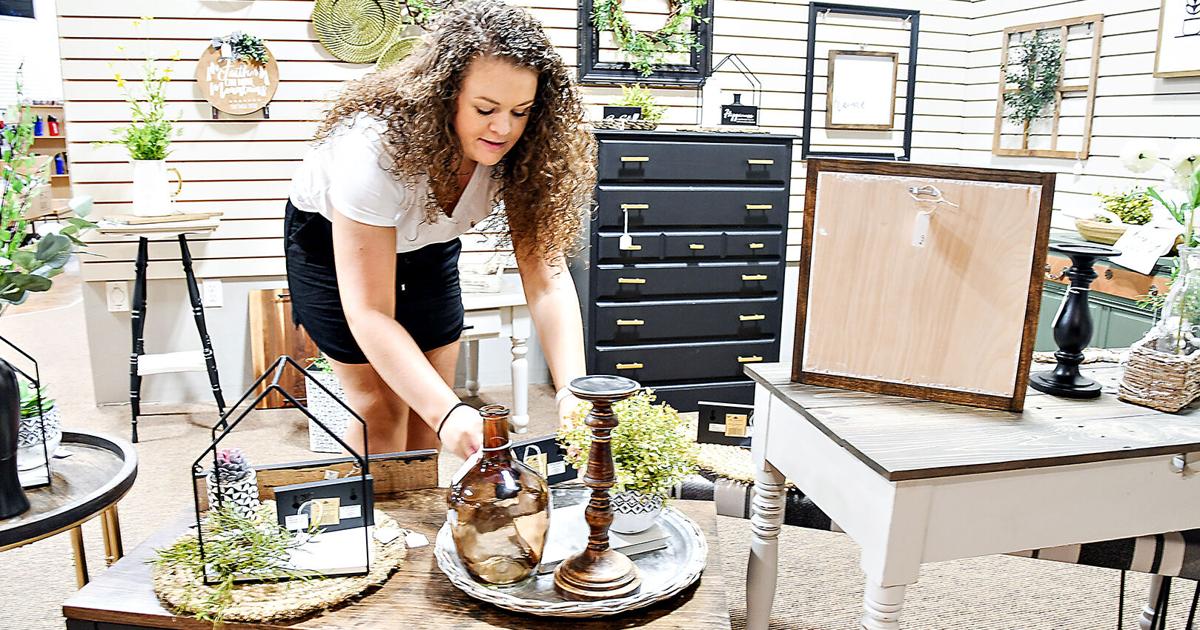 Handmade home accessories, repurposed furniture, antique toys and jewelry are just a few of the items to be found at the seven vendors currently on display, and there’s room for more, said Elise Glade, owner of Center Sports.

“After we closed our retail area, we originally talked about subletting part of the building, but that got really difficult when we thought about opening hours and access to the building, especially because of the amenities in the building,” Glade said. “Offering a space for sellers — people selling from their homes or garages or online who want a physical space for their items — seemed like a good way to use the building without having to adjust how often the front door is opened is.”

Center Sports continues to offer screen printing and embroidery, as well as athletic and academic trophies, medals, plaques, ribbons and more. The new branch uses the sales area that was closed in February.

The name of the new office reflects the history and location important to the company. Center Sports opened in 1992 at the Sioux Center.

“We didn’t want to lose our Center Sports name because we’re still providing services and people know where to find us by saying that name,” Glade said. “Finding an entirely new name for the stall area could make it harder to promote what it is and where it is located.”

Appointments can be made Monday to Wednesday to visit Center Sports Antiques & More, or customers can stop by to browse the items on display in the air-conditioned building Thursday 3pm-7pm, Friday 11pm-5pm, Saturday 9am-1pm.

Part of the idea for Center Sports Antiques & More came from Glade’s husband Mike, who is interested in antique collecting.

“He and I like going to different venues that have a variety of vendors like this, but we felt like there wasn’t anything like it in the community,” she said. “It’s a really great location in the Sioux Center. Now to have something different that gets people through the door is exciting.”

Maybe it could even bring others – vendors or people looking for a specific vendor – into the community. The owner of 46Ten, who makes refurbished furniture and home accessories, hails from rural Ireton. Other vendors include Re-Created by Keri Hoogland of the Sioux Center, A Dilly Day by Pam Rensink of the Sioux Center, and K&E Beads by Kelly Van Sickle of Humboldt and Elaine Mooney of Le Mars.

There’s also room for more vendors, Glade said, noting that they charge a rent per square foot of occupied space and a percentage of an item’s sale.

Providers do not have to be local or from the community.

“As long as they have everything tagged, they can set up their space and we’ll man the building and review the items sold,” Glade said. “We can even top up their space if they feel comfortable leaving some inventory. We have some memory for this possibility.”

Glade is particularly keen for some bakers to get involved.

“I’d love for those interested in making cupcakes, cakes and other treats to possibly take turns providing their baked goods throughout the month,” Glade said. “That would increase the variety.”

Glade looks forward to seeing the number of vendors grow and notes that the Sports Antiques and More center may have extended hours as more vendors are added.