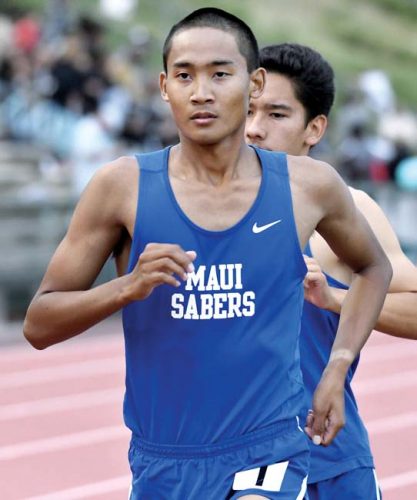 Even as they picked up The Maui News’ Athlete of the Year honors for both girls and boys, Seabury Hall’s Kaylee Volner and Maui High School’s Kaimana Cantere still didn’t realize they were state champions.

The seniors have been non-stop for the past few weeks between the Maui Interscholastic League track and field championships, the Island Movers state championships on Oahu, and then their high school graduations.

A four-time MIL champion that included a challenging win in the long- and medium-distance races — the 400, 800, 1,500 and 3,000 meters — as well as a state gold and bronze medalist in the 800 and 1,500 meters, respectively, Cantere was named by The Maui News to Voted Boys Athlete of the Year.

“I’ve come far. I didn’t have that much experience or knowledge until now, all the hard work I’ve been through. It is a good feeling”, Cantere spoke about the honor last month, just two days after his inauguration. “It’s incredible.”

Though there have been many star performances from MIL Boy athletes this season – including Baldwin’s Joseph Randolph, three-time MIL champion (100, 200, long jump) and 100-meter state champion, and Justin Kahalewai of the Bears, who earned one a string of MIL runners-up and a first-place finish, as well as a state gold in the 110 hurdles – Cantere stood out from the crowd and added more honors to the state cross-country championship he won in December.

That’s what Volner said last month “it really still hasn’t” still felt real. After collecting three individual victories at the MIL championships (800, 1,500 and 3,000) and then becoming a state champion in the 3,000 – the only girls’ individual state champion among Maui’s track and field athletes – Volner and a silver medalist in the 1,500, Volner was the clear choice for the Girl Athlete of the Year Award.

“It definitely means a lot. There are so many great athletes in MIL who have really shown themselves with MIL champions and also with states and to receive that honor I’m just so grateful for everything that’s happened this season.” said Volner. “It’s a great way to end my high school career as well as my senior season.”

The pair of Track AOYs didn’t know what to expect this year considering they had both not competed in a full track season since their junior years due to the COVID-19 pandemic.

“Going in I was definitely more confident and hungry for what I wanted to achieve with my goals and more importantly I wanted to enjoy the moment because I knew it was my last season and I wanted to create memories with all my teammates and my trainers said Volner. “One thing I will definitely miss is the community we had for cross country and track because everyone is always so nice to each other and cheering each other on, even though it’s kind of a competitive environment we still get along really well, like from the different schools”.

Though a lot of time and experience was lost, Cantere said he learned through tough training schedules and exercises to motivate himself and listen to his body “Mind over matter.”

“My mind was set on a goal that has done well in states, and I’ve learned I can achieve those goals that many people thought were impossible.” he said. “Some people set their standards as low as, ‘Oh, I want to finish third or fifth,’ but I wanted more than that and with the work I put in and the help of my coaches, I got it.”

Still, the feeling remains “inexplicable to me”

“I am speechless when I look back on what I have achieved this year”, he added. “The moment feels like yesterday, you know, competing against the best in the state and crossing the line is just a much bigger feeling. … It blows my mind. Just seeing the other competition is what always drives me, the thrill, that’s a completely different feeling – a really good one.”

Cantere said he plans to take a year off while he works and decides on college, but in the meantime he has some summer racing on his mind. He and former Sabers teammate Galen Okamoto planned to compete in the two-person relay of the Kahakuloa Half Marathon this past weekend.

Cantere also plans to travel to New York City for the USATF Youth National Track & Field Championship later this month. He’s signed up to compete in the 800, 1,500, 1,600 relays and 2,000 steeplechase events, which is quite something “I’ve always wanted to try” he said.

This summer, Volner said, she’ll be preparing for college cross country at Santa Clara University by training with former Spartans teammates Chloe Gangnath and Kallalei Ryden, both of whom run in college and are home to Maui for a few weeks .

“I’m definitely looking forward to the new opportunities that are coming for me (as a collegiate athlete) as well as some of the best competition in the country because here on Maui we only get to race a few different places each year, but I’m excited in college I’m looking forward to hopefully being able to travel every weekend and being part of the travel team, which will be really fun.” She said. “I will definitely miss coach Bobby (Grossman) the most. We have so many memories together and ending the season with a state title really meant a lot to us and he’s been a part of my life for five years now so it’s definitely going to be hard to pull away from his training. ”

* Dakota Grossman can be reached at [email protected]


EDITOR’S NOTE: The Sports Bulletin Board is published weekly in The Maui News. To send an announcement, send an email …