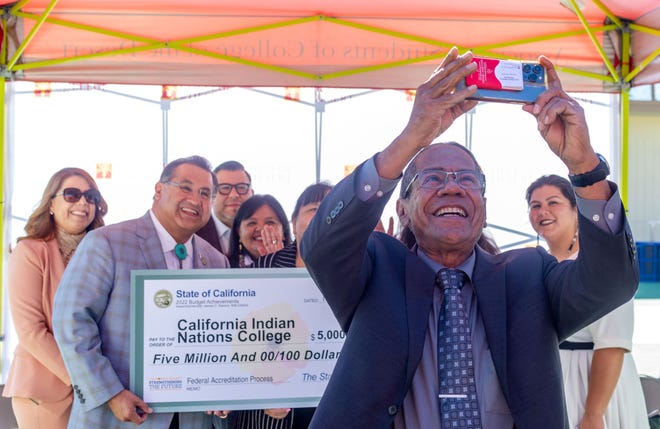 CINC seeks to become the first federally accredited tribal college in California in nearly two decades. CINC President and CEO Celeste Townsend said the school will use the money to advance its planning process toward that goal, which could be achieved in several years.

Accreditation would not only ensure the credibility of CINC degrees with other institutions and employers, but it would also open avenues for the community college to receive federal funding, Townsend said.

CINC was chartered by the Twenty-Nine Palms Band of Mission Indians in 2017 and currently depends on tribal funding to cover its operating costs.

Over the past year, the school has doubled in size to over 80 students and 10 staff representing over 50 tribes.

Currently, CINC does not have a stand-alone campus and relies on a partnership with College of the Desert to share some of its facilities.

Leaders emphasized the importance of California Indians having greater access to higher education and greater representation as teachers and professors at all levels, in addition to their own self-contained college where tribal cultures are celebrated and studied.

“A lot of people tried to take away our education and our culture, but they didn’t succeed,” Ramos said, referring to a history of marginalization.

As a member of the Serrano/Cahuilla tribe, Ramos is the first California Indian to be elected to the California State Assembly.

“Indians being able to have our own college will start pushing us forward in areas that others might not see as important in our community,” he added.

“We need to be able to teach our people about our history, our language, our culture and our spirituality in a safe space where they feel welcome,” Rodriguez said.

His college and other tribal colleges currently offer tribal courses through memorandums of understanding with accredited schools, but he warned that such agreements can be rescinded when new trustees take office.

COD Superintendent/Chair Martha Garcia noted that statewide, about half of Indigenous high school students go on to college, compared to a statewide average of 63 percent.

She added that fewer than one in six Native Americans graduate from college. And, during the pandemic, Native American students have dropped out of California community colleges at higher rates than most other student groups.

Townsend called the state budget allocation “just the start” for his school. She explained that the road to federal accreditation is long and complex, but assured that the college is on track to achieve its goals and will likely have 200 students by next year.

Jonathan Horwitz covers education for The Desert Sun. Contact him at [email protected] or @Writes_Jonathan.