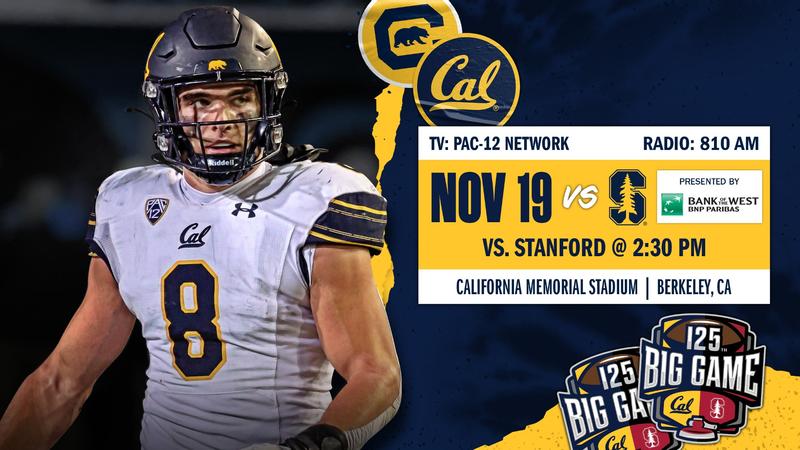 The first 10,000 fans through the doors receive a replica ax

BERKELEY — California returns home to host Stanford in the 125th Big Game on Saturday, November 19 at 2:30 p.m. at California Memorial Stadium. The game will air on the Pac-12 Network with Roxy Bernstein on play-by-play and Lincoln Kennedy providing analysis. The first 10,000 fans through the doors on Saturday will receive a commemorative replica of the axe.

ABOUT THE SERIES
– This will be the 125th meeting ever between California and Stanford with the first game being played on March 19, 1892, at a field on the corner of Haight and Stanyan streets in San Francisco.
– The Cardinal led the series 65-48-11, but the Bears have won two of the last three meetings, including a 41-11 demolition of Stanford in their last meeting at The Farm last season, the biggest margin of victory of Cal against the Cardinal since a 41-6 win at Berkeley in 2004.

BEAR VS CARDINAL
– The Bears beat the Cardinal, 41-11, when they last met Nov. 20, 2021 at Stanford Stadium. Cal’s offense recorded three plays for at least 75 yards, including the longest pass in Big Game history, an 84-yard touchdown pass from Chase Garbers to Trevon Clark in the second quarter. Marcel Dancy added a 76-yard touchdown run and Christopher Brooks snapped a 75-yard rush as Cal opened up a 27-3 lead with 1:26 left in the third quarter. The Bears’ total 636 yards was a Big Game record.
– Cal brought The Ax back to Berkeley for the first time in 10 years in 2019, beating Stanford 24-20, at The Farm behind a game-winning 16-yard touchdown run with 1:16 left from quarterback Chase Garbers. Trailing 20-17 with 2:23 left after a Cardinal field goal, the Bears completed a 75-yard drive capped by the Garbers’ run to the left corner of the end zone. Garbers completed 20 of 30 passes for 285 yards and a touchdown with 89 rushing yards and the game-winning score.