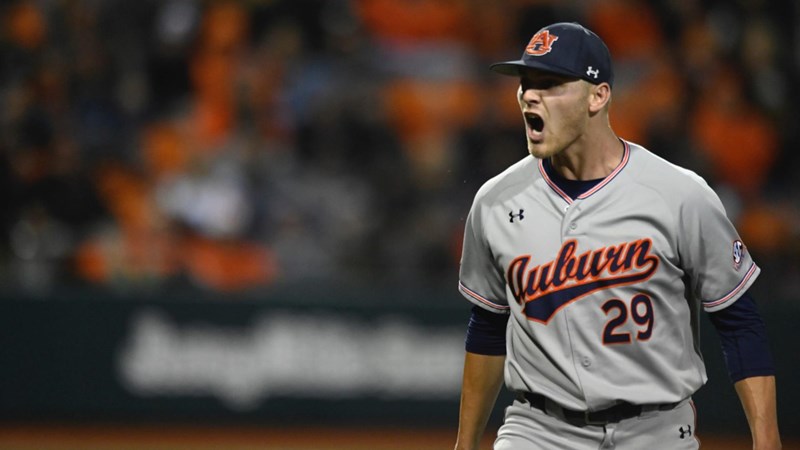 in the state of Oregon

CORVALLIS, Ore.— Masterful relief pitching and opportunistic offense propelled No. 14 Auburn to a 7-5 win over No. 3 Oregon State in the first game of their Super Regional at Goss Stadium on Saturday.

“Tommy Shehan and Carson Skipper were tonight’s story,” head coach Auburn ButchThompson said. “Our offense and our defense are just competing and interested in every shot.”

Burkhalter threw in ninth place to record his 14th save, which put him in third place in single-season history. The junior righty notched a pair of strikeouts against the heart of the Oregon State Order while allowing a run to two hits.

“I knew it was a big place. I thought I had a good handle on all my places,” Sheehan said. “I wanted to be of great help to this team. It is an honor to hear your name called.”

“It’s really fun playing behind them,” said Auburn shortstop Brody Moore, who put the Tigers on pace with three goals. “They hit the strike zone. They get ground balls, they fly balls, they make us work and they have their backs.”

After 51 runs in the Regionalliga last week, the Tigers scored in each of the first three innings and four of the top five.

To Cole Foster pulled a one time walk, Sonny DiChiara drilled a two-run home run down right center, his 21st home run of the season and fifth in six games, for an early 2-0 lead by Auburn.

John Armstrong relieved Pursue bright and finished OSU’s leadoff batsman with a pop for DiChiara to end the inning, with three runners stranded.

Auburn tied the score at the top of the second time Nate LaRue singled to score Moore, and Mike Bellos RBI groundout plated Kason Howell to a 4:4 draw.

“I thought to get two more runs would be huge,” Thompson said. “I thought our offense was instrumental.”

The Tigers took a 5-4 lead in the third when Moore’s sacrificial fly scored for Foster, who led with a single, stealing second and moving to third on walks to Bobby Peirce and Brooke Carlson.

Peirce extended Auburn’s lead to 6-4 with a towering solo homer to the left that carried away the fifth.

Auburn added an insurance run in game eight after Bello took the lead with a single, moved up to third through a throwing error and scored on a groundout to put the Tigers 7-4 ahead.

A small but vocal contingent of Auburn fans, including the Tigers track team, made their presence felt among the 4,112 in attendance, the third largest crowd in Goss Stadium history.

With Auburn (41-19) still needing a win to advance to the College World Series, the Tigers and Beavers (47-17) play game two Sunday at 9 p.m. CT on ESPN2 and the Auburn Sports Network.

“I like our position, but we’re obviously not done yet,” Moore said. “We have to show up and compete tomorrow, sticking to the same approaches we’ve been working on all week.”