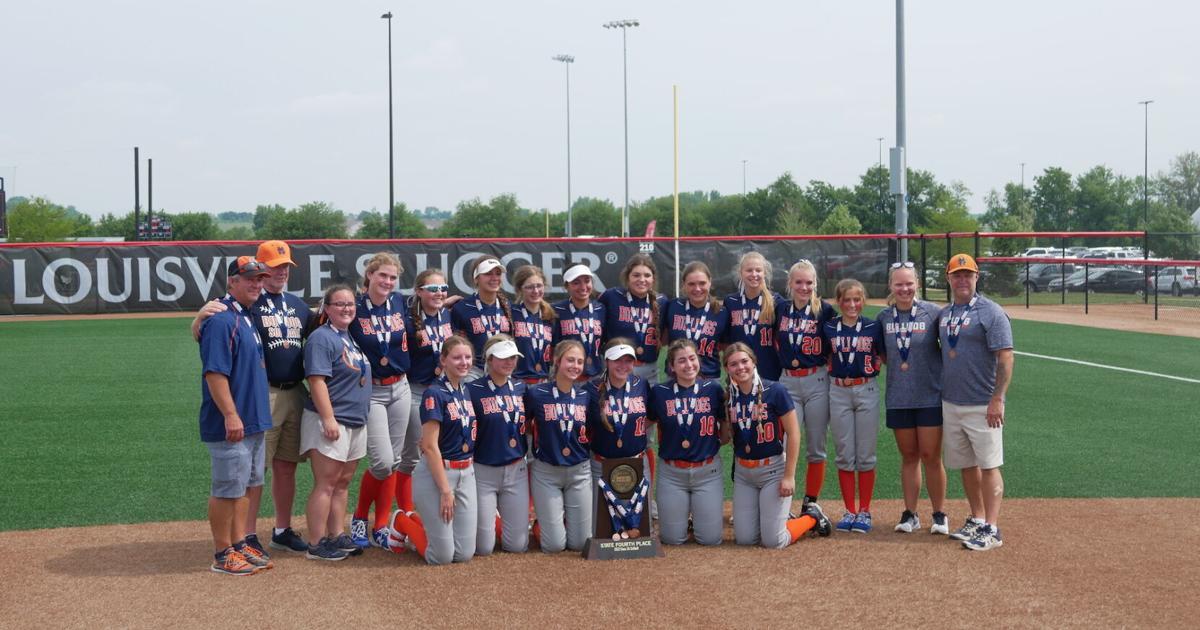 PEORIA — Tears were shed by most, if not all, of this season’s Mahomet Seymour softball athletes late Saturday morning.

Some came from a place of frustration.

The Bulldogs found themselves on the wrong end of a one-hitter for the second straight day, losing a 1-0 decision to Antioch in the third-place game of the Class 3A State Tournament at the Louisville Slugger Sports Complex.

Many more of those tears flowed because the result marked the end of this MS squad’s time together in a competitive capacity.

“That’s what we said. It’s not even the loss. It’s the fact that we’re done,” said senior first baseman Abby Akers. “We will no longer train with this team. … I don’t see these girls every day. I can’t be happy every day and jump around and dance with them.

The Bulldogs (27-7) left Peoria with the program’s first-ever State Cup, though their offense fell silent in Friday’s semifinals against St. Ignatius and in Saturday’s consolation match with the Sequoits (30-4).

“It’s so great,” senior pitcher Karley Yergler said. “I’m so glad we got to experience that. It was so amazing and I’m so happy that I got to do this with all these girls.”

Yergler put in another solid performance in the circle to end her Bulldogs career. The right-hander threw a three-hitter the entire game with three walks and nine strikeouts.

The only blemish against Yergler came in the third inning. Antioch senior Sophia Shaffer drew a leadoff walk, advanced to second base with a sacrificial bunt, and grounded out to third base.

“We played great defensive games. Karley put up another great game,” said Heinold, the Bulldogs’ freshman year leader. “We just couldn’t get any traction. I saw the same At bats we saw (Friday). Every single batter felt like they were trying to win the game for their team with an at-bat.”

After making the finals on offense in Friday’s loss, Granadino stayed in the circle on the deck as Schuler defeated Cortez to cap Saturday’s affair.

Granadino quickly crouched down and was comforted by teammates.

“Right now I’m mostly sad just because I wanted to come in here and try to win everything,” said Granadino. “Our batting, we were just so tense. Any person who was ready to hit felt like they had to be the hero.”

Junior player-designate Jenna Wade came close to base against Schuler in the third inning and slowly knocked a ground ball down the right side of the infield. But Sequoit’s junior second baseman Emily Brecht showed long reach, setting up the ball in flat right field and recording the out.

Instead, it was once again freshman second baseman Madi White who came up for the MS offense.

MS’ No. 9 hitter, White hit a single in the sixth inning on Friday to break St. Ignatius senior Ellie Giles’ no-hitter against the Bulldogs.

Less than 24 hours later, the left-hander who hit White threw a grounder towards opposite field. The 5-foot athlete hurtled down the line and hit a throw at first base, finishing 2 for 4 overall during an otherwise difficult state experience for the MS offense.

“With the underclassmen defending and the bats defending, I’m sure they will continue to do well next year,” Akers said. “I’m positive.”

Until then, Heinold is also looking forward to the future of his program. Despite the disappointment of a 2-0 ledger in the Bulldogs’ first state appearance, Heinold believes the participation will pay off down the road.

“This will be a big plus for our program,” said Heinold. “Hopefully the Mahomet youth will be thinking about softball by the time we wrap up the summer and hopefully (it will) get more of our youth playing fastpitch. I think that could really help move that forward.”

Dozens of community members spread out across one of the turf fields at the Louisville Slugger Sports Complex for a post-game celebration.

They delivered optimistic messages to the athletes, preceded by MS assistant coach Derrick Odle, who told some of the girls, “That’s the fun part,” before receiving their state medals and trophies.

“We’re not a small city, but we’re not a super-big city either,” Akers said. “To see so many people coming out and supporting every game since (the) regional championship is insane. We didn’t think we would get so much support and we were so happy everyone came. It really added to our energy throughout the postseason.”

However, all the words of encouragement couldn’t hide certain realities the Bulldogs were facing.

“I’m really sad because the seniors are leaving, and I have a really good connection with Karley and Abby and all the seniors,” Granadino said. “It’s just going to be really hard for me to go through the season next year without her by my side.”

Having those seven innings contested with a state cup on the line is an experience they could only cherish.

“All the seniors talked before the game and said even if we won the game, we would cry afterwards,” Yergler said. “We’ve all played together since we were very young. This is our last game together, it’s very sad.

“Of course we are all very emotional. But I’m just glad I got to play with them until the last day of softball season.”