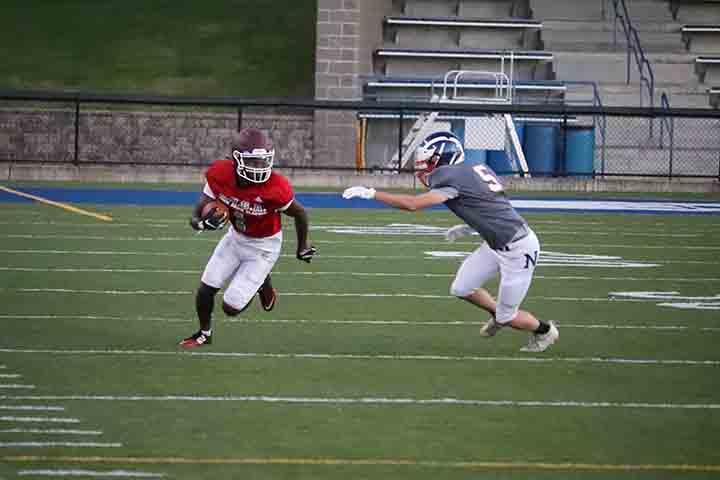 With his freshman year in Valparaiso approaching in the fall, Hightower wanted to stay healthy so he could hit the ground running on campus in the coming months.

But in the end, the opportunity to compete one last time at the high school level in the Jack Arvin Classic at Hubbard Memorial Stadium on Thursday was an opportunity Hightower couldn’t turn down.

“It meant a lot to be chosen” said Hightower. “I just wanted to get back on the field one more time in a high school atmosphere just to see how I feel again. It was good to get back out there and see if I still got it.

Playing both ways, Hightower made his impact felt on the Mahoning County All-Star team’s game.

At cornerback, Hightower sacked Trumbull quarterback and Mathews product Isaiah Munno and forced a fumble that was picked up by Fitch’s Tyree Mitchell and returned for a Mahoning touchdown that ended the game before halftime.

On offense, Hightower caught two deep passes from Mahoning quarterback and Crestview star Anthony Cusick, including a spectacular jump ball on a 30-yard touchdown catch in the third quarter.

With the Jack Arvin Classic and Boardman athletics season now in the rearview mirror following last weekend’s state track meet, Hightower can now focus on looking forward to Valparaiso, where he will play football and continue to run on the track.

Hightower said the Beacons’ football coaches first contacted him at the start of his senior season last fall. From there he developed a relationship with the coaching staff and then went on his official visit. After that it was a clear decision.

“I knew I wanted to go there” said Hightower.

However, the opportunity to become a dual athlete and career only arose later.

“The athletics coach emailed me and we talked about it and then I decided to play both football and athletics.” said Hightower. “I’ve had the opportunity to run track and field and play football – two things I love to do. So I just went out there and made the best of what I could.”

Football is Hightower’s primary sport and he will continue to play cornerback and receiver for the Beacons as he did for the Spartans.

But the running track will help him stay in football shape during the offseason, just like he did at Boardman.

“I use the track to stay in shape and build up my speed for football,” said Hightower. “When you play in Division I, there are a lot of fast people. I know I’m a smaller guy so I have to offer something the bigger guys don’t have, so I just use my speed and keep getting faster.”