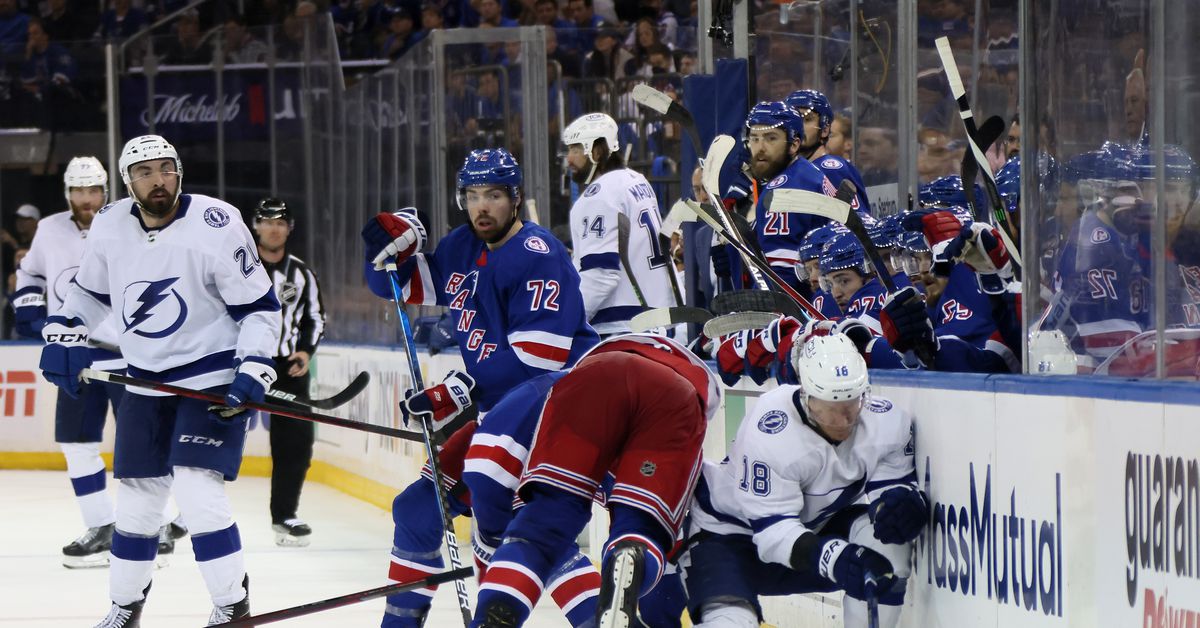 From Jacob Trouba’s attempt to fly the forearm to the post-whistle brawl to an alleged spitting incident, the Tampa Bay Lightning and New York Rangers gave the league and the Department of Player Safety a few things they found in game five in the should keep an eye. However, up to this morning nothing has warranted additional discipline in the form of fines or suspensions so expect everyone on the ice today.

Most notable was an attempted check by Rangers defender Jacob Trouba on Ondrej Palat. From the TV angle, it looked like he was leading with his forearm/elbow before Palat dodged:

If there had been contact, he’d probably meet with the league office, but there’s not much history of the DoPS doing anything regarding attempted elbow strikes (granted, they don’t do much with elbows connecting either). Trouba has had some questionable hits in the playoffs so far this season and this would be another to add to the ledger.

The final whistle of game five was highlighted by a couple of wrestling matches and fights between the two teams, which resulted in gross penalties for Erik Cernak and Ryan Strome, a slashing penalty for Adam Fox, and some fighting majors for Steven Stamkos and Alexis Lafreniere. Occasionally the league issues fines for such post-game shenanigans, particularly in heated streaks, but it looks like the players involved are skipping the fines.

Speaking of Stamkos and Lafreniere, at the end of their altercation, some Rangers fans seem to think the captain may have loogied Lafreniere.

I can understand why they might think based on Stamkos’ head jerk, but the lack of an outraged reaction from Laf or additional discipline with so many people right in the area leads me to believe the move was caused by the Rangers forward at Stamkos’ tug jersey. But, hey, congratulations on causing a little buzz on social media!

It wasn’t a pretty gate, but it was a custom Lightning gate. A screenshot breakdown of Ondrej Palat’s goal in game five.

After game five, an altercation broke out between a Rangers fan and a Lightning fan. The Rangers fan in question has now been banned from MSG events for life.

If you’ve ever wondered what Steven Stamkos’ career fight card looks like, here it is:

The last time Stamkos fought in Tampa, McDavid had not been drafted.

The Syracuse Crunch suspended their captain for two more years, bringing some stability to an AHL team that is likely to see an influx of young talent this season. Dumont is coming off a career year in which he scored 62 points [30 goals, 32 assists] in 75 games. The Crunch also signed defenseman Tyson Feist to a one-year deal. The 21-year-old Feist played 65 games for the Kelowna Rockets last season, scoring 15 goals and providing 24 assists.

We’ll get to that later in the preview, but the Lightning know that the 4th win is the toughest in a streak. They will work hard to defeat the Rangers at home tonight and secure their third straight trip to the Stanley Cup Finals.

He’s quietly worked his way up to the top scorer list for the Lightning in the postseason. That’s exactly what he does when the Lightning needs a little nudge.

Lightning brought Rangers to the brink of elimination [The Athletic]

Speaking of Palat, he’s the only player in NHL history to score two game-winning goals in the same series. Maybe the three of him are going tonight?

Ben Bishop’s contract goes to Buffalo [Die by the Blade]

The Dallas Stars are taking some salary and the Buffalo Sabers are getting some help making it to the salary cap level. Bishop is unlikely to compete due to a lower body injury. The move helps both teams as Dallas now has a little more leeway to lock down some of their younger players.

The stories behind the Goal songs for Rangers and Lightning [ESPN]

The use of “Goons” coincided with an historic winning streak for the Lightning, including back-to-back Stanley Cups. [Nick Brown, lead singer of the band Nova] couldn’t help but notice.

“It made me a fan. Before they started using my song, they didn’t have the records they have. I attribute it all to the song,” he said, laughing. “And since hockey teams and fans are superstitious, they probably won’t change that any time soon.”