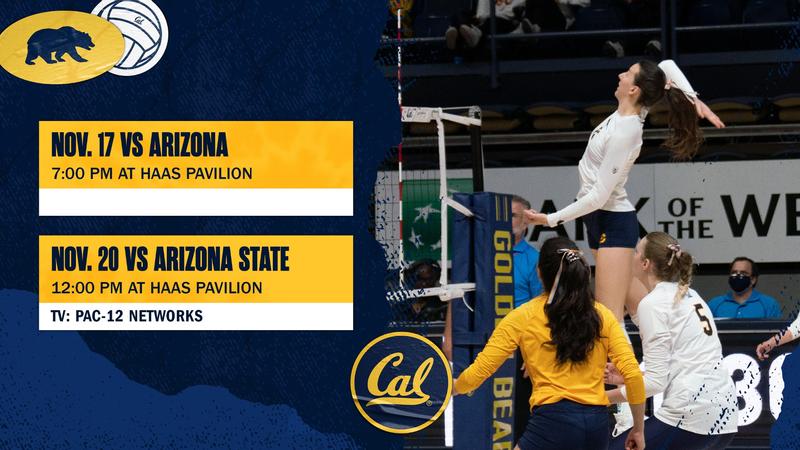 Cal rides the momentum at Haas

BERKELEY- California Volleyball (7-19, 0-16 Pac-12) hopes to continue its upward trajectory this week as the team returns to the Haas Pavilion for its final home weekend of the season, hosting Arizona ( 14-13, 4-12) and Arizona State (11-17, 5-11). The Bears have appeared in three consecutive five-set games and look to build on that competitive momentum in the final four games of the season as they seek their first conference win since the spring of 2021.

Arizona currently leads the all-time series against Cal, 46-27. The Wildcats swept the Bears, 3-0, when they last met Oct. 16; however, they are only 2-7 as a visiting team this season. Senior Zyanna Fellows leads Arizona with 132.0 total blocks, 21st in the NCAA, while classmate Kamaile Hiapo leads the conference with 411 total digs.

For their part, the Sun Devils also hold the advantage in their all-time series against Cal, 39-34. The Bears suffered a 3-0 sweep at the hands of ASU on October 14, but the visitors are currently on a five-game losing streak ahead of their game against No. 8 Stanford, scheduled three days before heading to Berkeley. . Senior Ivan Isanovic has been ASU’s standout player this season, leading the team with 366 kills and 417.5 points. She ranks 59e in the country with 1065 attacks in total.


THE GLORY OF GROTE
Lydia Cave made Cal history in November, posting 28 kills against UCLA (Nov. 10) — the most by a Golden Bear in a single game since 2010 — and matched that total two days later against USC. In that last game, she recorded 94 kills for the most in a game of all time by any Cal player. She currently leads the Bears with 354 kills, 409.0 points and 4.26 points per set, the last of which ranks 89th in the nation.


TEAM LEADERS
Grote isn’t the only Golden Bear to post an impressive 2002 season for Cal. Junior Tara DeSa currently ranks fourth in the Pac-12 in both total digs (340) and digs per set (3.95), while freshman Mikayla Hayden also made an impressive impact on his Golden Bear debut, leading the team with 88.0 total blocks (6th most in the Pac-12) and 1.06 blocks per set (19th best rookie in the NCAA).


USA VOLLEYBALL TAKES ADVICE
junior Lydia Cave and Leah Schmidt participated in the 2022 U.S. National Volleyball Team Open Program Feb. 25-27, scoring invites after stellar sophomore seasons. Grote’s 2021 campaign included a 21-game winning streak (vs. Utah, Oct. 17) and a 15-win, .344 hitting percentage outing against Washington State (Nov. 11). Schmidt, meanwhile, was named to the 2021 All-Tulane Tournament Team and went on to record the team’s third-most wins (200) during the season as one of the players. Cal’s most prolific.


MAEDER BRAND
With 720 total assists and 10 double-doubles in the 2022 season so far, the second Annalea Maeder topped her stellar freshman campaign with rooms to spare, in which she led the Bears with 701 assists and 8 double-doubles. Entering the 2022 season, she recorded a career-high 52 assists and 14 digs in the Bears’ Sept. 2 win over Northern Arizona, as well as an outing of 51 assists and 14 digs. against UC Davis on Sept. 17 who put up more than 300 assists on the season and 1,000 in his college career. Most recently, Maeder posted 50 assists and 14 digs against Oregon State (Sept. 23) and posted 51 assists against UCLA (Nov. 10). Cal Volley’s only international student-athlete is also a star in the classroom, intending to major in environmental molecular biology, and participates in a student-run business consulting club whose clients include various Fortune 500 companies nationwide.


FIRST FOUR
This year, Cal is bringing in four highly touted prospects from across the country to help strengthen his team. medium blocker Mikayla Hayden (Buford, GA) was one of Georgia State’s top high school players, posting over 1,000 career wins in addition to 2 state championships and multiple all-region nods and all counties. Center Blocker Companion Sophie Scott (Portland, Oregon) worked her way to multiple state and all-league teams while an outside hitter Peyton DeJardin (Pasadena, Calif.) achieved third-team All-American status in 2021. Setter Nathalie Lau (San Francisco) rounds out the group, following a season where it earned a spot on the All-America Watch List and first-team All-WCAL.