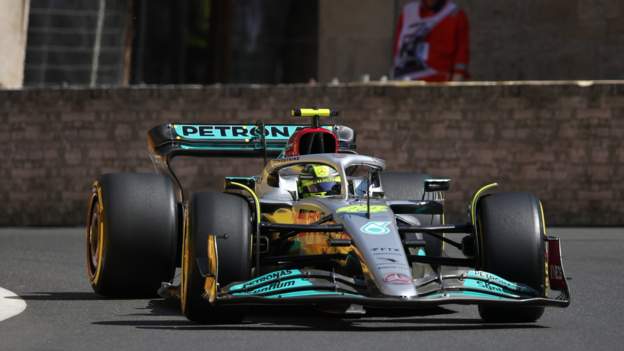 Lewis Hamilton was “a bit sore” after his Mercedes struggled with straight jumps during Friday practice at the Azerbaijan Grand Prix.

“I’m fine,” he said after finishing the day in 12th place. “We’re getting some serious speeds at the end of the straight and there’s a lot of bouncing.”

“I don’t think it’s right to go like this for the next four years or whatever we have,” Russell said.

“Talks will be necessary because everyone is in the same boat.”

Bobbing on the straights – caused by a disruption in airflow in the car’s underbody – has affected most teams to some extent this year after new rules were introduced aimed at closing the field and making overtaking easier.

These have changed the aerodynamics of the cars and led to the impact problem that Mercedes struggles with more than most.

The world champions hoped they could get a grip on it with some changes made two races ago for the Spanish Grand Prix, but it’s returned to Baku’s long pit straight this weekend, which has a series of kinks that were taken at full throttle.

Russell, a director of the Grand Prix Drivers’ Association, said: “Now the car is driving so close to the ground, it’s crazy through these high-speed corners.

“The car has bottomed out and I think it’s the same for everyone and it’s really not comfortable to drive. I don’t know what the future holds for this era of cars, but I can’t imagine we’ll be able to do that.” [continue like this].”

Both Ferraris also seemed to struggle with jumping on the straights.

No other driver complained as much as the Mercedes duo, although Ferrari’s Carlos Sainz admitted he too was struggling with the problem known as the ‘porpoise’.

Sainz said: “That’s certainly something I’m investigating because for some reason I was struggling a lot today with this phenomenon that hasn’t been there in the last couple of races and was looking particularly bad on my side of the pits.

“That’s something I need to discuss with the engineers. It took some confidence off of me on the straights and under braking.”

F1 chief executive Ross Brawn – who was instrumental in introducing the new rules which have changed the way cars’ aerodynamics work this year with the aim of closing the field and making overtaking easier – has previously dismissed similar comments from Russell , who said he was only interested in the thoughts of the drivers at the front of the field.

Following changes to the F1 structure, the team under Brawn that developed the rules has been reassigned to work for the governing body, the FIA.

Russell was the fastest Mercedes driver in seventh place and 1.3s behind Ferrari’s pacesetter Charles Leclerc, with Hamilton a further 0.3s behind.

Hamilton said: “We tried something experimental on my car and it didn’t feel great to be honest. But at least we tried and got data about it. We’ll go through it and hopefully tomorrow we’ll probably come back to what we’ve changed. 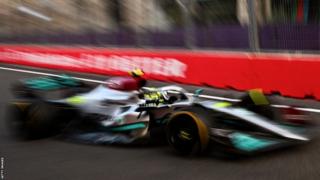 Lewis Hamilton appeared to be struggling in his Mercedes

Leclerc said the nature of the sessions made it difficult to understand the true performance picture.

“I think it will [a hard fight at the top]’ said Leclerc. “We’ve improved quite a bit from P1 to P2, but there’s one more step we need to take tomorrow.

“I also feel like nobody really put in a lap in P2 – neither did we, but Max and Carlos haven’t really improved on the soft tracks so there are still quite a few question marks.

“The positive to take away today is that the deterioration was good and the race pace was very strong so that’s good.”

Leclerc has seen a 46-point lead over Verstappen turn into a nine-point deficit after three races this season following four straight Red Bull wins and a string of problems for Ferrari.

But he said he believes he can regain the advantage as the season progresses.

“If we do everything perfectly, I am confident that we will make it [the lead] back at one point,” Leclerc said.

In terms of race pace, Ferrari and Red Bull looked close together in Baku.

Red Bull had viewed the team as the team to beat in the opening session, when Perez was fastest and when he and Verstappen were significantly quicker on the straights – a key factor at a track they’ve been at for so long and overtaking is relatively easy.

But Ferrari’s deficit on the straights narrowed in the second session and Leclerc resumed his usual one-lap pacemaker position this season.

Verstappen took to the track late at the start of the second session as Red Bull repaired his rear wing after it wobbled with the DRS overtaking aid open in the first session.

Later, his qualifying simulation runs were disrupted by traffic. And he only managed to complete two laps in race trim at the end of the session.

Still, Perez appeared to be the more comfortable Red Bull driver during the day, as Verstappen complained of understeer in the first session and then seemed to struggle with a loose rear end early in the second.

As such, Perez seems to be continuing his strong form following his Monaco win last time out.

Perez said: “It was a good start to the day, P2 didn’t go as well as we would have liked. I think we probably took some wrong directions, or we just did some research and can’t see our problems.

“But we have the data from both tires on the long runs. Hopefully we can pull that all together for qualifying. I’m confident about that.”