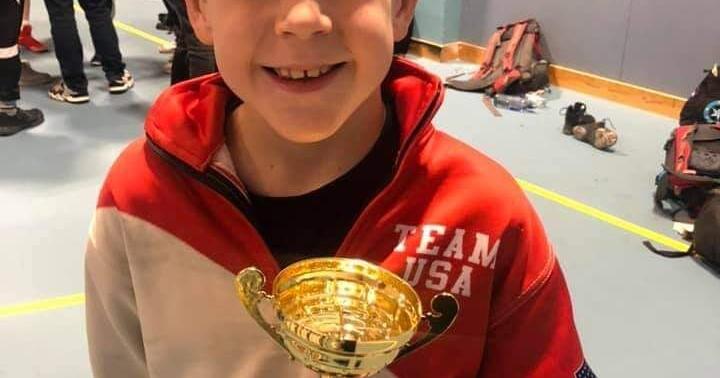 GENEVA – One could say that Zechariah Davis’ achievements began by taking “small steps” that grew into big strides to where he is today – head to head with everyone else who, at the ripe old age of 10 have achieved great goals over the years.

Davis, who will be a fifth grader at Fillmore Central Public Schools this fall, has spent half his life – since he was 4.

He helped represent the United States at the 38th Malarcupen Tournament, a huge annual Greco-Roman wrestling event held in Vasteras, Sweden on November 6-7, 2021 with pre-event training, weigh-ins and events .

Greco-Roman is a style of wrestling that dictates that the legs are not used to reach a fall and no holds are allowed below the waist.

Many countries were represented at the event in Sweden.

Davis was one of 18 athletes to compete for Team USA. Ages ranged from under 11 to senior status, with youth selected from across the country.

Davis was the youngest participant, just 9 years old at the time.

“We were shocked that Zachariah was chosen,” said Rory Davis. “This would be his first time on a plane, his first time leaving the country and the first time being away from his family for so long, so we planned a family trip to Chicago over Halloween weekend just before he did.” departed.”

At the age of 3, a year before he could wrestle officially, Zachariah went to a youth wrestling tournament in Geneva, enjoyed watching and told his father that one day he wanted to do it.

He began wrestling through Fillmore Central’s youth program and after kindergarten, he entered Lincoln’s Competitive Edge Sports Wrestling Academy part-time and for summer camp. He has been training and competing full-time for the club since the second grade. And in first grade, his parents took him to national tournaments in the Midwest.

“On average, he plays 25 to 35 tournaments a year and 70 to 100 games,” said Rory Davis. “His total fights from age 4 to now is 468. For all his efforts he has a lot of trophies and I’m building him a bigger exhibition because we’re almost running out of space.”

Zechariah said he enjoys all the travel.

“It’s honestly just so much fun,” he said. “The experience changes with every trip. Seeing different styles of wrestling helps me develop my own skills. Also, it always makes me happy to see old friends and make new ones.”

The team members and their two coaches departed Chicago’s O’Hare International Airport on November 1 and arrived in Sweden in the early evening hours of November 2, 2021. The flight took a total of 16 hours, including 11 hours in the air and a stopover in Copenhagen, Denmark.

Zachariah enjoyed his first plane ride overall, aside from some turbulence and a bumpy takeoff/landing. His observation of the Swedish weather—it’s been cold and rained at the strangest times—is that it’s kind of the same as Nebraska.

We spent the first three days in a training camp at a local wrestling club in Vasteras and an old Viking burial ground.

Davis said he wrestled three times during the tournament and won one award – the Malarcupen 11u, 31kg, trophy for second place.

“We fought very hard as a team and supported each other in training camp and in the tournament,” said Zachariah. “Team prizes were awarded based on the total points of all wrestlers who competed for the team in all classes. Many of the wrestlers received individual awards and the team placed second overall for the United States. I think everyone who placed at the tournament received either a medal or a trophy. I was proud to be part of the team representing the great USA. It was such an honor and I really hope to represent it even more in the years to come.”

Davis made many new friends with whom he still communicates today and enjoyed all the sights. The group flew out of Sweden on the morning of November 11 and arrived in Chicago at 6 p.m. the next evening.

According to his family, wrestling was good for Zachariah. He hugs him after every game and that has taught him responsibility and maturity. It has even enabled him to help others, as younger Fillmore Central kids learn things by watching him post on Facebook.

“He came home from Sweden with so much pride to represent the country,” said Rory Davis. “He was more confident in himself and his abilities and started formulating his goals for his future at the University of Nebraska and going to the Olympics one day. He’s seen where wrestling can take him and it seems he can’t get enough of those dreams.”

What has kept Zechariah going with his wrestling passion since he was 4 years old?

Rory said he gets a lot of input from his parents not only in his physical training but also in his mindset and mental training. And his coaches at the Nebraska Wrestling Training Center help by forging a close bond with him.

Zachariah said he likes wrestling so much because of the challenge it gives him – which drives him to train harder every day to reach the goals he sets for himself as he feels a drive that drives him pushes you to perform at your best every time he steps on the mat.

Rory and his wife Kelly both came from athletic families. Zachariah got into wrestling early because it was the first sport he could sign up for in Geneva and also because Rory enjoyed wrestling in his youth.

Zachariah will soon have another big wrestling adventure when he travels to India at the end of June.

The Davises are proud of their son.

“He has goals and big dreams for all of this and where it’s going to take him,” Rory said. “We are incredibly proud of everything he has achieved.

“His love of the sport is what blows my mind. I never imagined that one day before fifth grade, the little 46-pound, 4-year-old would travel to two different continents to wrestle. I am in awe of him and his level of maturity.”