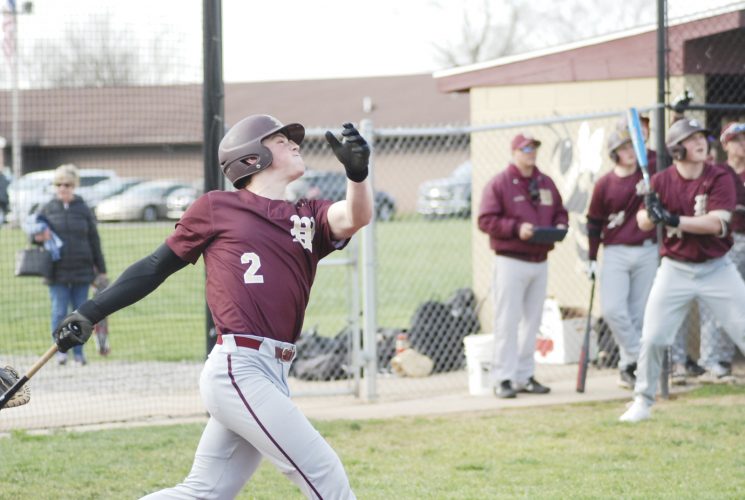 Photo by Jay W. Bennett Williamstown’s Maxwell Molessa follows on a swing during a baseball game this spring. Sophomore Molesaa was named to the All-Little Kanawha Conference first team for the second year running.

Not only did the Silver Knights have a school record 23 wins, but Coach Jones watched as his team secured the first Little Kanawha Conference championship in TCHS history.

Leading that charge was junior left-hander Ty Walton, who was named LKC Player of the Year by league coaches.

“Ty is the kind of player who shows up before everyone at an early Saturday practice session and goes through his entire routine with his bands, weighted balls, stretches and preparing his arm and body. His leadership of the Knights baseball program has been key to our success.”

Walton was the only pitcher to knock out Williamstown, which came during the Silver Knights’ 2-0 triumph in the LKC title game at Glenville’s Sue Morris Sports Complex.

During the season, Walton went 8-2 with a 1.04 earned run average and 107 strikeouts in 53 2-3 innings of work. He only allowed 16 hits. In addition to a .364 batting average, Walton also had eight doubles, two triples, 22 runs batted in, and nine stolen bases.

Walton was one of five repeat selections in the All-LKC top unit. Wahama senior Ethyn Barnitz repeated at the catcher after hitting .391 with seven doubles, a triple, seven homers and 30 RBIs. He also drew 28 free passes and finished with a baseline percentage of .629.

The other trio of returning All-LKC players were infielders – Tyler Consolidated junior Jayden Helmick, Williamstown student Maxwell Molessa and Braxton County senior Tyler Baldwin, who had a .512 average, six doubles, two triples, three steals and 17 RBIs. Helmick hit .424 with four doubles, four triples, two homers, 15 runs batted in, and 30 steals. Molessa, who helped lead the Yellowjackets back to the Class A state tournament, hit .418 with 12 doubles, nine three-baggers, a round tripper and 17 RBIs while making 27 of 27 steal attempts.

Walton was joined at first-team pitcher by Wahama sophomore Bryce Zuspan and Williamstown junior Brayden Coleman. Zuspan was also a key cog in Wahama’s run to the Class A state championship game. He went 11-1 with a 1.80 ERA and struck out 80 in 62 1-3 innings. Coleman was 7-1 with a 2.66 ERA and fanned out 57 in 47 1-3 innings.

Garrett Cunningham, a Ritchie County senior, joined Barnitz as another catcher on the first team. The Rebel hit 38 while hitting .403 with a dozen doubles, a triple and two bombs.

Ravenswood’s Evan Swain, the only freshman on the first team, was selected at Utility. The Red Devils had a 5-0 pitching record with one save and 51 strikeouts in 27 innings. He batted .297 with six doubles and 20 runs batted-in.

Five teams each had two All-LKC second-team selections, including Ravenswood, which landed Anthony Anglin as a catcher and Beau Bennett in the infield. South Harrison had pitcher Josh Thomaschek and infielder Dylan Richards. St. Marys was represented by catcher Josiah DeMoss and outfielder Shane Moran. Williamstown had the second team pick with Carson Hill in outfield and Ty Ott in infield. Doddridge County’s Aiden Eddy was the second team utility and Bulldog teammate Colt Sutton was honored in the infield.