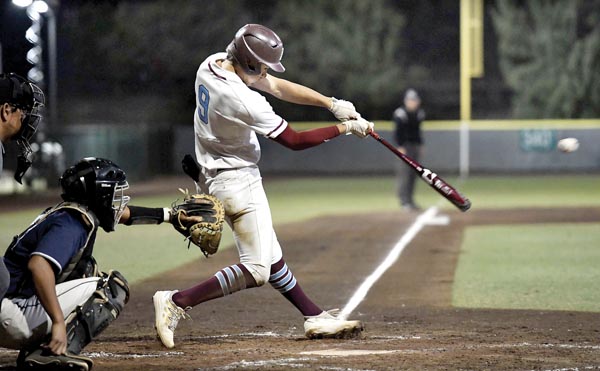 Wehiwa Aloy and Saven Kaahanui are both shortstops and have each made their mark on their powerhouse programs in the Maui Interscholastic League.

The two were selected by the league’s coaches as The Maui News MIL Player of the Year, Aloy in Division I, Kaahanui in Division II. Both players enjoyed two seasons midway through their high school careers that were wiped out by the pandemic.

“It’s very cool, especially being one of the top players on Maui.” Aloy said of the award over the phone while driving with his father Jamie Aloy en route to Medford, Oregon on Wednesday. “And without my team I wouldn’t have been able to do it.”

The Aloys drove to southern Oregon from Sacramento, Calif., because Wehiwa Aloy, who signed with Sacramento State University in the fall, is already playing in a collegiate summer league for the Sacramento Saints.

He will never forget his time as a bear.

“It was really fun being a senior after missing two seasons. We were able to lead our team and also become better leaders, in baseball and in life.” said Aloy. “And our coaches have been a big part of that. You helped us alot.”

The Bears stormed through the MIL DI ranks 14-0 — Aloy hit .311 along the way while leading a steadfast defense — and then defeated Hilo 6-3 and Kailua 17-5 from standing in a game in which Aloy was 4-4 with two runs, five RBIs and a double.

Then the perfect season collapsed in the State Finals, a 3-2 loss to Waiakea. In the championship, Aloy hit a triple and scored the first run of the game in the top end of the fourth inning.

Aloy knows that he and his seven senior colleagues made their impressive mark in founding the program, although he did not leave Baldwin with a state title like his father did in Hawaii in 1995 before a distinguished career.

“I’m pretty sure we helped a lot.” he said. “Especially without those two years, we had to rebuild Baldwin baseball, and that went pretty well last year.”

Aloy, Oto, Honokaupu and Kekahuna are all done as Baldwin Bears.

“It’s time for the next step in my career” said Aloy. “And I will definitely miss it very much.

Kaahanui plans to take a showcase trip to Idaho next month to help find his next baseball target.

Kaahanui said his downtime due to the pandemic has been tough, but he’s grateful to have had a senior season.

The Farmers rolled through the MIL D-II game unbeaten 8-0. They lost both games at the state tournament while battling a team COVID outbreak in Hilo.

“It felt good to be back after missing two years” said Kaahanui. “It felt really good, man. I was excited, I was really excited about how this year was going to end for me.”

“Oh man, I had a lot of fun — I pretty much grew up in little league with this whole team.” said Kaahanui. “We knew each other pretty well and knew how we all play. We all played well this year.”

The MIL Coaches of the Year are Baldwin’s Craig Okita in DI and Molokai’s Keahi Rawlins in D-II.

“It was really fun playing for Coach Buddy (Rawlins),” said Kaahanui. “We did our best to leave our mark on Farmer Baseball. It’s pretty cool. I’ve worked really hard on my game this year, we all have.”