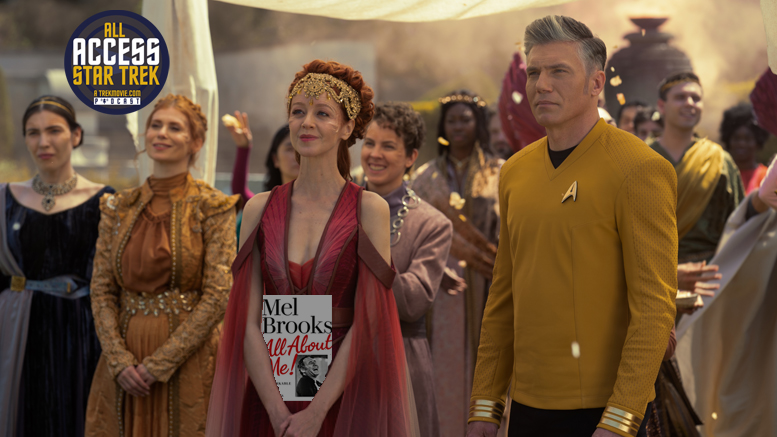 Tony and Laurie kick off FedCon in Germany with an update from Paramount studio boss Brian Robbins on the next Star Trek movie, complemented by Simon Pegg’s “I don’t bloody know” commentary (and enthusiasm to make the movie). Then they discuss Marina Sirtis’ account of the great farewell to the TNG cast Picard Season 3 (compared to how things went Star Trek: Nemesis), Wonder Executive Producer Aaron Waltke’s explanations of the USS Dauntless and the forthcoming return to production of discovery. They recommend the latest episode of The shuttle pod Podcast, talk about the £20 enterprise in the room built by TOMY, then cover the latest news Strange New Worlds, including a guest appearance by Jesse James Keitel, more information on Kirk’s presence in Season 2, and the future appearance of Dr. Roger Korby. Then they dive into their review of SNW Episode 6, “Lift Us Where Suffering Cannot Reach.” You end up looking at wrath of the khan Ice Cream (and other related celebrations) and a surprising Star Trek connection between TOS matte artist Albert Whitlock and the great Mel Brooks.

Marina Sirtis: TNG casts “Cherished” in Star Trek: Picard Season 3 after she was “discarded” in “Nemesis.”

Stratos from “The Cloud Minders” by TOS

Ursula K. Le Guin’s short story The Ones Who Walk Away From Omelas

Tony: Wrath of P’Khan Ice Cream (and others wrath of the khan 40th Anniversary Plans)

Laurie: The Memoirs of Mel Brooks All about me! My remarkable life on the show business

Let us know what you think of the episode in the comments, and if you’re inclined, please review us on Apple.

Stay up to date with everything related to the Star Trek universe at TrekMovie.com.

DISCLAIMER: We may link in our articles to products available for purchase on Amazon; These are customized affiliate links that support TrekMovie by earning a small commission if you shop through them.