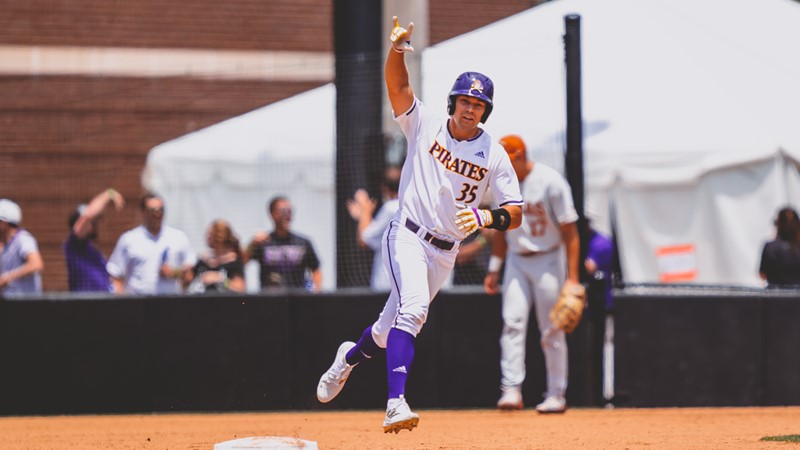 GREENVILLE, NC – The No. 8 National Seed East Carolina, hosting their first Super Regional on campus and in front of a crowd of 5,723, scored five runs in the eighth inning en route to a 13-7 opening win over No. 9 Texas at Lewis Field in the Clark- LeClair Stadium. With the win, the Pirates improved to 46-19 that season (winners in 22 of their last 23 games), while the Longhorns fell to 45-20.

ECU led 8-7 through the end of the eighth inning and had five runs with five hits. After a erratic defensive play to finish the top of the eighth inning, Alec Makarewicz strapped home a solo to start the end of the verse and tip the momentum back toward ECU. He took a 0-1 bid to left center by new Texas pitcher Tristan Stephens, who knocked off Douglas Hodo III’s glove and bounced over the wall. Joey Berini followed by a walk and two batters later Lane Hoover sporadically advancing towards the center Ryder Giles to second place after entering as a pinch runner. Bryson Worrells Fourth hit of the day, a single to right field Giles scored for the second run. A two-RBI double over to right field Jacob Jenkins-Cowart coated Hoover and Worrell while Jacob Starlings The second goal of the competition pushed through Jenkins-Cowart to crown the afternoon’s standings.

CJ Mayhue (6-1) won after allowing four runs (all earned) in five hits with a walk and setting a career-high with nine strikeouts. Zach Agnos earned his third save by throwing two goalless frames in which he gave up one hit and batted one. Trey Yesavage gave up two hits and fanned out one in a third of an inning while Carter Spivey gave up three runs (all earned) on five hits with a walk and a strikeout in 1.2 relief frames.

Texas wasted little time getting onto the board and grabbing two runs in the first set for a 2-0 advantage. Leading with a double down the left field line, Hodo III came around to score to left center on Murphy Stehly’s two-out home run.

ECU answered UT’s first shot with a three-pointer in the home half of the third inning. Agnos walked, Hoover hit a colorful single, and Worrell hit the right field line to get the stanza going. A pass ball scored Agnos and allowed Hoover and Worrell to advance 90 feet before Jenkins-Cowart fired to right center and crossed Hoover and Worrell for the Pirates’ first lead of the contest.

The Pirates extended their lead with three more carries in the fourth and one in the fifth, making it a 7-2 ball game. Ben Newton doubled down the left field line to start the inning and scored when Starling hit his fifth home run of the season, a two-barrel shot to left field. Makarewicz followed with another double down the left field line and Agnos’ singles down the left touchline overpowered Makarewicz. Worrell led in fifth with a solo shot to right center, his 19th this season and 39th of his career.

Back-to-back solo home runs to open the sixth from Ivan Melendez (No. 31) and Stephly (No. 19) drew the Longhorns within three, 7-4. Texas would add another run in the seventh on Hodo III’s ninth roundtripper of the year, reducing the deficit to two, 7-5.

Once again, ECU responded with a run in the home half of the seventh for a three-run advantage, 8-5. Worrell singled through the left touchline, advanced to second on a wild pitch and came around to get home Josh Moylans RBI base knock to right field proved to be a game-winning run.

Texas drew within one, 8-7 after plating a pair in the eighth. Austin Todd grabbed with a blatant single, Skyler Messinger found the center and Silas Ardoin’s ground-rule double into right center was for Todd. After Agnos came into play with bishops in second and third place, Jack O’Dowd landed in second place, beating Messinger.

The two teams return to the diamond for game two of the supraregional round on Saturday, June 11, with the Pirates one win away from reaching the Men’s College World Series. The first pitch is scheduled for 12 noon ET and will be televised ESPN2.