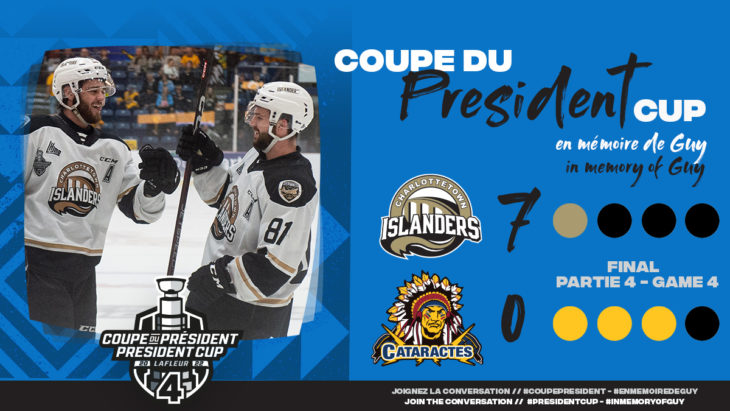 The Charlottetown Islanders are clearly not ready to go home for the season. Instead, they return home for Game 5.

With a dominant 7-0 win over the Shawinigan Cataractes at the Center Gervais Auto on Thursday, the Isles not only extended their season, but the organization claimed their first win in the President’s Cup Final competition.

William Trudeau and Brett Budgell each scored two goals for Charlottetown, who beat the Cataractes 47-16 that night. Individuals came off the sticks from Lukas Cormier, Jakub Brabenec and Patrick Guay. Brabenec added three assists while Xavier Simoneau recorded four of his own. Francesco Lapenna made his first QMJHL playoff shutout of his career while Antoine Coulombe made 29 saves on 34 shots in two thirds for the Cataractes before being relieved by Charles-Antoine Lavallee, who kicked aside 11 of 13 shots.

It was a strong start for the visitors, who turned a 21-8 shot advantage into a 1-0 lead after 20 minutes. After the Isles repeatedly pounded on Coulombe’s door early on, the Isles were rewarded with the lead at the 11:27 mark when Trudeau fired a wrister up the short side of the Cataractes keeper.

The Islanders kept up the pressure throughout the second half and went on to score four times. Lukas Cormier came in and unleashed a shot that Coulombe took a piece of before slamming into the net just 2:10 to double his club’s lead. It was Cormier’s eighth playoff goal and fourth in the past three games.

At 13:13, Budgell joined the action, completing a perfect three-way passing game with Brabenec and Simoneau while holding the advantage. A little over three minutes later, the Isles extended their lead to 4-0 when Trudeau switched from defense to offense and Coulombe scored to bring home his sixth of the playoffs.

Brabenec capped things off with the Islanders on an extended power play, tapping in a slap pass from Patrick Guay with 44 seconds left for his third of the postseason. The Isles finished the middle frame by overtaking the Cataracts 13-5 to take a 5-0 lead.

It was similar in the third period. Budgell would record his second of the game and 12th on another Islanders power play of the postseason and once again finished a game with Simoneau and Brabenec at the 6:23 mark. Guay would add some firepower on the power play, converting from the slot at 4:39 p.m. to end scoring.

The Cataractes maintain a 3-1 lead in the best-of-seven championship series that resumes Saturday at 4:00 p.m. ET/5:00 p.m. AT at the Eastlink Center in Charlottetown. All games can be seen on CHL TV.